ESPN’s Mel Kiper has released his second mock for the 2022 NFL Draft.

Coming off a four-win season in which the Giants rolled the dice with the wrong coaching staff, wrong general manager, and showed their gratitude to loyal season-ticket holders by giving them a free medium Pepsi, this once-proud franchise needs great assistance.

Luckily, the organization owns nine picks in the 2022 NFL Draft, including two in the first round.

That opening round of April’s event will be extremely critical — the Giants cannot screw up the first-round picks like they have in the past.

Mel Kiper, ESPN’s draft analyst, has revealed his second mock. Who does he have Big Blue taking with its pair of Day 1 choices? 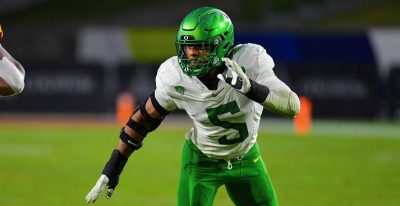 Kiper’s Take: “If the draft plays out like this and both of the top offensive tackles are off the board before the Giants pick, taking a defender makes the most sense. And if Thibodeaux is available, he’d be a perfect fit for a New York defense that needs to pair a true edge rusher with rookie Azeez Ojulari, who led the team with eight sacks last season. Thibodeaux has to improve his all-around game, but he has outstanding physical tools as a pass-rusher. He had seven sacks last season and put up the second-best pressure rate in the country (17.8%). If he comes close to his ceiling, he’ll make multiple All-Pro teams.

“The Giants have some nice pieces to build around for new general manager Joe Schoen and coach Brian Daboll, but they’re not going to be able to acquire an edge rusher like Thibodeaux anywhere other than the draft. We could look back at this pick in five years and consider it a steal.”

Our Take: I know what you’re going to say — no way Kayvon Thibodeaux slides to the Giants at No. 5.

But given the talents of Michigan edge rusher Aidan Hutchinson and Notre Dame safety Kyle Hamilton along with multiple teams’ needs for an offensive tackle in the top four, there certainly is a possibility Thibodeaux remains available when the fifth pick comes along.

But in my opinion, there’s a chance he could also be available for the Giants at No. 7, which is why I don’t agree with taking him here.

Barring any sort of trade, the Panthers will be choosing at No. 6 and aren’t likely to seek an edge rusher in the first round. Carolina’s defense is a strength of its team and the unit finished second in ESPN‘s pass rush win rate metric (51%) last year. The Panthers will either need an offensive tackle in the first round to protect Sam Darnold or a quarterback to eventually replace Sam Darnold.

The Giants should address the right tackle position right off the bat and could still land Thibodeaux at No. 7.

Kiper’s Take: “With the Giants’ second top-10 pick, I’m going all-in on improving the front seven of the defense. Lloyd is a middle linebacker, yes, but he does so much more. He had 111 total tackles, eight sacks, 20 tackles for loss, four interceptions and a forced fumble last season. He had 16.5 total sacks over the past three seasons. Lloyd (and No. 5 pick Kayvon Thibodeaux) can add some pass-rush upside to a team that desperately needs it. If New York does take Lloyd here, that probably means Blake Martinez, who tore his left ACL in September, will be a salary-cap casualty.

“The Giants are going to have to address their offensive line at some point this offseason, and I also thought about center Tyler Linderbaum here.”

I understand Devin Lloyd is talented and sports on-field versatility, but if the Giants are going to draft an edge rusher at No. 5, they will need to address the offensive line with the second of their two opening-round picks.

If Evan Neal (Alabama OT), Ikem Ekwonu (NC State OT), and Charles Cross (Mississippi State OT) are all off the board at No. 7, then they might as well trade back from the seventh pick and look to draft either Tyler Linderbaum (Iowa iOL), Trevor Penning (Northern Iowa OT), or Kenyon Green (Texas A&M OT) later on in the first round.

I wouldn’t address the inside linebacker role until the third round.

Giants missing multiple starters for Week 4. Who must step up?