The good, the bad, and the ugly of an Islanders that’s seen it all go wrong.

It’s not impossible, but through half of the 2021-22 season, it looks like the New York Islanders streak of making it to the Eastern Conference Final will end at two.

It also looks like their playoff streak will end at three. Disappointing play, a pretty terrible offseason, and a COVID outbreak that was completely mishandled by the NHL have the Islanders sitting well out of a playoff spot. The fact that they play in the hardest division in the league makes the playoffs even more of a reach.

Numerically speaking, they’re still in it, but it doesn’t look good for a team that was a juggernaut a few months ago. Several factors have contributed to what we’re seeing from the Islanders, but which players have stood out the most, both good and bad?

Let’s give out some midseason awards to the 2021-22 Islanders.

As easy as pie. The 2022 All-Star is the Islanders’ best player this season and deserves credit for practically any and all success the team has had.

For some time but especially now, Pelech has defined what it means to be an MVP. He is unbelievably valuable to his team and the Islanders don’t look even remotely as good without him. 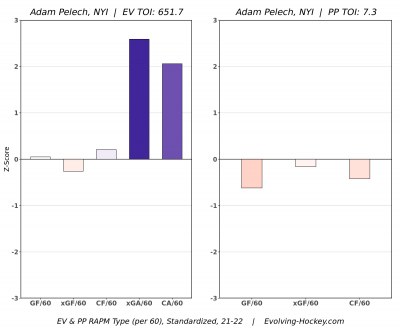 Every time I write about Pelech, I note that he’s one of the best and most underrated defensive-defensemen in hockey. That’s still the case, but he’s added a bit of offense to his game this season. 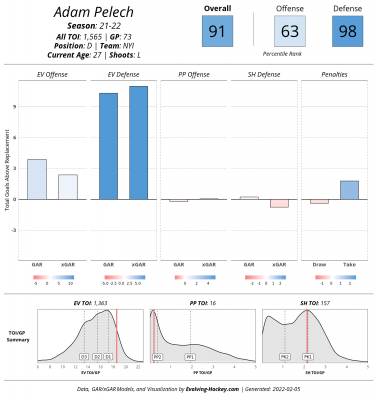 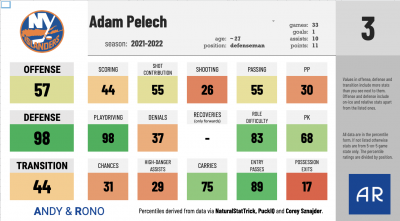 The Islanders were wise to hold onto Pelech for so long. It really doesn’t get much better than him when it comes to top-flight defensemen who are rock-solid in their own zone.

If you thought Palmieri was bad last season… Palmieri being the undisputed worst player on an Islanders team with several players who are having bad seasons is a problem.

Palmieri is a very talented offensive player and is still showing flashes of his ability, even now. 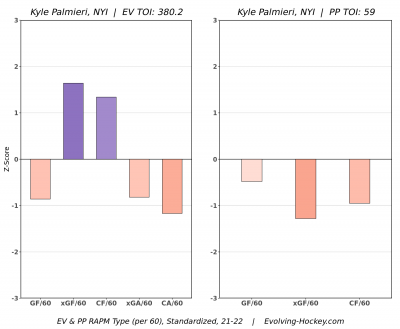 However, the goals aren’t there. When you sign one of the most underrated goal-scorers who usually averages between 25 and 30 a season, you expect him to do just that. Or at least come close. Palmieri has one goal in 29 games this season.

Some guys end up scoring less, but doing more in terms of playmaking and put up more assists. Not Palmieri, who has just six on the season. 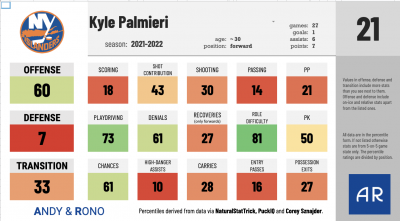 The fact that Palmieri looks lost in his own zone doesn’t help, either. It’s like nothing is going right for the veteran and his struggles are a key reason why the Islanders aren’t getting it done this season. 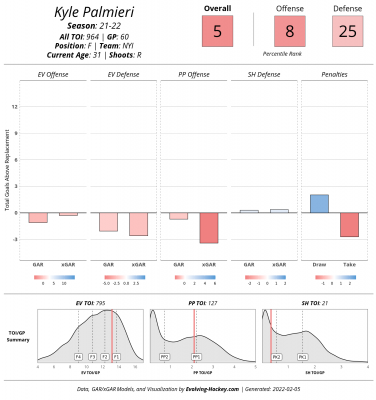 Palmieri has been the team’s worst and least valuable player this season across the board. Oh, and he’s making $5 million over the next three years.

We knew Sorokin was legitimate last season, but the way he’s become one of the top goaltenders in the league in a matter of months is remarkable. Sorokin is also an MVP for this team and has kept them in games they have no business being in. 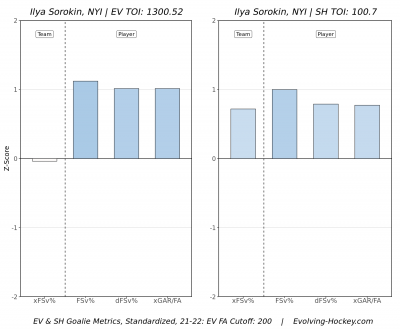 The Islanders have known for some time that Sorokin is their netminder for the long-term future and that’s becoming more so the case by the day.

Sorokin is top-10 in goals saved above expected and gets the job done both at even-strength and while short-handed. 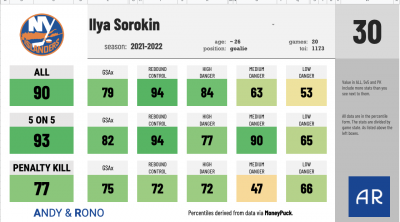 There isn’t much the young goalie can’t do and the fact that he keeps getting better and better really is impressive.

A well-deserved honorable mention for most impressive is RHD Scott Mayfield. He was going to have to step up with the departure of his partner, Nick Leddy, and has done just that.

Mayfield has become one of the team’s best defensemen and most important players. The progress he’s made is incredibly encouraging.

For obvious reasons, no Islander has been more disappointing than Palmieri.

The Islanders needed a top-six scorer to take them to the next level. As an elite defensive force with a solid but not top-tier offense, they prioritized getting a winger who could score at a high rate.

That’s why they went out and got Palmieri and allowed Jordan Eberle to be claimed by the Seattle Kraken. That has completely backfired and the move couldn’t have possibly gone more wrong for New York.

Palmieri has regressed in the worst way possible and the Islanders went and extended him, too. The Islanders botched what was one of the most important moves they could’ve made and it might hurt them for several seasons to come.

Unlike Palmieri, Parise is a veteran forward who’s actually played pretty well and has been valuable to the team. That makes him the team’s best newcomer, although it isn’t saying much.

The only other option for this honor would’ve been Zdeno Chára, who’s been much better lately but hasn’t had the overall season that Parise has.

Parise has done well in terms of playmaking and provides offensive value that many of his teammates aren’t. 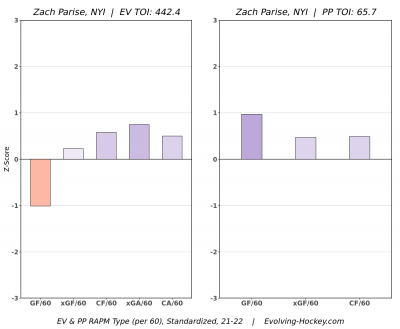 He’s even looked pretty awesome in his own zone, which is actually quite shocking. Parise has been defensively abysmal throughout his career, so it’s surprising but exciting to see him play so well in front of his goal. 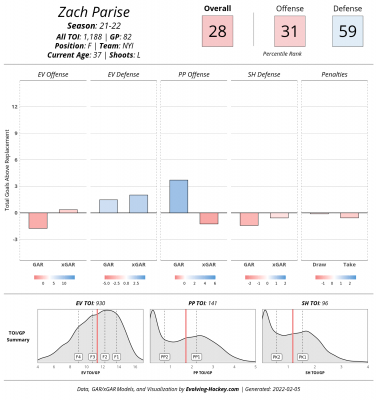 However, like Palmieri, the goals are the problem for Parise this season and are, therefore, a problem for the Islanders. Parise has just three goals and 13 points in 39 games this season.

Parise has also been known for his fantastic scoring ability and the Islanders hoped that he could get back to that after a down year last season. Unfortunately, although he has played well, that hasn’t been the case.

The fact that Parise isn’t scoring is definitely concerning and is a reason why the Islanders are stuck in a rut, but taking a chance on the veteran who struggled in his last season with the Minnesota Wild was the right move.

What he’s provided has been extremely valuable, especially with so many of his teammates slumping.