Another day, another prospect ranking release.

Usually the elite prospects are pretty clear; the players who rank between one and five or ten are generally the same names, but maybe the position in the top ten is different.

But as you wander (not Franco) down the list, you start to really see where the differences in opinion appear.

On Wednesday we looked at how Baseball America’s Top 100 prospect rankings considered the top talent in the Yankees and Mets systems. Each of our teams had three players rank in BA‘s top 100.

Thursday morning brought an updated Top 101 from Baseball Prospectus. And their view of New York’s top prospects is very different than Baseball America‘s.

Here’s where they rank the top prospects for the Yankees and Mets, respectively.

Two huge thoughts immediately when looking at the three Yankees prospects on the list: first, where the hell is Jasson Dominguez? And secondly, welcome to the rankings world Randy Vazquez!

Dominguez is walking a fine line between potential superstar and urban legend at this point. We have pause when anointing him the next a) Mike Trout, or B) Kevin Maas because of the impact the pandemic has had on every international signee from 2019 and 2020 and the 2020 draft class. We’re still optimistic about his long-term future.

Vazquez is a fascinating inclusion from Baseball Prospectus. The 23-year-old righty signed with the Yankees in 2018 and finished 2021 ranked 20th in the Yankees’ system by MLB Pipeline. Vazquez didn’t crack the Yankees’ preseason top 10 for Baseball America, either. 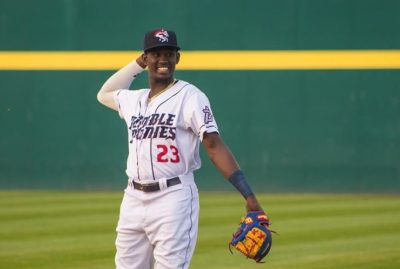 The same three names for the Mets appear in this list as did for BA. However, Baseball Prospectus is significantly higher on Baty than BA. In fact, BP has two Mets prospects ranked higher than the Yankees’ top prospect, Volpe.

And, again, we’re fascinated to see how the Mets handle the future with Mauricio. He isn’t far away from being ready for Citi Field, but with Francisco Lindor signed long-term at short he’ll either need a new position or a new team signing his paychecks to get to the big leagues.