Who are the best youngsters in the oldest organization in the NHL?

The New York Islanders are the oldest team in the NHL. That usually isn’t a great thing, but they’ve made it to the Eastern Conference Final the past two seasons. Who knows what they could’ve done had they not had to face the best team in the league.

Because the Islanders have been one of the most successful teams in the league over the past few seasons, they haven’t felt the need to get any younger. In fact, they’ve actually been getting older.

Even though this is the case, the organization does have some younger guys who have done well and/or have very promising outlooks.

With that being said, who are the Islanders’ best under-24 guys?

First up is one of the newest members of the Islanders organization. Lennox, who was taken in the most recent draft, was one of the most promising goaltenders in his class.

He almost immediately became one of the Islanders’ top prospects as well as their best goaltending prospect.

The fact that the OHL never played a season last year definitely didn’t help Lennox in term of development, but he’s talented and young enough to make up for it.

Lennox is a big goalie, standing at 6’4″, and opponents have a tough time getting pucks past him.

It will likely be some time before we see Lennox in the NHL, but he definitely has the potential to not only make it to that level, but to also succeed.

Taken with the Islanders’ first pick of the 2019 draft, Holmström was a questionable pick at the time and we’re still seeing why.

Holmström was good for Sweden in the World Juniors, averaging a point per game, and has shown improvement in his third AHL season but, as his performance in these tournaments and leagues indicate, he doesn’t score goals and is very hesitant to shoot the puck.

Holmström has shown potential as a playmaker, but the Islanders are going to want more goals from him. At the very least, they’d like to see him take more shots.

The fact that a former first-round pick isn’t a top prospect in a bad pipeline isn’t ideal, but Holmström is still young and improving and does have a high ceiling.

Don’t let his numbers fool you. Wilde is a solid two-way defenseman, he just hasn’t really been relied on to score. He’s a good skater, good in transition, has a lethal shot, is a good passer, and is capable of doing damage on the power play.

Wilde’s defensive game is still a work in progress and the Islanders are in no rush to perfect his game. Wilde’s refusal to receive the COVID-19 vaccine saw him get sent to Sweden on loan for the season as his development continues.

Koivula is the first player on our list to already have seen playing time at the NHL-level. He played 12 games with the Islanders during the 2019-20 season, but is yet to earn his first point.

At 6’5″, Koivula isn’t a good skater and isn’t fast, but he’s very physical and does well in front of the net. He also has a high hockey IQ. Skating is, by far, Koivula’s most glaring issue, one that he must keep working on and prioritize in the AHL.

Because Koivula is so physical and does very well in his own zone, he could have a future as a solid bottom-six winger. However, his skating really must improve before the Islanders deem him ready to play consistently at the top-level.

The fact that the Islanders are so good and are in win-now mode isn’t great for Bellows. By now, the young winger would already be a regular fixture in most lineups, but the Islanders want more experienced guys as they try to bring home the cup.

Bellows has the potential to be a very good goal-scorer. He’s been nothing but good in his limited playing time in the NHL.

Bellows found himself back in the Islanders’ lineup last week because of the team’s serious COVID-19 issues and was actually one of their very best players before testing positive himself.

Because he can’t seem to crack Barry Trotz’s lineup barring injuries and get more playing time, his name has been mentioned in trade talks for some time. Bellows is NHL-ready and his time to really shine shouldn’t be far off.

Bolduc is still looking for his first point of the season, but he’s a strong, two-way defenseman. Bolduc is big, a good and fast skater, and makes smart decisions in both zones.

He has room to grow, but it shouldn’t be long before the talented blueliner is NHL-ready. He’s one of the team’s top prospects and has the potential to be a successful top-four defenseman.

Salo’s current stint with the big club is just the beginning. It’s become pretty clear that he’s going to be a key member of the Islanders’ blueline of the future, specifically their top-four.

The fact that he was called up ahead of Bolduc amid the team’s COVID-19 issues indicates that the Islanders value his experience and believe he’s almost ready to play regularly on the grandest stage.

Salo will likely never be an elite scorer, but he’s very smart offensively and is great in his own zone.

Salo is a well-rounded player with a high ceiling and is going to be expected to do big things for the Islanders once he becomes a regular member of the lineup.

At number three, we have the best prospect in the Islanders organization.

Once regarded as the top prospect in his class, Räty’s love for the game began to dissipate (albeit temporarily) during his draft year, and it showed in his game. As a result, he fell to the beginning of the second round, just in time for the Islanders to grab him.

Räty almost immediately began to look like the steal of the 2021 draft. He had a rough start to his professional career post-draft and ended up being traded from Kärpat to Jukurit, but has been on fire since.

Räty is a well-rounded, two-way forward with an unbelievably high ceiling. If everything goes according to plan, he won’t need much time before he’s NHL-ready. What a pick this was for the Islanders. Räty should end up becoming a stud.

We now move on to a guy who is already a staple in the Islanders’ lineup. Dobson made his NHL debut in the 2019-20 season and has been one of the team’s top-six defensemen since. Dobson hasn’t really met expectations yet, but his importance to the team is clear.

Unfortunately, he hasn’t had the luck of being assigned particularly good defensive partners. Over the past two seasons, he’s seen most of his playing time come alongside the aging veterans Andy Greene and Zdeno Chára. 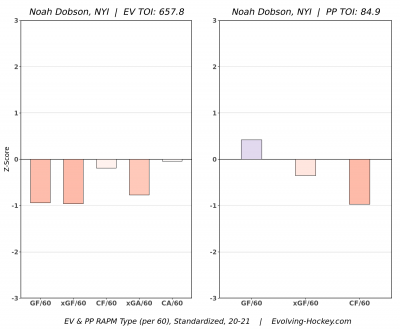 Dobson has struggled in his own zone, but has been improving offensively. He’s still looking for his first goal of the season, but looks much better in the offensive zone than he did last season. 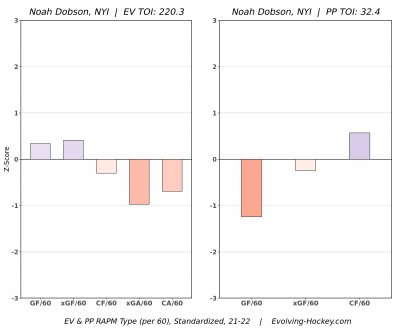 The good news for Dobson is that he’s still quite young and has time to keep getting better. For now, the Islanders like what they’ve seen from him and consider him to be the best young defenseman in the organization.

Also taken in the first round of the 2018 draft, Wahlstrom is the best youngster in the Islanders organization. He played his first full NHL season in 2020-21, when he really broke out.

Wahlstrom was a strong two-way forward who became the team’s regular third-line RW and ended the season as one of the most important power play guys New York had. 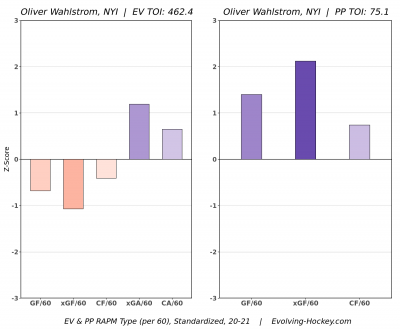 He played so well that he’s officially a regular fixture in the lineup and hasn’t looked back since playing so well last season.

The Islanders aren’t in the best of places right now, but Wahlstrom has actually played well in the young season and continues to show that he’s the real deal. 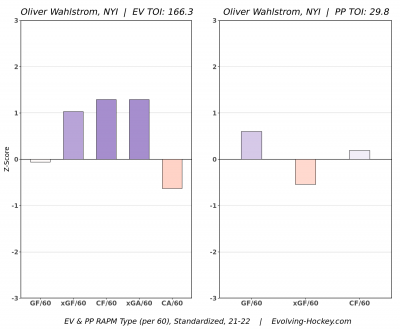 The Islanders clearly love this kid and consider him to be an important part of the future, a fair judgment since he’s done nothing but impress over the past season or so.