Who are the best players in the Devils organization under the age of 24?

The New Jersey Devils are the second-youngest team in the NHL. It sometimes shows, but the team has improved significantly since last season, when they were a bottom-five team in the league.

The Devils have looked impressive to start the season and give every team they play a hard time, whether their opponents are good or bad.

The team is good, but so is their farm. The organization has promising youngsters in North America and Europe, which leaves the Devils in a great position with an even better outlook.

The Devils have some impressive youngsters, but who are the best of them? Let’s take a look at New Jersey’s top-10 players under 24 years of age.

The youngest Hughes and brother of Devils star Jack, Luke might just be the organization’s best prospect. The 18-year-old blueliner was one of the best prospects of the 2021 draft class. The class was a weak one, but Hughes’ is talent is clear.

The Devils drafted him with the fourth overall pick and the kid has impressed since.

Hughes is a solid offensive-defenseman, capable of getting the job done in his own zone while putting up points. He’s an excellent skater and great playmaker. Hughes handles the puck well and has a high IQ.

Hughes is currently in his first season at the University of Michigan. Through 14 games in the NCAA season, Hughes has six goals and 13 points.

Hughes is the only player on this list who has yet to make his NHL debut. That’s testament to just how good he’s been.

At just 18 years old, he’s already better than the majority of youngsters in the organization and his ceiling is sky-high. At this rate, it shouldn’t be long before he’s a staple in New Jersey’s blueline.

Next up is the Devils’ first pick of the 2020 draft.The young Swede’s elite shot makes him a dangerous goal-scorer. With Djurgårdens IF of the SHL last season, Holtz scored seven goals and 18 points in 40 games.

Holtz began this season in the AHL and scored five goals in four games. He played in six NHL games since being called up at the beginning of November. He has two assists and is still searching for his first goal.

Things haven’t exactly gone smoothly for the 19-year-old since making his NHL debut. He was scratched a few times before being sent back down to the Utica Comets on Tuesday.

However, he’s still at the beginning of his career and his ceiling is so high.

He has the potential of possessing one of the most lethal shots in the game and just needs time to grow, something he would be better off doing in the AHL against less overwhelming competition.

Kuokkanen is our first regular in the Devils’ lineup. Taken in the second round of the 2016 draft by the Carolina Hurricanes, Kuokkanen was traded to the Devils because of his inability to get playing time in Carolina.

Kuokkanen began last season on loan to Kärpät of Liiga in his home country of Finland. In 16 games, he scored three goals and seven points.

He then joined the Devils and hasn’t looked back since. Kuokkanen was respectable in his first full NHL season, scoring eight goals and 25 points in 50 games. 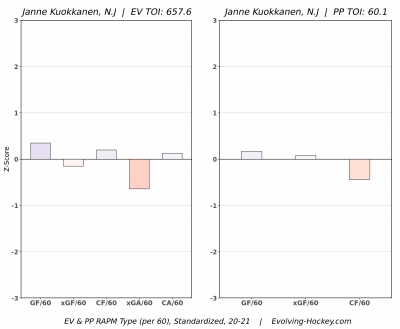 He really showed his versatility: he’s able to play up and down the lineup and can play any forward position, but is best on the wing.

Unfortunately, Kuokkanen has struggled to begin the 2021-22 season, offensively but especially in his own zone. 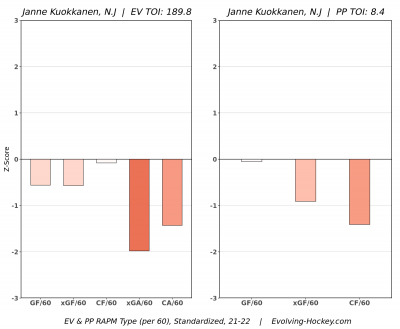 Even so, the 23-year-old has become a staple in this lineup and is a key bottom-six forward who still has potential.

The Devils’ 12th overall pick of the 2016 draft, McLeod played his first full NHL season in 2020-21. Since the beginning of his rookie season, McLeod has established himself as an important bottom-six center for this Devils team.

With nine goals and 17 points in 68 games since, McLeod is more of a defensive forward, although he isn’t exactly perfect in his own zone. McLeod definitely has flaws in his game, but the 23-year-old, like Kuokkanen, is currently a key member of this team.

Sharangovich’s rookie season, 2021-22, was a successful one. He scored an impressive 16 goals and 30 points in 54 games and established himself as a serious offensive threat on his team.

Sharangovich was slow to get going this season, not scoring his first goal of the season until Nov. 20 against the Tampa Bay Lightning. However, Sharangovich was phenomenal in that game and it could be a sign of great things to come.

Although he’s had trouble getting on the board, Sharangovich has improved his game in some aspects. He was quite poor in his own zone last year, but hasn’t struggled nearly as much in that regard this season. 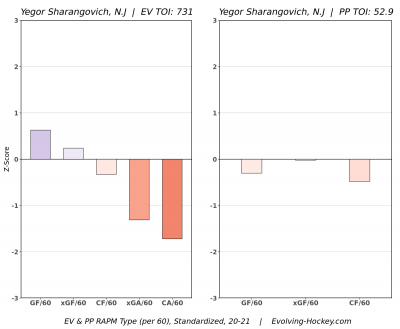 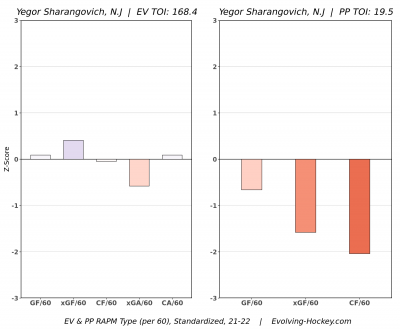 The goals will come for the talented 23-year-old, so it’s good that he’s been able to work on another part of his game while he waits for the rest to come back.

Sharangovich is also valuable because of the fact that he can play any forward position. He has the potential to become an important part of the team’s middle-six, he’s already almost there.

Smith was a bright spot on one of the worst team’s in the league last season. Expectations were pretty high for the skilled blueliner, but he exceeded them.

Unfortunately, Smith has had an ugly start to the 2021-22 season, both offensively and defensively, but it’s a matter of time before he turns things around. We’ve seen what he’s capable of.

It’s only up for here for the 21-year-old who is close to becoming a key piece of the Devils’ blueline.

It’s all been about the young Dawson Mercer, lately. In Jack Hughes’ absence, Mercer has stepped up as one of the team’s best forwards/players and top-scorers.

The 18th overall pick of the 2020 draft has been nothing short of exceptional since becoming part of the organization. He just kept getting better and better and never hit a roadblock.

He did so well in the QMJHL last season as well as for Team Canada in the WJC (when he was one of their best players) that he earned a spot on the Devils out of training camp. It was unexpected, but the right move.

Mercer has done well individually (he’s tied for the team-lead in points) and has made the players around him better.

He’s a reason why the Devils’ second line has been their best and much of the team’s recent success can be attributed to his truly fantastic play. 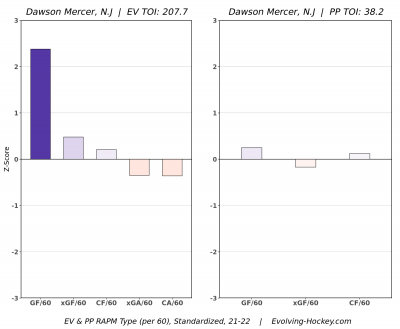 The fact that he’s just 20 years old is incredible. At this rate, Mercer is going to be a core piece of this rebuilding yet improving Devils team.

Up next we have the Devils’ captain. A former first pick, Hischier has been slowed down over the years because of injuries, and it’s been quite refreshing to see him healthy so far in this young season.

Hischier hasn’t really been lightning up the scoreboard- he has two goals and 10 points in 16 games. However, he’s been driving play very well and has been very strong in his own zone. 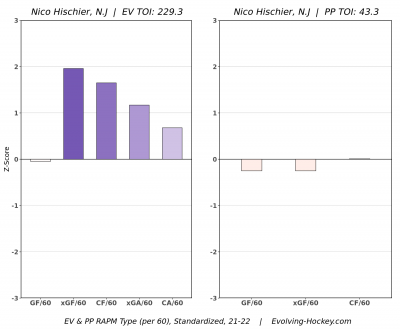 It’s difficult to complain about Hischier’s play, so far, and it’s hard to believe the points aren’t going to come soon.

Anyone who watches hockey knows what Hischier is capable of and that he’s a tremendous young talent who has the potential to be a top youngster in the league if he can stay healthy.

Few Devils are nearly as important as the 22-year-old and the fact that he was named captain at such a young age is indicative of that.

Who would’ve thought Bratt would end up being considered a better youngster than Hischier.

Looking at their overall careers, Hischier obviously takes the cake, but Bratt is currently red-hot and has been arguably the team’s best player over the last few weeks.

A former sixth-round pick, Bratt has been regarded as a draft steal and really proved that last season, when he truly broke out. 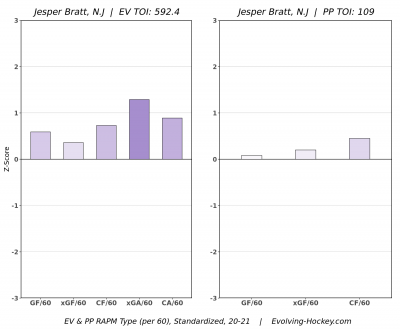 He’s only gotten better since. Bratt has been phenomenal all over the ice: he’s tied for the team-lead in points with his linemate, Mercer, and has been exceptional in his own zone. 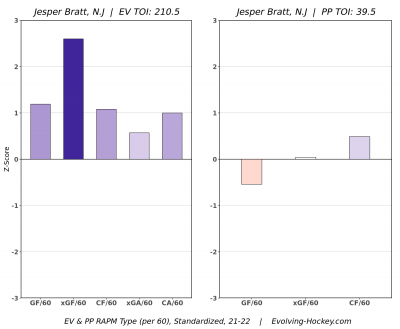 Bratt has always been a great two-way forward, but now he’s combined his solid defensive play with unprecedented scoring. The 23-year-old appears to be the real deal and the fact that he’s so young and still getting better is exciting and encouraging.

He’s played just two games this season and is dealing with a serious injury, but starboy Jack Hughes is the Devils’ best youngster.

The first pick of the 2019 draft had incredibly high expectations coming into the league and struggled mightily in his rookie season. 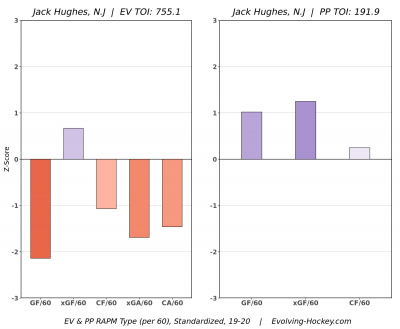 However, he left that season behind him and was fantastic in his sophomore campaign. Hughes scored 11 goals and 31 points in 56 games last season.

He did everything well in the offensive zone and was even better defensively, something that was a big problem for him his rookie year. 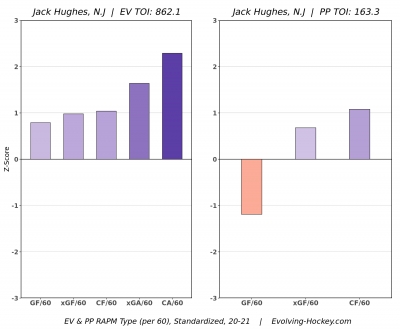 Hughes has barely played this season, but looked like he hasn’t slow down at all since last season. That’s clear in the three points he’s already scored.

There’s a case to be made that Hughes is the team’s best player and although the Devils have fared will without him, he is missed. Everything about the Devils- offense, defense, and special teams- will improve when the 20-year-old makes his long-awaited return.