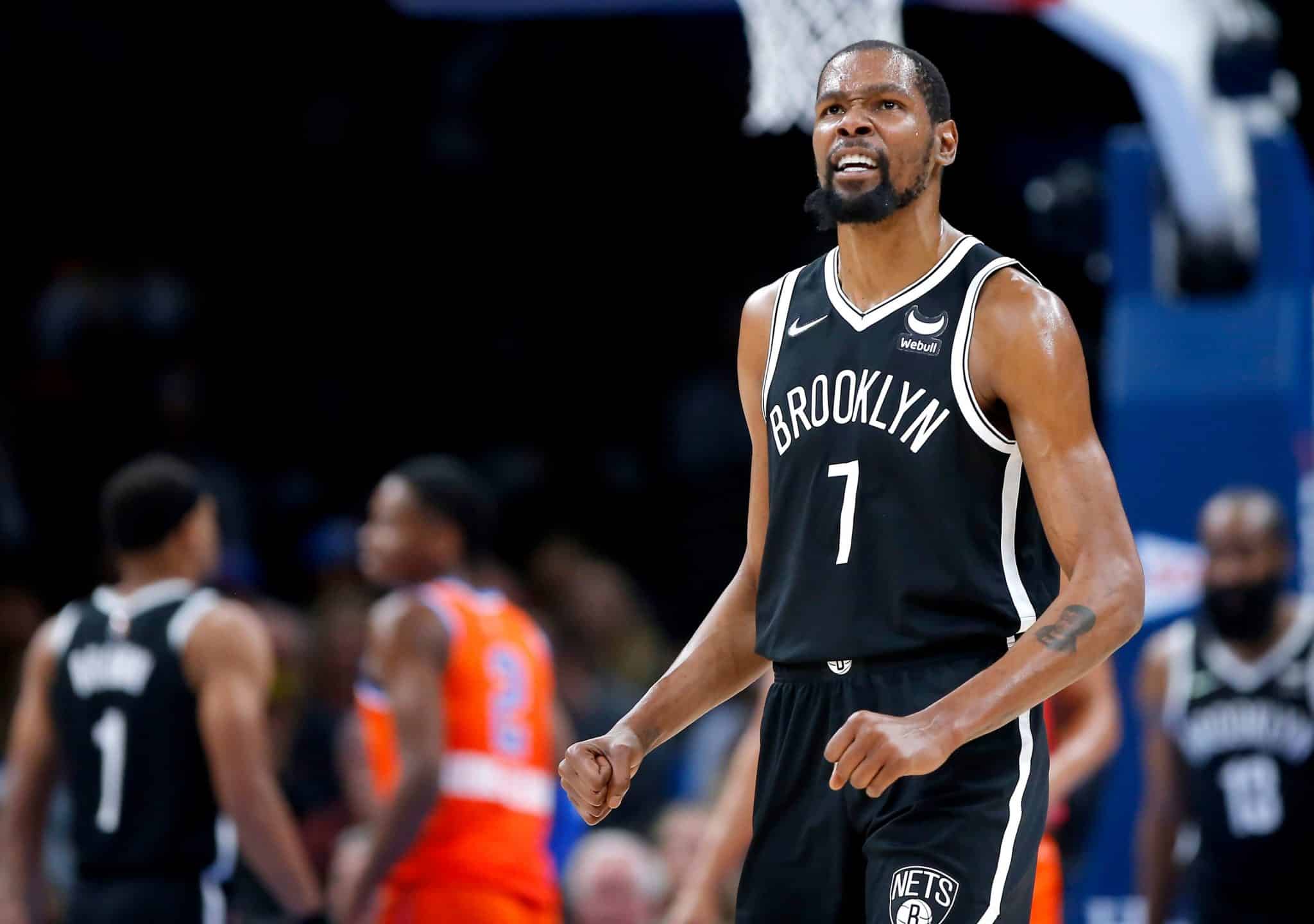 Brooklyn finishes their road trip with a statement win.

It’ll be a happy flight home for the Nets as they end their long 6-game road trip with a resounding win against a streaking Oklahoma City Thunder team.

Even with Joe Harris going down to an ankle injury in the second quarter the team didn’t miss a beat en route to a 120-96 victory thus securing a 5-1 record on their arduous trip.

Sunday evening was the first time Kevin Durant and James Harden shared the court as teammates in Oklahoma City since their days with the Thunder.

The two were serenaded with a chorus of boos during player introductions but it didn’t seem to phase them. Durant (33 points, 8 rebounds) came out the gate hot per usual. He had the team’s first two buckets including a thunderous baseline slam which silenced the boos. It wasn’t an overly efficient shooting night (9-17) but Durant did sink 13 of his 14 free throw attempts.

Harden (16 points, 13 assists) would do his damage from a facilitating standpoint. He dished out 4 dimes in the opening frame and had 7 by halftime. The Beard was also active on the defensive end collecting 3 first-half steals as well. Turnovers still plagued Harden as the Nets superstar totaled 6 turnovers for the third straight game.

The unsung hero however was the man from down under Patty Mills. Friday night the hot hand from deep belonged to Joe Harris. Sunday evening, however, Mills was the one with the golden touch. Mills’ first basket of the game, which was a buzzer-beater at the end of the 1st quarter, was the start of an epic night.

Patty put up a three-point barrage in the second quarter knocking down four long balls as he helped a Nets bench unit that had struggled to produce offense early in the quarter. He also impacted the game on the defensive end drawing a couple of charges.

With Joe Harris out, Mills would start the second half and pick up where he left off. The Aussie would go on to finish 9-12 from distance which was capped off by back-to-back threes late in the 4th quarter to shut the door on any hopes of a Thunder comeback.

Patty has been BLISTERING tonight 🔥🔥🔥🔥🔥🔥🔥 pic.twitter.com/wmAm1PMaxw

After a string of poor offensive outings as of late, Mills’ 29-point explosion may just be the jumping-off point he needed. It will be interesting to see how his role changes with the uncertainty around Harris’ ankle injury.

As mentioned before the Nets finish up their road trip 5-1. It’s just the third time in franchise history the team had 5 wins on a road trip. One of which came last season. Although the level of competition wasn’t the toughest, it’s still an impressive feat taking care of business away from home.

Brooklyn will return home for two daunting matchups as they face the top-seeded Warriors and the surprise Cavaliers.