In traditional Islanders fashion, the defense is shining.

The New York Islanders didn’t exactly pick up where they left off at the beginning of the season.

For the second consecutive season, they had an impressive playoff run, making it to the Eastern Conference Final. Surprisingly, however, the Islanders struggled to begin the 2021-22 season just a few months later.

LHD Nick Leddy was traded during the offseason and his absence was glaring. Last season, he was second among all Islanders skaters in TOI, fifth among all skaters and first among defensemen in points, and first on the team in assists.

This is a significant loss.

The Islanders have exhibited several issues in this young season and defense has been one, a surprising one. The Islanders are one of the absolute best defensive teams in the NHL, so their defensive struggles were surprising and slightly concerning.

However, the team has been turning things around and look much better than they did to begin the season. Their goaltending has improved and they’ve been scoring, but the real improvement has been in the defense.

The Islanders are coming off two straight losses, both of which weren’t pretty and saw New York give up a lot of goals. However, the defense has been much better as of late and the Islanders are back to being one of the best defensive teams in the league.

That’s why their best players this season have been their defensemen.

The Islanders played just one game this week, a 4-0 loss to the New Jersey Devils on Thursday. Pulock was the team’s best player in that brutal loss.

One of the Islanders’ best players, Pulock showed why he holds that honor in this game. The team gave up too many goals and didn’t score any themselves, but Pulock played well, and not even just relatively compared to his teammates.

He was the third-best overall player in the game as well as the second-best skater.

Pulock has been strong to start the season, at even-strength as well as special teams. 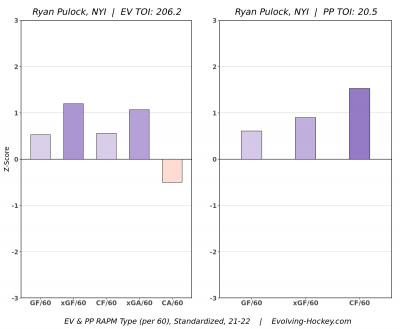 Chára was dreadful to begin the season and he looked like he was 44 years old over the stretch of several games. However, moving him to play alongside Pulock proved to be an excellent move and the two have done quite well together.

Chára was even the Islanders’ second-best player on Thursday, after his linemate, Pulock.

Pulock playing consistently at this level will be nothing but beneficial to the blueline, his goalies, and the team, as a whole.

We’ve said time and time again that Pelech is one of the best defensive-defensemen as well as one of the most underrated players in the NHL.

He plays the game at such an elite level and the fact that he’s been the Islanders’ best player to begin the 2020-21 season is proof.

Here are some of Pelech’s season stats from Hockey Stat Cards: 21:03 TOI, 2 A, 0.72 iXG, and 1.10 average Game Score. Pelech only has two points in the season, both assists, but he’s been impactful in the offensive zone and has been even better in his own zone. 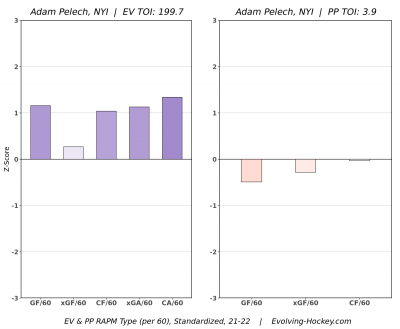 Pelech’s average Game Score is, by far, the best on the team (the second-highest average GS is Brock Nelson’s 0.94).

Things weren’t working for the Islanders defensively, so head coach Barry Trotz had to split up the Pelech-Pulock pairing, which had been one of the best in the NHL. Each of these two players is so good that they’ve made their new linemates good, too.

As we mentioned, Pulock has gotten Chára back into form and Scott Mayfield has been much better since teaming up with Pelech.

It’s quite impressive that Pelech has had such a positive impact on Mayfield, who had looked lost since the departure of his former linemate, Leddy.

It’s no surprise that Pelech, who’s almost always one of the team’s best players, is doing so well this season and we should expect him to maintain such an elite level of play.