Just days after a New York Post report that claimed the New York Gaming Commission had made a decision on which sportsbooks would be granted online sports betting rights for New York, the commission has posted an agenda for its Monday, Nov. 8, 1:30 p.m. meeting, and sports betting license consideration is on the docket. 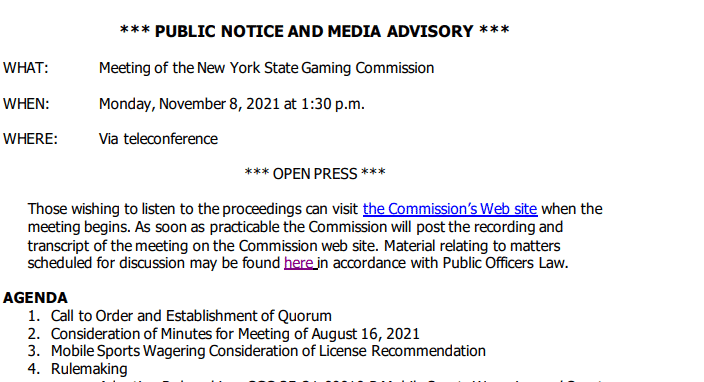 It’s unclear if the sports betting licenses will be awarded at this time.

The New York Post noted online sports betting would likely be up and running by Super Bowl LVI.

According to the report, the New York Gaming Commission has decided to award online sports betting licenses to the group of FanDuel Sportsbook, DraftKings, BetMGM and Bally Bet and a second group of Kambi, Caesars, Wynn Interactive and PointsBet.

Sen. Joseph Addabbo Jr., who has long been one of the most visible and outspoken proponents of online sports betting in the state, did not confirm the Post’s report earlier in the week that a decision had been made. However, he did say the gaming commission has been on schedule for the licensing process.

“In my opinion, the Gaming Commission was on time or slightly ahead of its statutory schedule for mobile sports betting decision making,” Addabbo told Elite Sports New York.

The gaming commission was obligated to name a minimum of two platform providers and four operators for the state’s online sports betting program.

FanDuel, DraftKings, BetMGM and Bally Bet are all listed as platform providers and operators in their bid.

In total, the gaming commission will license eight platform providers and nine operators (assuming all providers and operators in the bids are included) if the Post’s report is true, which would result in a 51% online sports betting tax rate for New York, according to the commission’s final tax rate matrix.

The two groups were selected out of six total groups that submitted bids in August. The Gaming Commission set a deadline of Dec. 6, 2021 to announce the winning sports betting license groups.

Here is what we know about the four bid packages that may not have been selected for a license.

Bet365 is listed as the only operator and provider in the bid. Most of the bid’s information was redacted, but Bet365 touted its customer base of 63 million as a primary driver of its popularity.

The company noted it has marketing agreements with the Yankees, Mets and Jets. It has current signage agreements at Yankees Stadium, CitiField and MetLife Stadium.

The group has no revenue sharing agreements in place with any Native American tribes in the state.

Kambi is listed as the bid’s platform provider, with Fanatics Sportsbook and Penn National Gaming serving as the group’s platform operators.

Penn National Gaming and the Fanatics Sportsbook entered into revenue sharing agreement with the Saint Regis Mohawk Tribe. The agreement includes a 5% revenue share and a minimum guaranteed annual payment of $2.5 million regardless of Penn and Fanatics performance in the New York market.

FOX Bet is listed as the application’s sole provider and operator. The vast majority of information in the bid has been redacted, so very little is publicly known about the company’s plans for New York.

The company lists a partnership with the New York Post as a marketing piece.

theScore is listed as the bid’s primary provider and operator. The company was recently acquired by Penn National Gaming and it’s unknown at this time how the company’s bid will be affected.