The New York Giants are dealing with multiple injuries in the midst of their brutal 1-5 start to the season.

As if the Giants needed additional bad news upon a 1-5 start.

SNY’s Ralph Vacchiano reports the team is placing left tackle Andrew Thomas and wide receiver/return specialist C.J. Board on injured reserve. The latter is expected to miss the rest of the season with a broken arm.

Thomas, however, will be on short-term IR with ankle and foot injuries, which means he’ll need to miss at least the next three games (against the Panthers, Chiefs, and Raiders). After that, the Giants could designate Thomas to return to practice, which would provide them with a 21-day window to officially activate the second-year tackle. Not activating Thomas during that three-week period would lead to him returning to IR for the rest of the season.

Both players exited Sunday’s loss to the Rams with their respective injuries. The right foot issue for Thomas has been lingering though — he didn’t play a snap against the Cowboys in Week 5 despite being active.

The Giants have placed LT Andrew Thomas on injured reserve.

He has a sprained left ankle and an injured right foot. He will now miss at least three games.

Nate Solder and Matt Peart presumably will continue to split the LT/RT duties.

The Giants are also placing WR C.J. Board (broken arm) on injured reserve. His season is most likely over.

In other injury-related news, rookie wideout Kadarius Toney is dealing with an ankle injury that caused him to exit Sunday’s loss early. Toney is not expected to head to IR, but according to Vacchiano, should miss at least one game.

WR Kadarius Toney's ankle injury is expected to keep him out at least one game, according to a source. But for now it doesn't sound like they plan to put him on IR. They believe his absence will be shorter than three games.

As Vacchiano points out, the Giants will likely utilize veteran Nate Solder and second-year man Matthew Peart at the two tackle positions.

Where either resides remains to be seen — both have spent time at the left and right tackle spots this season.

It’s not an ideal situation though, especially when you realize the Giants will be going up against a tough Carolina pass rush this Sunday. Solder is aging and has struggled for much of the last few seasons (with the exception of when he opted out during the 2020 campaign) while Peart hasn’t developed as swiftly as the organization may have hoped.

The Giants will now be missing three of their five Week 1 starting offensive linemen. Guard Shane Lemieux is likely out for the year after undergoing knee surgery while center Nick Gates is certainly done for the season due to a Week 2 leg fracture.

As for the receiving corps that won’t include Board or Toney (the latter for at least the upcoming game), New York will need to see significant production out of Sterling Shepard, and reserve wideouts John Ross, Collin Johnson, and Dante Pettis. It’s unclear when Kenny Golladay (knee) and Darius Slayton (hamstring) will return to the game field.

Fans could also see Jabrill Peppers, Adoree’ Jackson, and/or Darnay Holmes assume the return duties in place of Board. 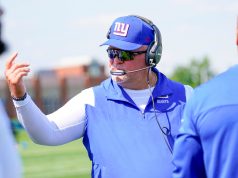 Giants’ Wink Martindale wary of Aaron Rodgers, compares him to a python

Odell Beckham Jr. sure knows how to excite Giants fans

Giants’ Dexter Lawrence steps up vs. Bears in place of Leonard Williams