How different will the Islanders look after making the Eastern Conference Final for the second consecutive year?

The New York Islanders were one of the quietest teams in the NHL throughout most of the offseason. That is, until September came around. General manager Lou Lamoriello made the signings of many players official ahead of training camp.

After making it to the Eastern Conference Final for the second consecutive season, the Islanders are projected to have another strong season. But how different will the team look heading into 2021-22?

The Seattle Kraken got a good one. The Islanders lost their number one RW Jordan Eberle in the expansion draft.

Eberle was tied for third on the team in points with 33, was third in goals with 16, and was fourth in assists with 17. This loss is going to hurt. 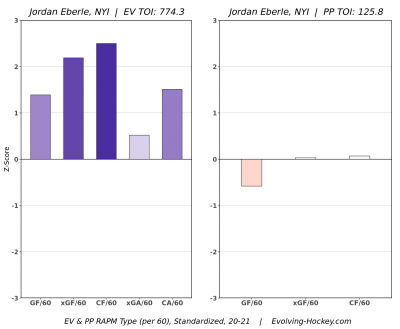 The Islanders are obviously a very deep team, but they weren’t able to replace Eberle with a similar-caliber player this offseason. His absence will be one of, if not the, most intriguing changes to the team.

How will the face of the franchise, Mathew Barzal, fare without Eberle and his elite goalscoring ability as well as alongside Anders Lee, who’s fresh off ACL surgery?

Whoever does end up taking Eberle’s place on that line has big shoes to fill.

After seven years in New York, LHD Nick Leddy was traded to the Detroit Red Wings in July. Leddy was poor in his own zone in 2021, but did put up points.

He led Islanders defenseman in points and was fifth on the team with 31 and led the team in assists with 29. He was phenomenal on the power play, scoring one of his two goals and 10 of his assists on the man-advantage.

Leddy has technically been replaced by Zdeno Chàra who, even at his age, is better defensively than Leddy but nowhere near as impactful offensively.

How significant will Leddy’s departure be for the Islanders, especially on the power play? This makes two high-scoring players that the Islanders parted ways with this offseason.

Last but not least is C Travis Zajac, who announced his retirement from professional hockey in September. Zajac spent his entire career with the New Jersey Devils until he was traded to the Islanders along with W Kyle Palmieri at the deadline.

Because of the depth of the Islanders, Zajac was scratched on multiple occasions and played just 13 regular season games with New York.

However, due to an injury to Oliver Wahlstrom, Zajac was called upon to play an important role in the playoffs and did well. The Islanders trusted him and he succeeded.

Because he didn’t play often in the regular season and because the Islanders are so deep, Zajac’s absence shouldn’t have too grave of an impact on New York.

Back to where it all began. One of the greatest defensemen of his generation and an all-time legend, LHD Zdeno Chára will be returning to the Island for his age-44 season.

He was drafted by the Islanders and made his NHL-debut for them during the 1997-98 season. He spent four years in New York before moving to the Ottawa Senators.

The oldest player in the NHL, Chára is still more than serviceable and brings many valuable attributes to this Islanders team.

His veteran leadership will be important, especially since he will likely be paired with the young Noah Dobson, at least to begin the season, who struggled last year.

Chára scored two goals and 10 points in 55 games last season and was strong defensively. Chára could very well be a defensive upgrade over the newly-departed Leddy and this is a sneaky-good signing for the Islanders.

When the Islanders sent Leddy to Detroit in mid-July, they received a 2021 second-round pick and RW Richard Pánik in return. Pánik will not be a regular starter for the incredibly deep Islanders barring an injury, but he’s a fantastic depth option.

The 30-year-old Pánik is a seasoned veteran with an impressive 517 NHL games under his belt. He has 88 goals and 194 points over that span.

His 2020-21 season, which he spent with the Washington Capitals and Red Wings, was one of his worst offensively, but surprisingly one of his best defensive efforts.

Pánik will easily be one of the best depth forwards in the NHL and has the potential to be impactful immediately when called upon.

The third and final addition, LW Zach Parise will be a huge upgrade in the Islanders’ bottom-six. Throughout his career, Parise has been a poor defensive forward, but an elite goal-scorer.

He scored just seven goals and 18 points last season, making it one of the worst campaigns of his career, but he he was still impactful in the offensive zone and did drive play.

Parise is entering his age-37 season, but last season can be considered an anomaly and there’s a good chance that he rebounds, at least somewhat.

Parise will likely feature on the third line and should do very well alongside Jean-Gabriel Pageau and Oliver Wahlstrom.