After 15 great years, Travis Zajac is hanging up his skates.

On Monday, veteran center Travis Zajac signed a one-day contract with the New Jersey Devils so he could retire in the jersey he proudly represented for almost 15 years.

Zajac, 36, was originally the 20th overall selection in the 2004 NHL Draft by New Jersey. He served as an assistant captain in seven of his last eight seasons with New Jersey.

He appeared in his 1,000th career NHL game on February 21, 2021, at Washington, becoming the fourth player in franchise history to reach the milestone.

He appeared in all but 13 games of his career in a Devils’ sweater; he was traded to the Islanders at the deadline this past season with Kyle Palmieri.

Zajac is one of the best forwards to ever wear the Devils’ crest on his chest. Here’s where he ranks in franchise history: 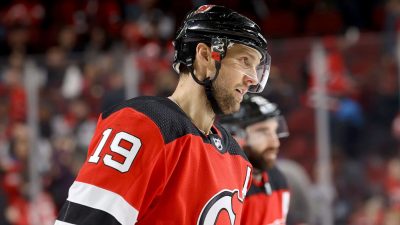 “As a kid playing hockey on the outdoor rinks in Winnipeg, I dreamt about playing in the NHL. Growing up the oldest of four boys, it was the perfect hockey environment. Thanks to my parents unwavering support in our lives, that dream became a reality. Then, I got to live that childhood goal for 15 years with the Devils.

“I want to thank the New Jersey Devils organization for giving me the opportunity to play in the best league in the world. To the past and present ownership, managing partners, managers, coaches, and trainers, your hard work has not gone unnoticed- thank you. And thanks also to my agent, Kurt Overhardt, for always believing in me.

“I have to acknowledge all my teammates who helped me throughout my career. I will cherish all the memories made and I hope that I’ve impacted your life the way you’ve positively impacted mine.

“Now, to the fans, you are the reason this game is so special, and I leave the game knowing I enjoyed every moment I got to play in front of you.

“Lastly, I want to thank my beautiful wife Nicole and our kids Zenon, Veronika, and Anya. We have deep roots in New Jersey now. My wife went to graduate school at Montclair State, our three children, were born in Jersey and raised right here in this rink at Prudential Center. They know no other home and no other community like the Devils. It’s now time for me to embed myself into this same community where I grew into adulthood. It is where my heart is, my home, and I’ve never felt otherwise.

“Born in Winnipeg, Made in Jersey.“