How big of a blow will Jordan Eberle’s departure to the Seattle Kraken be to the Islanders?

The 2021 NHL expansion draft is upon us, and the Seattle Kraken have taken RW Jordan Eberle from the New York Islanders.

Time to get Kraken! pic.twitter.com/5oYxgRmJG7

The fact that the Islanders exposed Eberle in the first place was a confusing move to most, especially when they decided to protect guys like Matt Martin and Cal Clutterbuck. He’s the team’s number one RW and one of their most important players.

Eberle was outstanding all season-long at both ends of the ice and his absence surely has the potential to be glaring next season. 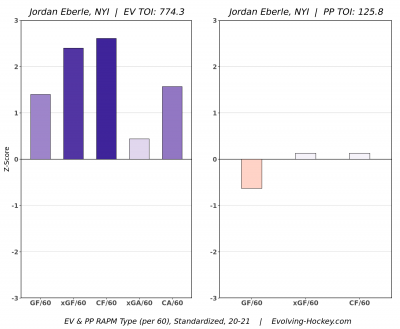 The Islanders likely exposed him because of his five-year, $27.5 million contract, the fact that he’s 31 and, most importantly, because they feel like he can replace him.

Eberle has been a key part of the this Islanders’ team and it’s difficult to believe that New York won’t go out and get another solid number one RW to complement Anders Lee and Mathew Barzal on that top line, one who could be even better than Eberle.

If they don’t do that, however, then it’s pretty safe to say that the Islanders made a grave mistake.