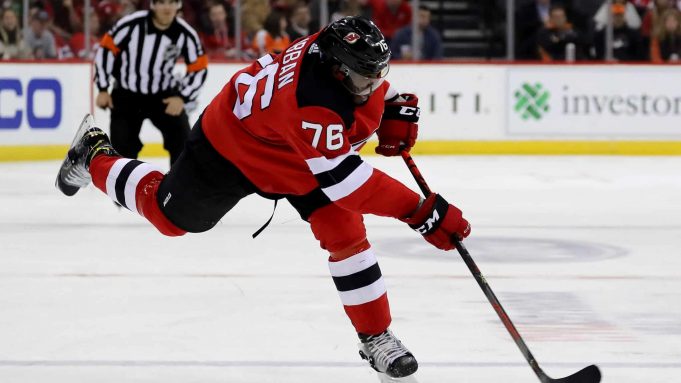 The former Norris Trophy winner has one year left on his contract.

With the NHL’s Expansion Draft coming on Wednesday night, rosters have been frozen since the weekend. But that doesn’t mean teams have stopped talking trade.

The New Jersey Devils could be a busy team with multiple picks in the first round of the 2021 NHL Draft and some intriguing young players to build around. But one veteran appears to be readily available: PK Subban.

PK Subban on the move again? #NJdevils looking for a taker for the former Norris winner. One more year left on contract. Heavy cap hit.

He signed an eight-year, $72 million deal ($9 million AAV) before the 2014-15 season with the Habs and has been traded twice during the contract.

The Canadiens traded Subban to Nashville for Shea Weber in the summer of 2016 and the Preds dealt him to the Devils three years later for a package of for Steven Santini, Jeremy Davies, a second-round pick in the 2019 draft (Bobby Brink) and a second-round 2 in the 2020 draft (Marat Khusnutdinov).

The Devils did not protect Subban in advance of the upcoming expansion draft, which takes place on Wednesday evening.

Because of the pandemic, the NHL’s salary cap is remaining at $81.5 million for the 2021-22 season, which makes dealing Subban’s $9 million cap hit a tough situation. New Jersey will likely need to sweeten the pot by either including a good pick/prospect or retain salary; they may need to do both.

The Islanders needed to include three draft picks to unload Andrew Ladd’s contract before the roster freeze.

Subban was originally drafted by the Montreal Canadiens in the second round (No. 43 overall) in the 2007 NHL Draft.