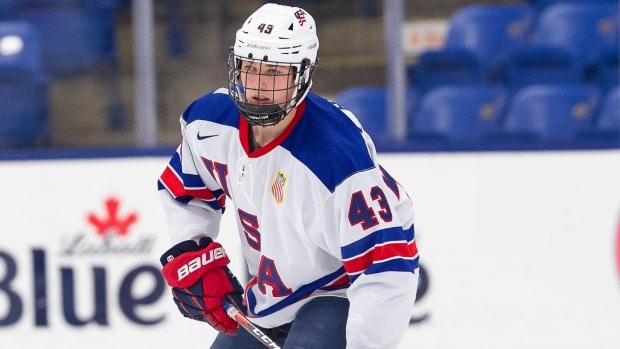 On Wednesday night we found out, officially, the order of selections in the top half of the first round of the 2021 NHL Draft. The Seattle Kraken moved up from third to second in the lottery, meaning the New Jersey Devils own the fourth overall selection.

Which is what we expected.

So who might the Devils select when they’re on the clock? Let’s look at a few names recent mock drafts have targeted for the Devils.

Comments: “By sticking at No. 4, the Devils are guaranteed to land one of the top four defensemen in this class. That is an obvious area of need. Does that mean the best player on their board will be a defenseman when it’s their turn? In this scenario, they’d still have three of the big four left to choose from. The youngest of the three Hughes brothers is an obvious connection given that older brother Jack is one of two franchise players in the organization. This isn’t strictly a nepotism pick, though. Luke is bigger than Jack (and Quinn), skates incredibly well and could absolutely blossom into the top-pairing defenseman the Devils desperately need in the coming years.”

Comments: “An excellent skater who has a ton of confidence with the puck on his stick. The brother act will add intrigue and interest for the fan base.”

Comments: “After making three picks in the first round last year, and owning the Islanders pick as well as this one, and factoring in the overall depth of their system, the Devils can afford to swing for the fences. I used to be among those analysts who would swear a blue streak at the thought of drafting a goalie in the first round. I still reflexively cringe at the idea, but I have come to believe that NHL teams are doing better in scouting netminders, and in developing them. New Jersey’s incumbent starter, Mackenzie Blackwood, is still pretty young, and talented, but he has yet to prove that he is more than average in the net, or capable of dragging a subpar team to postseason glory on his own. Wallstedt, helped by elite play reading capability, and a mature overall game in terms of both composure and technique, looks like he will be that type. It’s risky, but this is the time to take that risk. If not Wallstedt, I could see the other players listed in the maybes above, as well as Chaz Lucius as possibilities.”