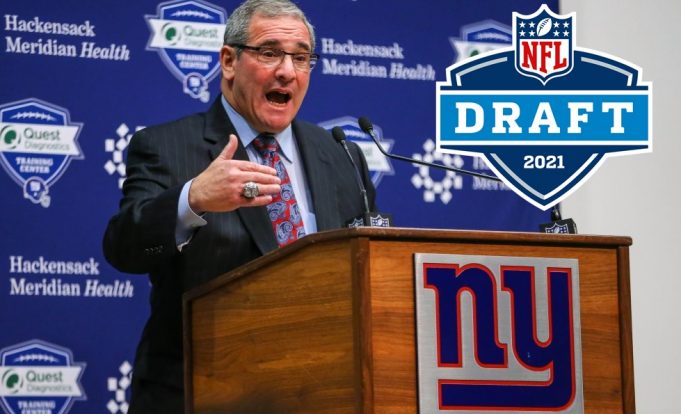 Which positions of need should the New York Giants focus on and who could they target with the 2021 NFL Draft rapidly approaching?

The Giants employ far from a perfect roster — but it’s unfair to say the current slate of players isn’t better than it was 2-3 years ago (SEE: the “miscalculations in 2018” co-owner John Mara brought up in January’s end-of-season press conference).

A secondary that included Antoine Bethea, Janoris Jenkins, and DeAndre Baker has become one that encompasses James Bradberry, Logan Ryan, and Adoree’ Jackson.

Blake Martinez is “head and shoulders” an upgrade from Alec Ogletree; Kenny Golladay will truly fill the role of a No. 1 receiver; Leonard Williams is playing the best football of his life and set to be back for at least three more years via his new contract extension.

The roster is on the right track, but again, isn’t clear of faults. The Giants still need to address a number of positions in the upcoming 2021 NFL Draft, regardless of the roles the draftees fill.

So what are the positions of need? When in the draft can the Giants focus on those spots? Who are the potential targets?

ESNY has the answers.

Potential Targets (First Round if Trade Back)

The Giants could go any route when it comes to the wide receiver position. Despite the fact they signed a new No. 1 wideout in Kenny Golladay, they could still acquire another talented body like Jaylen Waddle or DeVonta Smith in the first round to add to Daniel Jones’ slate of targets.

If they don’t draft one at No. 11, they could wait until the third round to draft a reserve wideout, or if they do draft a Waddle or a Smith, they could still continue to add to the position group with their No. 197 or 202 overall selections in the sixth round.

Some people may not agree, but a beneficial move could be to trade back from the No. 11 pick and end up in the back half of the first round. They could acquire a few additional selections out of the deal (such as a second-rounder and possibly a fourth-rounder) and still draft someone like Kadarius Toney out of Florida or Elijah Moore out of Ole Miss, either of whom would provide pure speed to Jason Garrett’s passing attack.

If the Giants end up taking an edge rusher in this draft, expect them to do so in one of the first three rounds.

While many believe they could acquire one in the opening round, they may not need to. Defensive coordinator Patrick Graham’s situational schemes won’t require a first-round-caliber star but instead a reliable individual who could fill a specific role. This is especially the case considering the defensive unit already employs a star pass rusher in Leonard Williams.

Waiting to take someone like Quincy Roche out of Miami or Carlos Basham Jr. out of Wake Forest may benefit the roster in the best way possible. Given the latter’s on-field versatility, the Demon Deacon could be a target that attracts both Graham and head coach Joe Judge.

Oregon’s Penei Sewell is the top offensive tackle prospect in this year’s draft class, but it’s very unlikely he drops to the Giants at No. 11. Many are mocking him to the Cincinnati Bengals at No. 5 and it’d essentially be a miracle if he dropped out of the top 10.

The others (aka the ones listed above) could all be available at No. 11 though — if Rashawn Slater out of Northwestern is, there’s a decent chance they’ll all be.

While Slater is possibly the most talented out of the aforementioned individuals, USC’s Alijah Vera-Tucker is extremely versatile and could provide the Giants with talent at both the guard and tackle positions — the organization may need to find an answer for either spot amid the uncertainties surrounding tackles Nate Solder and Matt Peart as well as guard Will Hernandez.

Both Brady Christensen (BYU) and James Hudson (Cincinnati) would initially be reserve swing tackles in hopes of becoming long-term starters sometime down the road.

Regardless, addressing the offensive line could make sense. Developing Daniel Jones should be one of the team’s top focal points in 2021 and improving the group of “hog mollies” would assist with that crucial goal.

Blake Martinez is a star, that’s for certain. He’s a tackling machine who racked up 151 combined last season (third in the NFL).

That other inside linebacker spot, however, may not possess a long-term answer. Is 2020 Mr. Irrelevant Tae Crowder the solution? What about Devante Downs?

If the Giants aren’t overly confident in anyone currently on the roster, they could utilize their prestigious No. 11 pick on either Penn State’s Micah Parsons or Notre Dame’s Jeremiah Owusu-Koramoah (should one or both be available). Many favor the former, but in my mind, the latter is an absolute playmaker and more versatile, which could lead to him fitting into Graham’s schemes.

If they pass on an inside linebacker in the first round, there’s a chance the Giants could go edge rusher in the second and then either receiver or interior offensive lineman in the third, which would then potentially lead to Dave Gettleman’s front office revisiting this position group in the fourth.

Isaiah McDuffie was extremely productive for Boston College and recorded 107 total tackles in 11 games this past season. Pete Werner, on the other hand, racked up 54 combined tackles for Ohio State en route to a 2020 first-team All-Big Ten selection.

Make sure to check the ESNY Film Room
for analysis of top 2021 NFL Draft targets
for the New York Giants!

The Giants most definitely won’t be targeting an interior offensive lineman at No. 11 in the opening round (unless, of course, they draft Alijah Vera-Tucker and eventually utilize him as a guard).

During the second round, the Giants could target an edge rusher, so the potential drafting of a concrete interior O-lineman may need to wait until the third (if they’re looking to acquire an eventual long-term starter) or the sixth (if they only wish to grab a depth piece for the position group).

So why might New York need one as early as the third round?

While Shane Lemieux is expected to retain his role as one of the two starting guards and the same goes for Nick Gates at center, it’s unclear if the organization is notably high on Will Hernandez after a number of on-field struggles the past two seasons. It’s additionally unknown if free-agent pickup Zach Fulton will be the type of every-game starter he was in Houston last season.

A reliable depth piece is at least needed, which is why the Giants could sway more towards the sixth round for this position in comparison to the third.

Initially, cornerback could’ve been the top position of need for the Giants. But last month, the organization inked Adoree’ Jackson to a three-year deal and he’ll certainly take on a starting role opposite 2020 Pro Bowler James Bradberry.

Other than that, the Giants secondary is pretty deep as a whole. Logan Ryan and Jabrill Peppers make up one of the more athletic and versatile safety tandems in the NFL while Julian Love and Xavier McKinney are talented situational defensive backs. Slot corner Darnay Holmes additionally carries great potential in this league.

Thus, if the Giants are going to address the defensive backfield, it would be for depth purposes with one of their final three draft picks (No. 117 in the fourth, No. 197 in the sixth, or No. 202 in the sixth).

Camryn Bynum out of Cal is a physical corner but one whose coverage skills are a bit shaky. The same goes for Ohio State’s Shaun Wade, so either would be best utilized in the slot.

LSU’s Kary Vincent Jr. can perform as both a corner and safety, so that level of versatility could intrigue the coaching staff. Vincent recorded 47 total tackles, four picks, and eight pass breakups for the Tigers in 2019 prior to not playing this past season.