Nico Hischier becomes the youngest captain in the NHL.

Hischier becomes the youngest current captain in the NHL and the second youngest player to be named a captain in the history of the Devils’ franchise; Kirk Muller was 21 years, 243 days old when he was given the “C.”

New Jersey selected Hischier with the number one overall pick at the 2017 NHL Draft, making him the first (and still only) Swiss-born player to be selected first. He joins Nashville’s Roman Josi as the second current Swiss-born captain in the NHL.

Among all players from the 2017 NHL Draft, Hischier ranks first in NHL games played (209) and second in goals (51), assists (84) and points (135), trailing only Vancouver’s Elias Pettersson, the fifth overall pick, in all three offensive categories.

Last season, Hischier scored 14 goals with 22 assists in 58 games for the Devils. He will make his 2021 season debut wearing the “C” on Saturday afternoon against Buffalo. He was absent from the team’s first 11 games because of a leg injury.

Hischier enjoyed a stellar junior career in Canada. He was named CHL and QMJHL Rookie of the Year, QMJHL Offensive Rookie of the Year, a member of the QMJHL All-Rookie Team, and was awarded with the Mike Bossy Trophy as the QMJHL’s Best Professional Prospect. Decent hardware for a teenager! 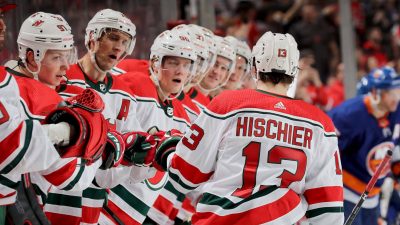 Hischier is the 12th captain in the history of the Devils, joining this historic list: