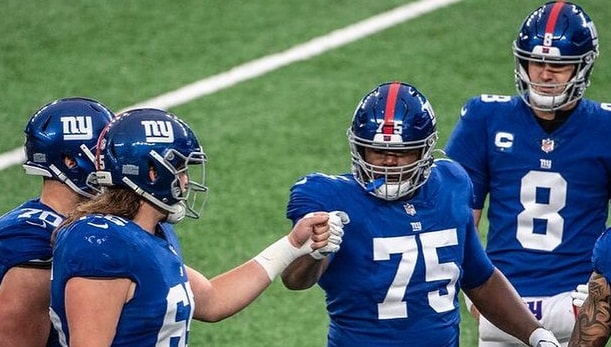 Veteran offensive tackle Cameron Fleming, who played for the Giants on a one-year deal in 2020, is set to become a free agent.

New York Giants offensive tackle Cameron Fleming finds himself smack dab in the middle of a group of pending free agents. Contrary to the belief of some fans, bringing him back could actually be a benefit to the overall offensive unit despite the fact he would potentially reside in a reserve role.

The veteran signed a one-year, $3.5 million deal with the Giants last offseason, which means Big Blue will need to decide whether to retain him for the 2021 campaign and possibly beyond.

With Andrew Thomas having made improvements over the course of his 2020 rookie season and veteran tackle Nate Solder possibly returning in 2021 after opting out of this past campaign due to COVID-19 concerns, Fleming would likely come off the bench.

However, keeping Fleming as a reserve wouldn’t be damaging for Jason Garrett’s offense whatsoever.

Cam started 16 games in his inaugural season with New York and has started 42 total games over seven years. The Giants would be lucky to employ a reserve tackle who possesses that level of experience; they can’t put themselves in a short-handed position if either Thomas or Solder goes down due to injury.

The issue with this entire situation, however, is that it’s unclear if the Giants and Fleming will come to a legitimate agreement.

Fleming might request an average annual salary higher than $3.5 million. He and his agent may take the fact that he started every game this past year and how he was a veteran leader on a mostly young offensive line and use that as leverage to land a higher salary for his upcoming contract.

Nonetheless, the Giants may not want to make him more expensive given his pending role if Solder returns. They likely won’t want to have paid him a certain amount for 2020 and then pay him even more to contribute less the following year.

Every ounce of salary cap space will count, especially during a pandemic-impacted offseason and time period in which the Giants need to re-sign other players such as Leonard Williams and Dalvin Tomlinson.

The organization could also refrain from increasing his average annual salary due to his 2020 on-field mistakes. Fleming allowed six sacks (tied for seventh-most among offensive tackles) and committed seven penalties (tied for ninth-most among tackles).

His 58.4 Pro Football Focus grade wasn’t overly intriguing either and was the second-worst among the five starting offensive linemen the Giants employed by the conclusion of the year (Fleming, Thomas, Shane Lemieux, Nick Gates, and Kevin Zeitler).

Fleming may additionally desire the opportunity to compete for a starting job, and he might not acquire that chance in East Rutherford if Thomas and Solder are present on the active roster.

He’d be a decent backup, and that’s what the Giants will require heading into 2021 if Solder returns following his appropriate hiatus. Fleming will just need to realize that that would likely be his role and also understand the pay would probably be around the same amount as 2020.