The Hall of Fame New York Giant and current television host has been quarantining due to the positive coronavirus test.

Michael Strahan has tested positive for COVID-19. TMZ reported the news Wednesday after learning of the positive test from sources tied to him.

The Hall of Fame New York Giants defensive end hasn’t been hosting on Good Morning America this week and was additionally hosting FOX NFL Sunday from a remote setting for the NFC Championship Game this past weekend.

TMZ reports that on Saturday, he was made aware that he was exposed to the virus last week and is going to address the current situation on Good Morning America from a remote location on Thursday.

Given that the only football game remaining — Super Bowl 55 — will be held on CBS, there is no more FOX NFL Sunday for the remainder of this current season.

Strahan’s recent remote stint for FOX NFL Sunday was certainly not the first time the show needed to have one of its hosts fulfill their duties outside of the main studio throughout the pandemic-impacted season. Broadcaster and Hall of Fame Cowboys head coach Jimmy Johnson worked the televised event remotely this entire year.

It’s unclear how long Strahan will quarantine for but it has been revealed he isn’t experiencing major symptoms. TMZ additionally reports that his daughters were in contact with Strahan after he had been exposed to the lingering virus. Thus, the two girls as well as their mother, Jean, will be receiving COVID-19 tests. 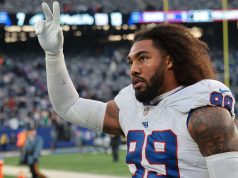