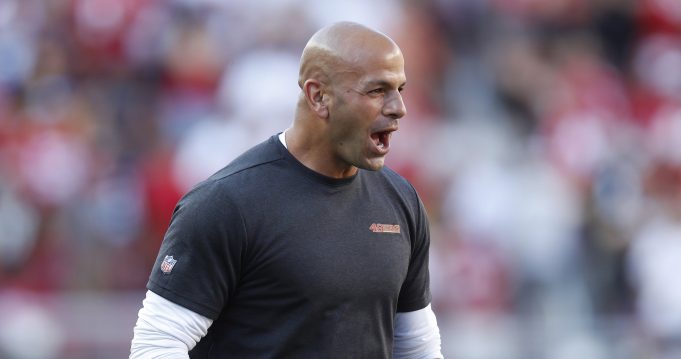 There’s a new leader of the New York Jets coaching staff, and it’s someone who’s expected to bring a high level of energy and intensity to Florham Park. On Thursday, the organization announced the hire of Robert Saleh, who was previously the San Francisco 49ers defensive coordinator.

The move, which is to create new beginnings for an organization that hasn’t reached the postseason since the 2010 campaign, was met with much praise, including from two of Saleh’s former co-workers in San Fran.

Here's what Kyle Shanahan and John Lynch had to say about Robert Saleh's hiring to be the head coach of the Jets: pic.twitter.com/LrWtNShPSk

“There is not much I haven’t already said about Robert’s abilities as a coach and as a leader,” Shanahan said. “As a friend, I respect him greatly and could not be happier for him, [wife] Sanaa and their family. Robert helped to build a successful environment that has developed both players and coaches, and we are thankful for everything he brought to the 49ers these last four years. We wish him all the best.”

“Robert is a great coach and an even better person,” Lynch stated. “He’s a gifted leader who has earned the opportunity to direct a team in this League. His contributions to the 49ers over the last four years have helped us establish a culture and a standard that will continue to serve us well. We wish Robert, Sanaa and their entire family the best, and look forward to watching his future accomplishments.”

It’s a satisfying hire for a number of reasons. For one, this Jets team needed some sort of urgency in and around the building, an attribute Adam Gase didn’t portray during his two-year stint with the organization. The defensive unit certainly needed assistance as well. In 2020, the Jets were 24th in total yards allowed while Saleh’s 49ers were fifth.

The new coaching staff should additionally be beneficial for quarterback Sam Darnold, if he’s to remain with the team. Saleh is expected to hire 49ers passing game coordinator Mike LaFleur to be Gang Green’s new offensive coordinator. LaFleur’s 49ers passing attack was 12th in the NFL this past season in yards per game with the below-average Nick Mullens and C.J. Beathard along with the inconsistent Jimmy Garoppolo as quarterbacks.

While still carrying potential, Darnold hasn’t met expectations just yet, and the excepted new offensive system should potentially provide him with a great opportunity to succeed.