“Mr. Smile” stole the show, but don’t sleep on the impact “Cookie” will have on the rest of the Mets’ pitching staff.

On Thursday, the New York Mets acquired superstar shortstop Francisco Lindor and starting pitcher Carlos Carrasco from the Cleveland Indians in the biggest trade of what has been a quiet offseason.

Arguably the best shortstop in the game, Lindor headlined the trade. However, Carrasco’s impact on the Mets’ starting rotation – and the trickle-down impact on the bullpen – is going to be invaluable.

In fact, the addition of Carrasco to the Mets’ pitching staff elevates them into the conversation regarding the best rotations in baseball. 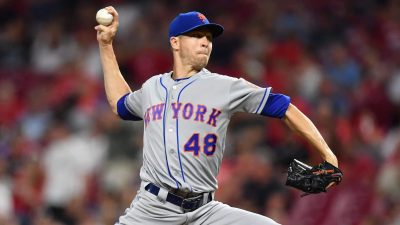 The Mets starting rotation is will likely look something like this to start the 2021 season:

There isn’t much that needs to be said about Jacob deGrom. He fell short of capturing his third consecutive Cy Young Award in 2020, but many still consider him to be the best pitcher on the planet.

One of the faces of the Mets, deGrom will be highlighting this strong rotation.

After missing the beginning of the 2020 season with a torn left calf muscle, Marcus Stroman opted out of the remainder of the season shortly before he was expected to make his return.

That was expected by many to mark the end of Stroman’s tenure in Flushing but after Steve Cohen purchased the team, Stroman accepted the $18.9 million qualifying offer that the team extended to him.

When Stroman was traded to the Mets in July 2019, he had been having a fantastic season with the Toronto Blue Jays and was named to the All-Star Game for the first time in his career.

He wasn’t as effective in the 11 starts he made with the Mets that season, but was able to get on somewhat of a roll to end the year.

Because Stroman hasn’t featured in an MLB game in quite some time, he might get off to a slow start but will surely be expected to gain enough momentum to become the team’s bona fide number two.

Up next is the man of the hour, Carlos Carrasco. Carrasco, who’s fondly referred to as “Cookie”, will be 34 years old when the 2021 season begins and has had a very solid career.

Carrasco was signed by the Philadelphia Phillies as an undrafted free agent in 2003, but was traded to the Indians in 2009, before he had played in an MLB game.

In 2019, Carrasco was diagnosed with leukemia but was able to come back strong and was even named the 2019 AL Comeback Player of the Year. Carrasco had a very solid 2020 season, and Mets fans should be excited to have him join the team’s rotation.

The experienced veteran should prove to be an excellent, middle of the rotation option for the Mets.

David Peterson should assume the role of the Mets’ number four starter. The 25-year-old was very impressive in his rookie season and has certainly earned a regular spot in the team’s starting rotation.

The only reason we’re discussing Steven Matz as a rotational piece is because Noah Syndergaard, who is still recovering from Tommy John surgery, isn’t expected to make his season debut until June.

Seth Lugo would have been an option here, as well, but MLB Network’s Jon Heyman has reported that the Mets intend to use Lugo out of the bullpen this season.

The Mets haven’t said so publicly, but the belief and expectation is that Seth Lugo will move back to the bullpen where he dominated. Lugo in fact was one of the better bullpen arms in baseball before joining the rotation.

Last season was expected to be an important one from Matz, but unfortunately, it ended up being disastrous.

Matz was so bad that he was eventually moved to the bullpen, where he will almost certainly be used after Syndergaard returns, barring a shockingly great stretch of starts.

Matz is somewhat of an x-factor in that if, by some miracle, he comes out of the gate hot, there might not be a rotation in the league better than New York’s.

Syndergaard, who most recently served as the Mets’ number two option behind deGrom, likely won’t be as effective upon re-joining the team after missing so much time in recovery.

In fact, it’ll be difficult for him to re-gain his job as the team’s number two starter this season. Even so, Syndergaard has had a successful career in Flushing, where he’s spent his entire five-year career.

Lindor joining the Mets will make the team better, both at the plate and in the field, but Carrasco has made this pitching staff one of the very best in the game. This is a dangerous rotation that everyone in the league should fear.