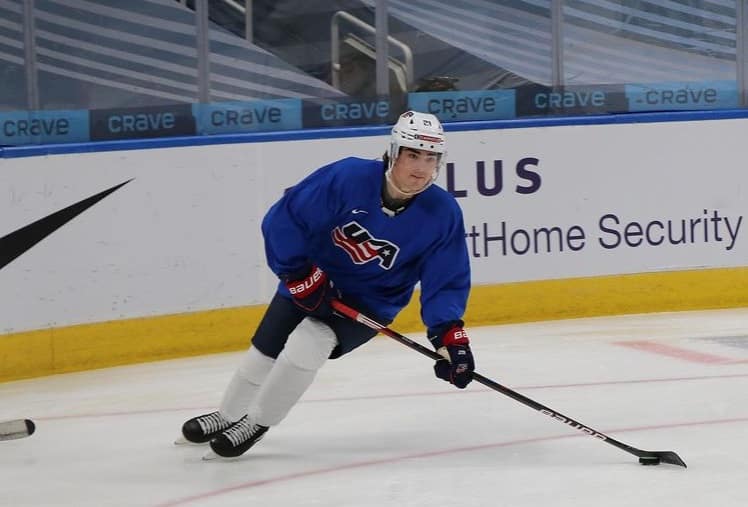 In this third and final recap of the 2021 World Junior Championships covering prospects of the Rangers, Islanders and Devils, let’s take a look at how the future Blue Shirts did.

The New York Rangers organization was represented by four players in the World Junior Hockey Championship. Three of the four were selected in the 2020 NHL Draft.

Brett Berard was quite possibly one of the most fun and entertaining American players to watch in the WJC and Rangers fans have to be excited by what they saw from him.

At 5’9”, 163 lbs., Berard is quite small, but the kid sure is feisty. Berard’s skating ability was one of the things that drew the Rangers to him at the draft, and he showed it off at the World Juniors.

He’s a workhorse that’s full of energy, something we saw from him every time he stepped onto the ice. Berard played in seven games for Team USA and recorded five points (one goal, four assists). Let’s take a closer look at how Berard played.

Berard’s first point of the game was a secondary assist on USA’s third goal of the game.

The assist itself was nothing to write home about, but Berard’s hustle and quickness were evident in how he rushed down the ice and was able to position himself in front of the net in the event he would need to get the rebound.

Berard went on to score USA’s eighth goal, and he didn’t look like a fifth-round pick on this play.

He received the puck from his teammate, John Farinacci, in their own zone, and was immediately off to the races, just blowing past any and every Austrian skater that came in his way.

Berard’s last contribution of the game came in the form of a secondary assist on USA’s final goal. He did a great job of maintaining possession of the puck and then intelligently dropping it off to his teammate, Brock Faber.

Berard was able to get a secondary assist on the first goal of USA’s 4-0 win against Sweden.

Berard’s final point, a secondary assist, of the tournament came in the quarterfinals against Slovakia on USA’s second goal.

He took a shot that went wide but hustled to get to the puck and made a nice pass to Ryan Johnson while under immense pressure along the boards.

Berard had an incredibly solid tournament, and the fact that he was a fifth-round pick makes it even more impressive. He bears a striking resemblance to Mats Zuccarello, both in size and play style, something that must make Rangers fans smile.

The 18-year-old will be eligible to participate in the tournament again next year, and it’ll be interest to see how different his game is by then.

At this rate, there should be no reason why Berard doesn’t make the NHL, and that goal might not be too far away.

Dylan Garand played in just one game for Canada so not much can be said about him. He manned Canada’s net in the third period of their 16-2 blowout of Germany, conceding just one goal on the power play with just a few seconds left in the game.

Garand faced just five shots, four coming on Germany’s late power play. He made a good save that unfortunately rebounded for Florian Elias to put in the back of the net.

Garand, like Berard, is 18 years old and will likely be back for Canada next year in a bigger role. Garand’s journey to the NHL is a long one, but he has all the makings of a good goaltender with a great deal of potential.

We’ll certainly learn more about the netminder at next year’s tournament.

Believing the New Jersey Devils would grab Braden Schneider at 20, the Rangers traded up to take the giant defenseman with the 19th pick.

The move came as a surprise because the Rangers had several other needs to address, but everything about Schneider’s game made him attractive. After the WJC, the Rangers organization should still feel good about this pick.

Schneider did serve a one-game suspension for an illegal hit to the head on Germany’s Jan-Luca Schumacher, but his play after the suspension as well as his overall performance throughout the tournament were solid.

Schneider scored three points (a goal and two assists) in six games, showing that he deserves to be called an offensive defenseman.

He produced, but his defense was also very respectable.

Really good anecdotal test here for Braden Schneider. Rodion Amirov is one of the quickest, most elusive prospects in the world. Defends this rush exceptionally well. pic.twitter.com/hqq6XL4Icg

Schneider was one of Canada’s standout players and might not actually need three to four years to make it to the NHL if he keeps us this excellent play. He’s grown into his frame and both offense and defense are strengths for him.

Like Garand, there isn’t much to be said about Hunter Skinner because he barely played. The big 19-year-old defenseman played just one shift in the entire tournament.

Skinner, who won’t be eligible for next year’s tournament, is still worth paying attention to as he works to earn an entry-level contract.

Neither Garand nor Skinner played nearly enough to earn judgment from the viewers, but Berard and Schneider should be enough for the Rangers organization and fanbase.

Berard looked phenomenal, especially for a fifth-round pick, and Schneider provided another indication that he was worth trading up for.

The future’s bright in Manhattan.