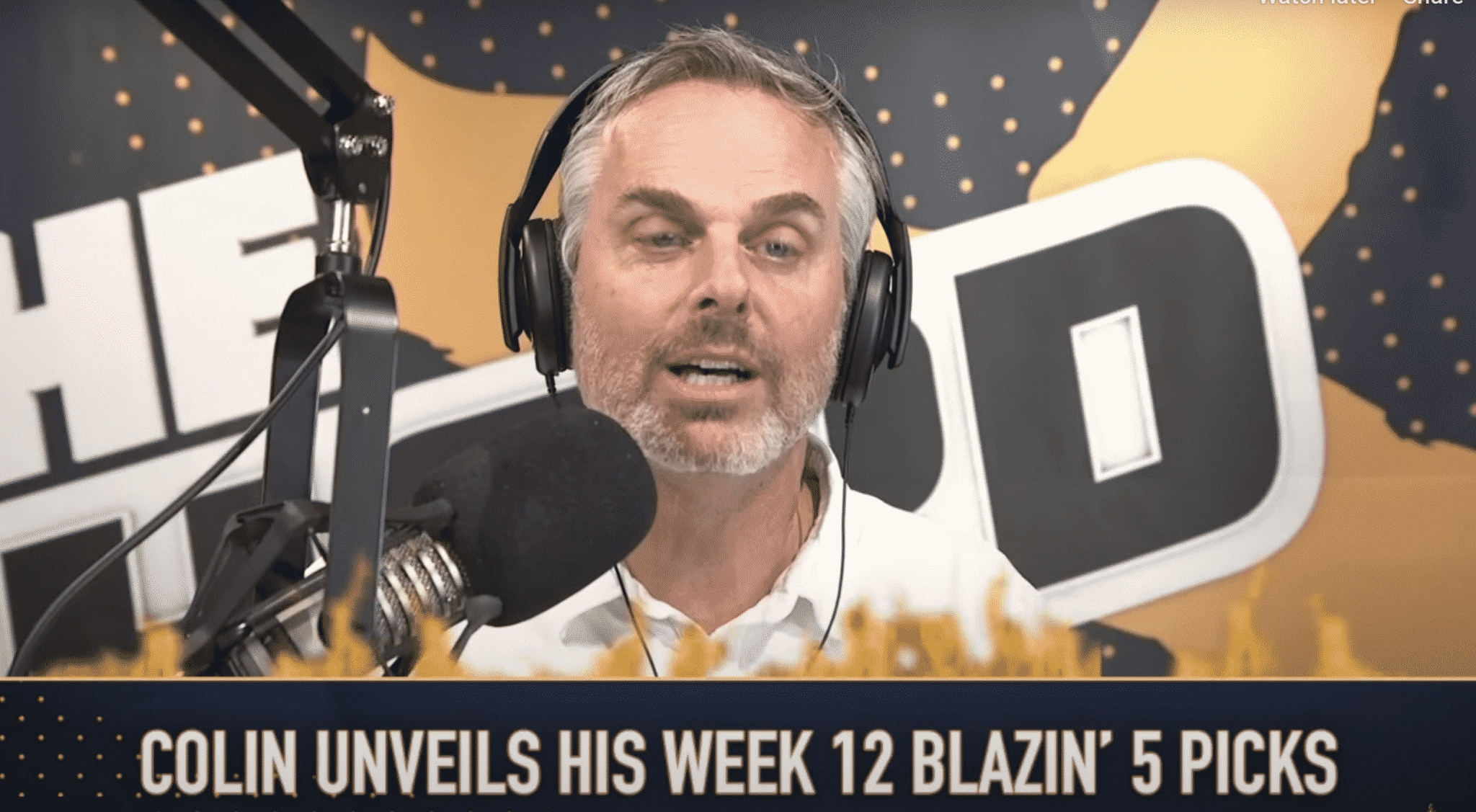 Colin Cowherd has released his “Blazing 5 Picks” ahead of a packed Week 12 slate of NFL games.

Colin Cowherd has made his picks and predictions for NFL Week 12 action. These are his against the spread picks.

Colin admits right off the bat that he would typically take the Chargers +6 in just about any other set of circumstances, but opted instead to take the Bills -6, because he believes Buffalo has something to play for, while the Chargers do not.

Buffalo is fighting for a potential home playoff game and a shot at the AFC East crown. The Bills entered the bye week 3-1 in their last four games and look poised to come out rested and ready to meet the challenge. Their only three losses have come at the hands of the 7-3 Titans, 9-1 Chiefs, and 6-4 Cardinals.

While the Bills’ defense hasn’t been great, they’ve forced nine 4th quarter turnovers this season (best in the league) and ten turnovers total in their past five games.

Colin doesn’t like the Giants in this one, he loves the Giants. New York has one thing going for them that Cowherd consistently uses when choosing his Blazin’ 5 Picks: they’re coming off a bye.

New York is 4-0 against the spread since Week 7 and have scored at least 20 points in seven straight games. QB Daniel Jones hasn’t turned the ball over in either in back-to-back games and has posted a passer rating of at least 90 over that period.

The Bengals lost star rookie QB Joe Burrow for the season with a torn ACL and will look to Ryan Finley and his career 62.1 passer rating to get the job done. Colin’s not a believer.

Colin’s third pick of the week is another one he loves. While the Colts are coming off a win over an immensely popular Packers squad, Cowherd believes the line is overvalued.

Tennessee is 3-1 on the road this season and 6-1 on the road in regular season games dating back to last season. They’ve turned the ball over a mere five times on the season. Colin believes that good coaching and a good running game are key to winning on the road and the Titans have both. Running back Derrick Henry has rushed for 100+ yards in seven straight road games.

As much as Colin loves his second and third picks, this one isn’t the most confident play, but he believes it’s the right one.

While he thinks the Bears have a pathetic offense, their defense has allowed just 12 passing touchdowns on the year (second-fewest in the NFL). Chicago’s defense has been lethal on third down, allowing the lowest conversion percentage in the league. No opposing quarterback has amassed 300+ yards against the Bears’ defense this season.

Green Bay has a few red flags. The Packers have the NFL’s worst redzone defense and Aaron Jones has rushed for a paltry average of 50 yards per game since Week 3.

Prediction: Green Bay by a touchdown

Colin’s final pick of the week involves the Eagles, which has been a bit of a roller coaster for him this season. While the Seahawks are not coming off a bye, they did have the benefit of last playing on the previous Thursday, which gives them extra practice time and a longer period to adjust to cross-country travel.

Seattle’s pass rush had been mediocre for a large portion of this season, two players have made a huge impact in recent weeks. Carlos Dunlap’s acquisition and the return of Jamal Adams has led to the Seahawks’ defense leading the league in sacks since Week 9.

Carson Wentz is 0-4 against the Seahawks in his career and lost his right tackle Lane Johnson for the season with an ankle injury. Cowherd believes Seattle will continue to ride an East Coast hot streak, having won ten of their past eleven games when traveling across the country.