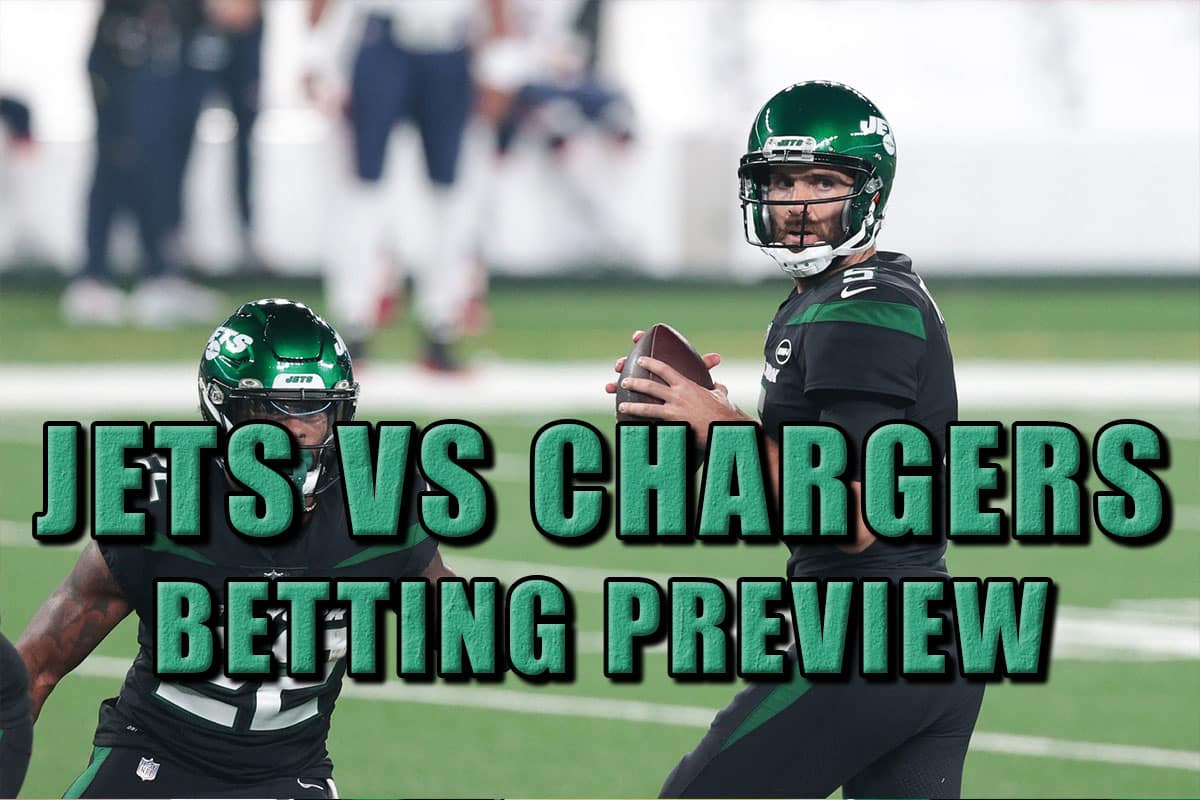 Coming out of the bye week, the Jets will face the Chargers in a Week 11 battle at the beautiful SoFi Stadium in Inglewood, California. This game could go either way, so let’s take a look at the odds and provide our picks and predictions.

Sam Darnold will be missing his second straight game due to a shoulder injury, but veteran backup Joe Flacco did impress against the Patriots in Week 9, which makes this matchup even more interesting.

The Jets are currently 9.5-point road underdogs and +360 on the moneyline in comparison to the Chargers’ -435. The total is set at over-under 46.0.

Both teams are struggling this season, but the Chargers have pretty much been in every game. Their average losing margin is just 4.6.

Jets vs. Chargers Betting: Take the Jets with the Spread

Per DraftKings Sportbook, the Jets enter this game as 9.5-point road favorites. Oddsmakers don’t love the Jets’ chances in this game, to say the least, but don’t count them out when it comes to the spread.

The Jets looked improved in their last matchup with the division-rival Patriots, only losing by three amid a trio of touchdown passes from Flacco. Not to mention, they’ll be rested coming out of the bye week, while the Chargers just played last Sunday afternoon.

Although the Jets are 2-7 against the spread, they seemed to be turning a corner in Week 9, and I believe they’ll carry that momentum into this Sunday and ultimately cover.

According to DraftKings Sportsbook, the Chargers have failed to cover in seven of their last eight Sunday games in which they were home favorites, so that’s also something to keep in mind.

While the majority of bettors don’t agree with me, the Jets’ spread is where a significant portion of the money is headed. Per FanDuel Sportsbook, 45% of the spread bets and 62% of the handle have gone towards the Jets.

The Chargers on the Moneyline is Still a Lock

While I believe the Jets will cover the 9.5-point spread, I still think the Chargers will do just enough to win outright.

There’s no question the Chargers employ more talent than the Jets. I mean, at this point, who doesn’t?

Against this below-average Jets defense, it’s very possible rookie Chargers quarterback Justin Herbert puts up noteworthy statistics en route to his team’s third victory on the year. The Jets are allowing 29.8 points per game (30th in the NFL) along with 281.8 passing yards per game (29th).

The Chargers are also 2-2 when favored this year while the Jets are 0-8 when underdogs.

This will be a close game in my opinion, but don’t expect the Jets to travel out West and defeat a team led by a good young quarterback. Just can’t see it happening.

Per FanDuel Sportsbook, 63% of the bets and 69% of the handle are towards the Chargers moneyline.

Take the Over at all Costs

Although the Jets offense has been extremely bad for much of the year, the unit did improve against the Patriots, putting up 27 points. New England’s defense is also better on the scoring front than Los Angeles’, so there’s a chance the Jets continue that newfound success in Week 11. The Chargers are allowing 27.2 points per game (tied for 21st in the league).

On the other hand, the Chargers are putting up 25.1 points per game and will be facing a Jets defense that’s allowing an awful 29.8, so expect significant production from Los Angeles’ offensive unit on Sunday. The Jets defense is also 28th in total yards allowed per game and 29th in passing.

Taking all this into consideration, there’s a legitimate chance that a notable number of points are scored and the over (46.0) is hit. The Chargers have also hit the over in each of their last six games (six overs, three unders on the year) and carry an average total of 52.3 points. The Jets, on the other hand, have hit the over in four of their nine games (4-5) with an average total of 43.2 points.

While the over is responsible for 56% of bets, it’s only receiving 21% of the money, per FanDuel Sportsbook.