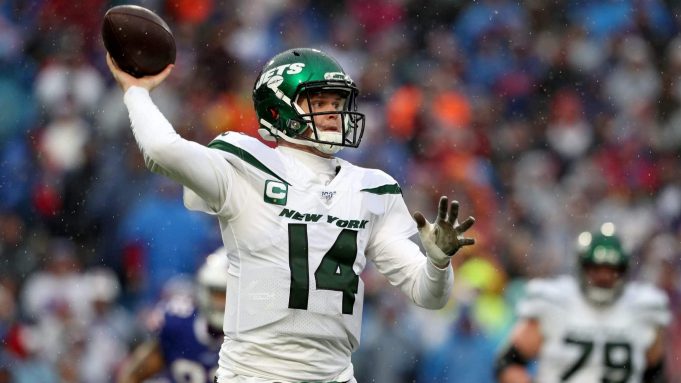 The New York Jets are fighting an uphill battle with Sam Darnold’s costly mistakes in the first half against the Indianapolis Colts.

The New York Jets hung with the Indianapolis Colts through one half, but two costly mistakes—both from Sam Darnold—should have been the writing on the wall.

The Colts dominated the Jets 36-7. A pick-six on the very first drive of the game spotted the Colts with a seven-point lead.

The third-year quarterback bounced back strong with a long drive that culminated in a Braxton Berrios touchdown after a brilliant scramble from Darnold. Shoutout to Mekhi Becton for holding that block for days.

Crazy good play from Sam Darnold. He’s at his best when he’s on the move pic.twitter.com/8UQlUzS7RX

Later in the half, Darnold’s turnover woes surfaced yet again. This time, the Colts couldn’t turn the interception into points, but they effectively took points off the board for the Jets. Red zone interceptions just can’t happen.

Darnold is down both of his tackles (Becton went to the locker room before halftime), his center, and his top four playmakers, but he has to be better than this first half. Although we love seeing Darnold pick up first downs and move the ball down the field, it doesn’t mean much when the interceptions come with it.

The second half was similar to the first half with the only exception being that the Jets offense couldn’t move the ball. Darnold threw another pick-six and the defense couldn’t keep the Colts from putting together long drives.

The Jets move to 0-3 with a Thursday Night Football matchup with the Denver Broncos looming. Head coach Adam Gase might be coaching for his job.