The NBA players are refusing to play in Wednesday’s games and Kyrie Irving’s concerns from June deserve more reflection.

Kyrie Irving deserves an apology from a lot of people right now, but more than that, he and his fellow players deserve to be heard.

The 2020 NBA Playoffs are on hold after the Milwaukee Bucks set off a chain reaction in response to the police shooting of Jacob Blake that occurred in Kenosha, WI. Milwaukee refused to play in their game against the Orlando Magic while attempting to contact the attorney general of Wisconsin. Shortly thereafter, the other two games were called off as well.

The Brooklyn Nets are no longer in the NBA bubble and Irving never even made it down to Orlando, instead opting to continue his recovery from shoulder surgery. However, Kyrie Irving is still one of the most influential players in the league and as one of six vice presidents of the National Basketball Players Association, he holds plenty of sway among his peers.

Prior to the bubble, he voiced his concerns regarding restarting the season and taking the focus away from social justice issues. 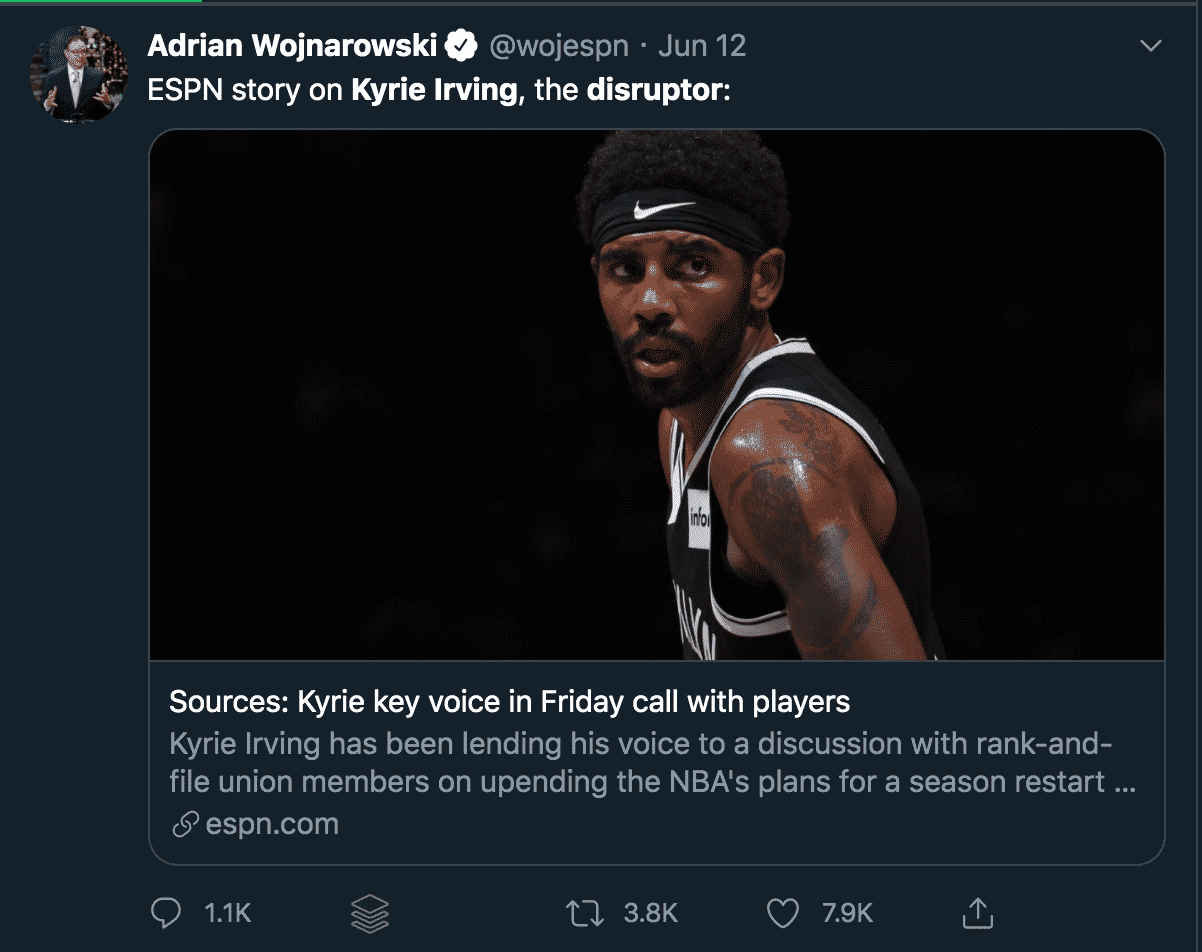 “Kyrie Irving, the disrupter” didn’t age well. Irving was doing his job as a leading voice for his peers and voicing valid concerns. Clearly, a situation like the police shooting of Jacob Blake is one of the reasons why Irving and other players were wary of restarting the season.

Ultimately, the players decided to move ahead with the season and they formed a unified front. But Irving was vilified for his concerns and plenty of NBA media (not just Woj) were all over the mercurial star.

This is how Chris Haynes of Yahoo Sports reported a call between Irving and a group of players:

“A Zoom conference call led by Brooklyn Nets star Kyrie Irving on Friday night that included 80-plus NBA players — and WNBA players — established a unifying front in which opinions on the pros and cons of returning to play were discussed, league sources told Yahoo Sports.

“The call, which lasted an hour and forty minutes, focused on the role players could play in combating systemic racism, investing in black communities and sticking together through this process, sources said.

“Irving made it known he was strongly against going to Orlando, Florida, to resume the season, opting instead to work on the frontlines in his community to focus on racial oppression and systemic racism in the aftermath of George Floyd’s homicide, sources said.”

This reporting frames Irving as a thoughtful leader who puts others before himself. He’s not the disruptor people make him out to be. Irving is a different kind of guy for sure, but he’s not the villain many people want him to be.

This is a huge moment for the NBA. It feels similar but different to the night when Rudy Gobert tested positive for coronavirus and the NBA suspended operations indefinitely. Of course, this protest is much different than a global pandemic, but it’s difficult to see the NBA restarting without something significant happening.

Plenty of people scoffed at Irving’s concerns a couple of months ago and he was labeled a “disruptor.” This definitely warrants an apology, but he deserves more. Perhaps next time he speaks people won’t be so quick to dismiss him.

People are freaking out over Scott Foster reffing Nets-Celtics