The New York Guardians are winless on the road. The Dallas Renegades are winless at home. Something’s going to give on Saturday afternoon.

The Empire City and Lone Star State’s battle on the football field is ready to write a new chapter.

A crucial interconference battle will be staged on Saturday, as the New York Guardians head south for a showdown against the Dallas Renegades (5:00 p.m. ET, Fox). The game will take place at Globe Life Park in Arlington, the converted home of MLB’s Texas Rangers.

This game could leave lasting implications on the XFL playoff picture despite the contrasting divisions. New York (2-2) is tied for the de facto wild card spot in the East with the DC Defenders. The Guardians returned to the win column with a 17-14 win at MetLife Stadium over the Los Angeles Wildcats. However, New York enters winless in a pair of road games, neither of which were particularly close (outscored 56-9 in DC and St. Louis).

Dallas (2-2) is currently situated into the second playoff slot in the West. They recently lost an in-state showdown with the undefeated Houston Roughnecks by a 27-20 final. The Renegades are looking for their first win on the Rangers’ former field, losing to Houston and St. Louis, the latter loss coming on opening weekend.

With their respectable showings in Week 4, the Guardians saw their odds toward the XFL Championship Game become slightly more favorable after a bottom-out following Week 2’s shutout loss to the Defenders. 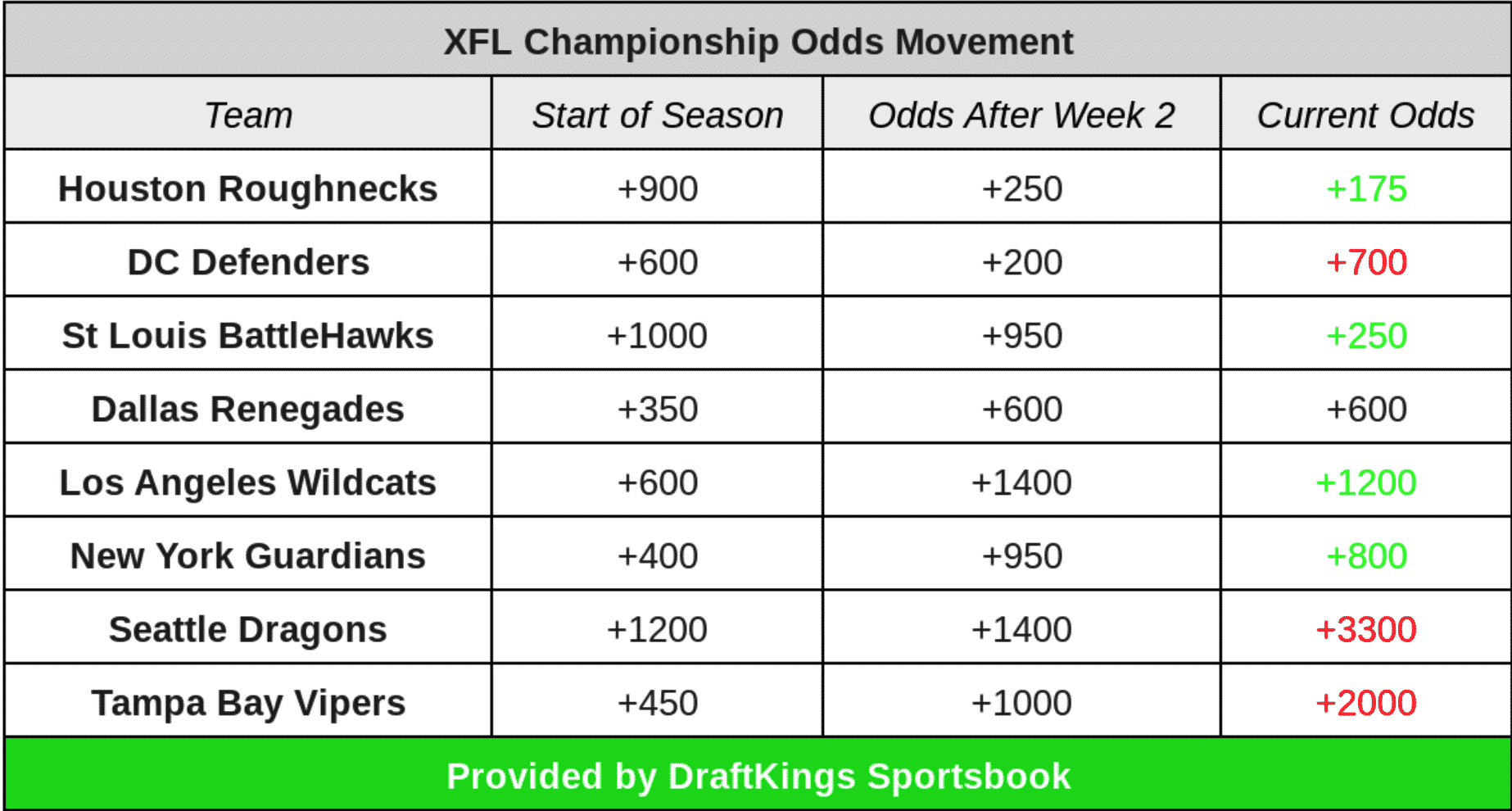 Both teams enter with major questions at quarterback. The Guardians gained some offensive traction last weekend with Luis Perez starting for the injured Matt McGloin. Week 1 starter McGloin was a full participant in practice this week, leaving some doubt whether Perez’s reign will continue. Meanwhile, Dallas will be without their own franchise man, Landry Jones, for the next two weeks. Former AAF thrower Philip Nelson subbed in during the latter portions of the Houston game. The Renegades also activated Syracuse alum Eric Dungey.

Either way, with backup quarterback potentially taking center stage, scoring could well be at a premium.

The passing and blocking have been a disappointment for the Guardians thus far, but they’ve managed to tread water with a solid run game. Last week, a rushing tandem of Victor or Tim Cook united for 113 yards on the ground, with 81 coming from Victor. The Towson product currently ranks sixth in the league in rushing (180 yards) and averages 4.5 yards per carry.

New York managed to keep the ball away from a potent Los Angeles offense with their ground game, taking the time of possession battle at just over 33 minutes. Dallas is likewise known for its rush attack, so the longer the Guardians can keep the ball away from the homers, the better. Expect a healthy dose of Victor as the team tries to figure its quarterback situation out.

The oddsmakers gave New York little props for their win over the Wildcats, making them a touchdown-plus underdog against the equally .500 Renegades. But, if the offense is able to even slightly resemble that passable performance at MetLife last week, keeping pace with a Dallas squad working with a backup thrower should be manageable. The Big key for the Guardians will be stemming early bleed. New York has given up touchdowns in each of their opening defensive possessions on the road.

This is certainly a game that Rob Manfred could love, meaning that it could end fairly quickly. With questions at quarterback, rushers could rise. The aforementioned New York attack could be combated by a two-headed monster of former NFLers Cameron Artis-Payne and Lance Dunbar. With time coming off the clock and yards being eaten up, there could be little time left for scoring. Bet the under on the scoreboard, but the over on the stat sheet, particularly in the rushing section. Elvis Andrus would be proud of all the running!

While sports betting is not legal in New York yet, DraftKings Sportsbook is live in New Jersey, Pennsylvania, Indiana, Iowa, New Hampshire, and West Virginia. You can sign up here.