Offensive injuries on both sides could keep things relatively close between the New York Guardians and Los Angeles Wildcats on Saturday.

While each team enters 1-2, they descend upon MetLife Stadium trending in different directions. The Guardians topped the Tampa Bay Vipers in their East Rutherford debut on Feb. 9, but have since dropped two road games thanks to listless offensive performances. On the other side of the country, the Wildcats reached the win column for the first time with a dominant 39-9 win in another interconference tilt against the DC Defenders last weekend. 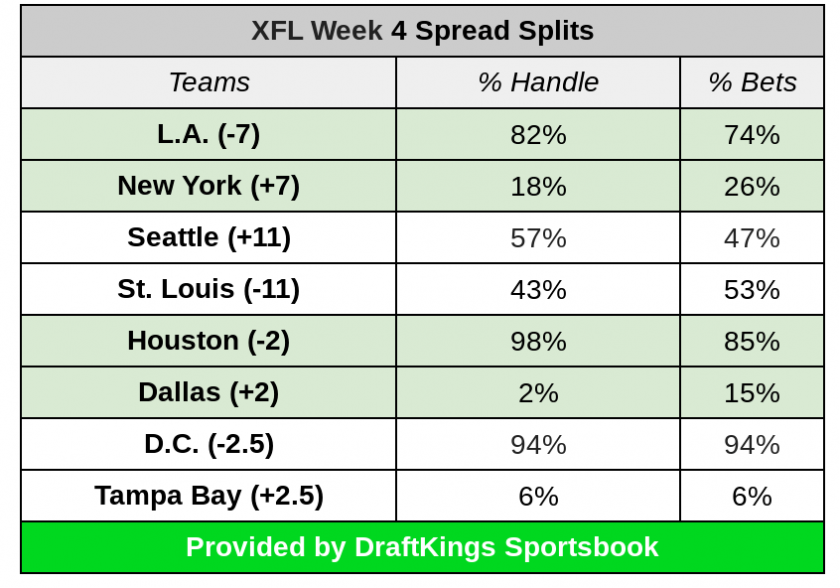 The Guardians enter this game reeling on offense. Starting quarterback Matt McGloin has already been ruled out, leaving a presumed tandem of Marquise Williams and Luis Perez in his wake. Several Los Angeles deficiencies and unforeseeable circumstances could lead to a low-scoring game.

Headed into a day whose temperatures will hover in the 30s, the Wildcats will be missing two of their biggest playmakers. Receiver Nelson Spruce (the XFL’s second-leading receiver) has already been ruled out while running back Martez Carter (two touchdowns against DC last week) is doubtful. The offense has been rejuvenated under NFL veteran Josh Johnson, but how will he fare without his fellow offensive studs?

An over/under of 39 seems low, especially in a league where possessions can produce as many as nine points. But if the Guardians can hold the ball and dictate the pace of the game, it can be one of the sneakier hits of Week 4.

If the Wildcats are able to overcome the losses of Spruce and Carter, things could get ugly in a hurry. Taking an early lead in the cold weather could go a long way, and that’s certainly doable against the Guardians, who have allowed opponents to enter the red zone on each of their first three opening possessions (allowing touchdowns on each of the last two against DC and St. Louis).

The Guardians were struggling on offense as is with McGloin, and now must navigate without him. Los Angeles’ defense enters with strong momentum after taking down a Defenders team that many saw as the class of the XFL’s East Division, forcing Cardale Jones and company into five turnovers.

Offensive line issues have also been a problem for New York, making an already shaky quarterback situation even more tenuous. Already reeling on offense, the Wildcats can cruise if they prey on the proposed tandem of Williams and Perez.

Logic dictates, at this point, for money to go toward the Wildcats, who could ride a wave of momentum into a playoff berth. Last week’s upset win over DC (featuring the most points scored by a single team in XFL history thus far) put them in a comfortable place with the schedule working in their favor (primetime showdowns with Tampa Bay and Seattle, a combined 1-5, await over the next two weeks).

Until the Guardians sort out their offensive issues, it doesn’t seem wise to bet on them, but a passable defensive effort and injuries to marquee Wildcats could keep this one relatively manageable.

With NY online sports betting still in the works you can get up to $1,000 free from DraftKings in New Jersey here.