New York Guardians quarterback Matt McGloin will not partake in the team’s return to MetLife Stadium on Saturday afternoon.

New York Guardians quarterback Matt McGloin will not play on Saturday afternoon, as the local team returns to MetLife Stadium.

McGloin, 30, has officially been diagnosed with a thorax injury. He was a limited participant in practices held this week at the Torne Valley Sports Complex in Hillburn, NY. McGloin has started each of the Guardians’ three games thus far.

A sack that ended the Guardians’ first drive forced McGloin to leave last Sunday’s game against the St. Louis BattleHawks. He returned to the game but did not return to the field for the second half.

The Penn State alum got off to a respectable start to his XFL career during the league’s opening weekend, as it was he who tallied the first two scores in Guardians’ history. McGloin scored on a one-yard rush on their first-ever possession and would later throw a touchdown pass to Colby Pearson. New York topped the Tampa Bay Vipers by a 23-3 final in East Rutherford.

However, a two-week road trip proved treacherous for McGloin. The follow-up to the Tampa Bay triumph was followed by a brutal showing in Washington, as McGloin went 8-of-19 for 44 yards and two interceptions. He was eventually benched in what became a 27-0 Guardians’ loss at the hands of the D.C. Defenders. McGloin fared only slightly better in St. Louis, going 8-for-11 for 84 yards and an interception before his medical departure in an eventual 29-9 loss in the Gateway City.

McGloin’s primary substitute in Washington and St. Louis was Marquise Williams, a former invitee to Green Bay Packers training camp. Williams led the Guardians (1-2) to a field goal against the BattleHawks but failed to end a lengthy touchdown drought. He was likewise pulled after posting a line of 7-for-15 for 94 yards.

Third quarterback Luis Perez eventually stepped in and found Austin Duke for a late score in St. Louis, ending a streak of 26 consecutive New York possessions (including a series of kneel-downs against the Vipers) without a touchdown.

Williams and Perez each split reps with the first team in Hillburn this week. Each recently partook in the Alliance of America Football. Perez was a starting quarterback for the Birmingham Iron while Williams backed up Logan Woodside with the San Antonio Commanders.

Each made a name for themselves on the college level. Perez earned the Harlon Hill Trophy, annually awarded to NCAA Division II’s most valuable player, at Texas A&M-Commerce. Williams is one of the most prolific quarterbacks in the history of the University of North Carolina football, his name frequently appearing at the top of the program record lists for both passing and rushing).

All other reported New York injuries were given a status of “probable”, as the Guardians prepare to welcome in the Los Angeles Wildcats on Saturday (2:00 p.m. ET, ABC). Running back Darius Victor (ankle) and linebackers Garrett Dooley (ankle) and Jawuan Johnson (head) were listed as full participants in practice this week.

Los Angeles (1-2) is likewise looking to even their record, but they’ll be missing major components upon their New York visit. Nelson Spruce, the XFL’s second-leading receiver, will not play due to a knee injury. Martez Carter had two rushing touchdowns in the Wildcats’ 39-9 win over D.C. last weekend, but has been labeled doubtful with hip issues.

The Guardians are +8 on DraftKings Sportsbook and the public is betting heavy on the Wildcats. 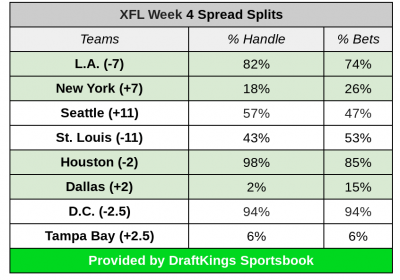 While sports betting is not legal in New York yet, DraftKings Sportsbook is live in New Jersey, Pennsylvania, Indiana, Iowa, New Hampshire and West Virginia. You can sign up here.