How do you do, Mr. Pro Bowler? “Very well,” replies Jamal Adams, the New York Jets man of the hour on the eve of the 2020 NFL Pro Bowl.

The best safety in the league will be the Jets’ lone representative when the AFC takes on the NFC in Orlando on Sunday. It’ll mark No. 33’s second-straight appearance, but the first as a First-Team All-Pro—the top honor (other than MVP, Offensive or Defensive Player of the Year) any one football player can achieve. (His Second-Team All-Pro selection a year ago served as an outright crime.)

Anyway, fans aren’t the only individuals who realize the pure brilliance Adams offers up on Sundays. Players do, as well. Minkah Fitzpatrick, Earl Thomas and others couldn’t hold back their applause for the man, ahead of Sunday.

The most interesting Adams moments materialize when his pure impact isn’t fully apparent on the broadcast, the plays in which he creates the play, yet the glory travels elsewhere. It’s what comes to a stud strong safety who can do it all—set the edge, lock down run support, eliminate a tight end in man coverage, handle flat responsibilities or even play a two-deep zone better than most free safeties.

A particular play against the Pittsburgh Steelers in Week 16 provides one of those moments. Tarell Basham receives all the glory, yet it was Adams’s actions that locked up the turnover for the Jets.

Jamal Adams and Tarell Basham, the heart and soul of the New York Jets locker room in a lot of ways, combine on this turnover against Pitt.

In a lot of ways, Adams and Basham represent the heart and soul of the Jets’ locker room. The two men are usually the life of the party. Adams is on one side, always up to something, while Basham is the main man usually in control of the tunes, messing around with his teammates while they attempt to remain stout at the podium with the media taking its best shot. 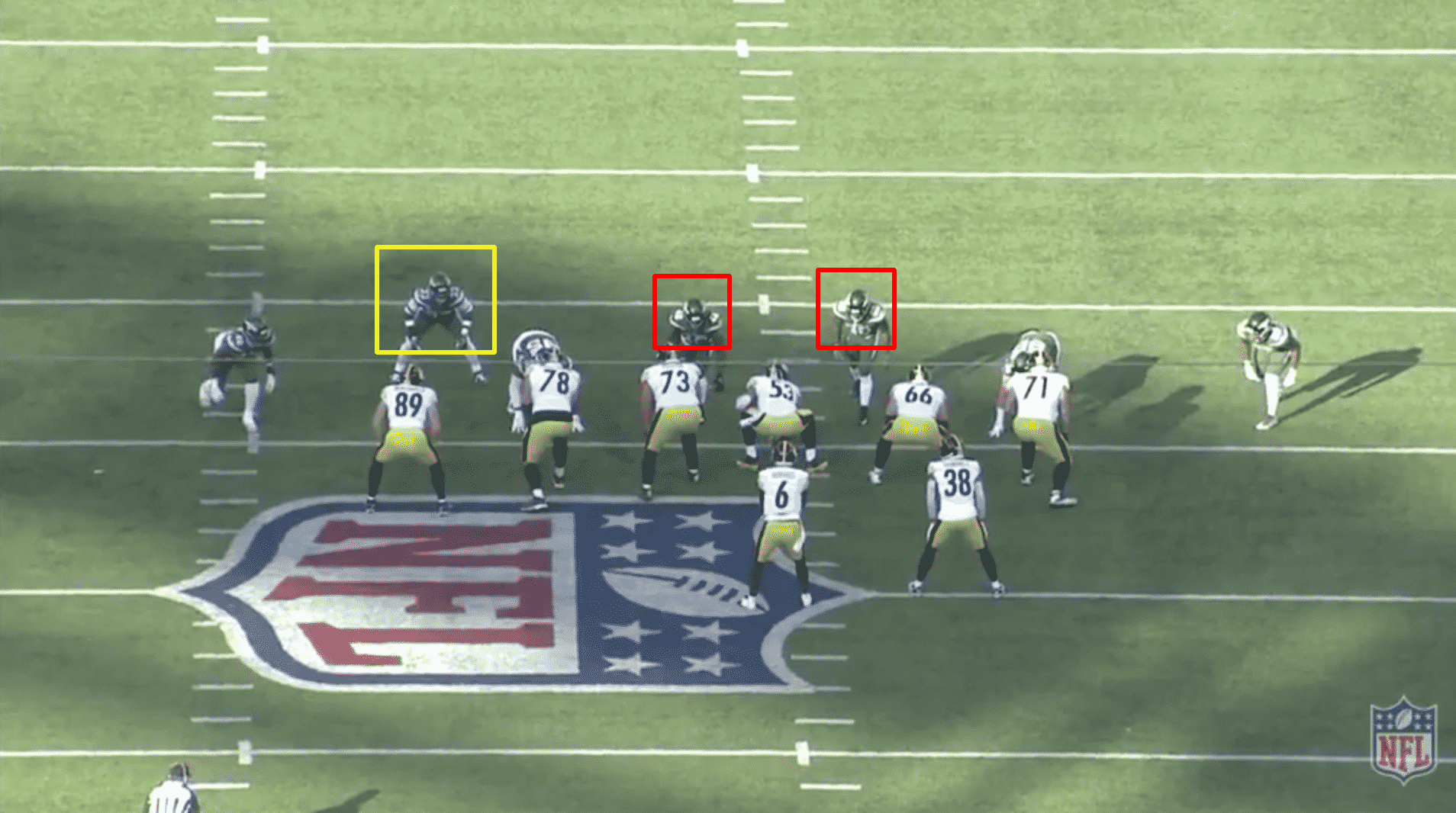 Gregg Williams rolls with the pressure look. By placing both inside linebackers in the A-gap, the Pittsburgh Steelers offensive line is forced to account for seven players at the line of scrimmage (including Adams, who is firmly in the box).

The Steelers offensive line must turn its attention to the left side considering the tight end has a route and the running back will be picking up inside.

Williams designs a five-man rush with six in coverage. Both A-gap shows are coming, as is Jamal Adams, and the two defensive tackles. Jordan Jenkins—on the viewers’ left side—is dropping, while Basham—on the viewers’ right side—is bluffing into a drop. 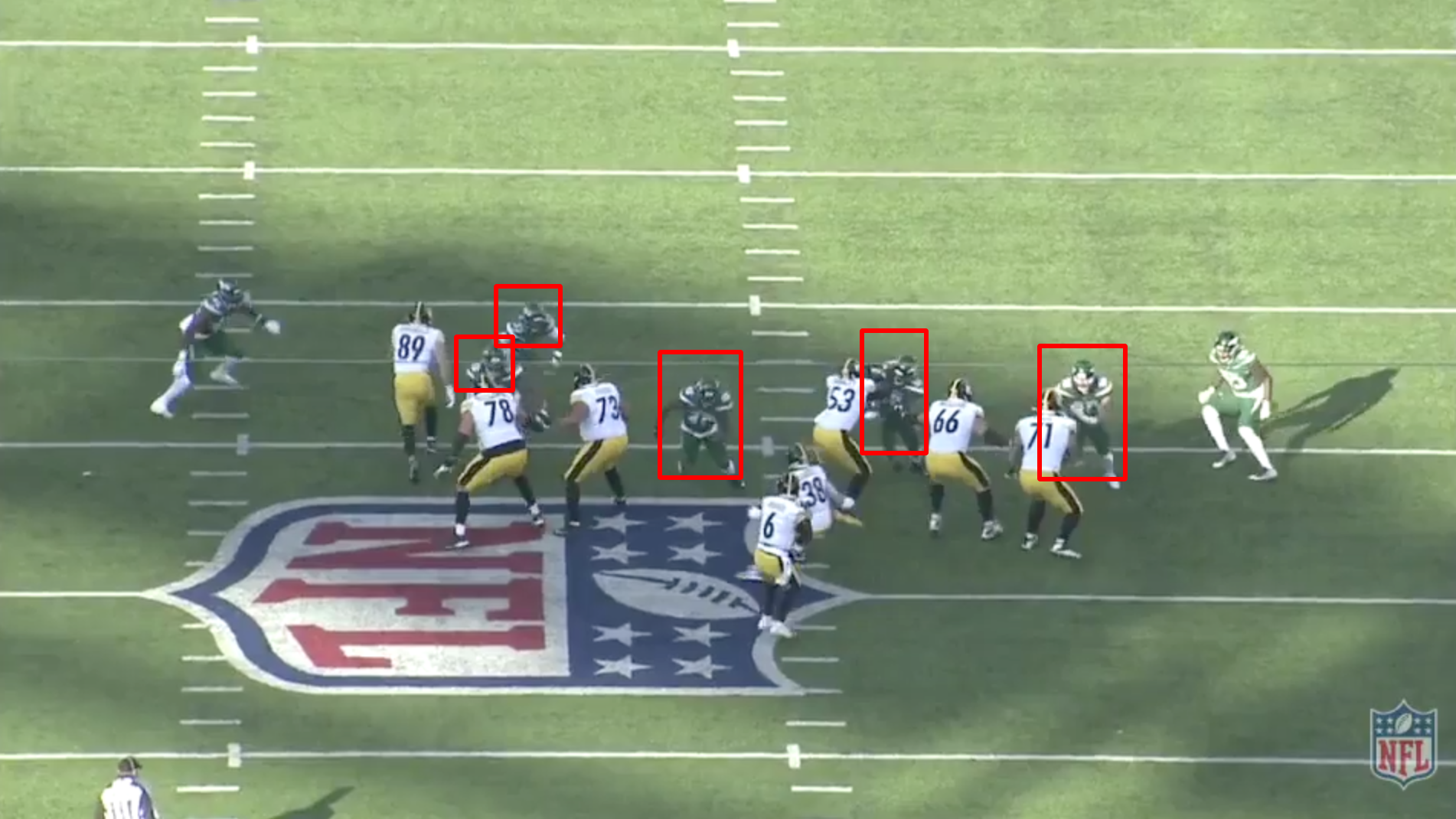 Interestingly, Williams loves working on drops in practice. It doesn’t matter if you’re a traditional second-level backer or an edge; you will practice drops into zone coverage at One Jets Drive under Gregg Williams.

The key, as it develops, is Adams timing his rush correctly and beating the left guard to the punch. As long as he beats that left guard and gets to Devlin Hodges, the Steelers offense will be rushed. 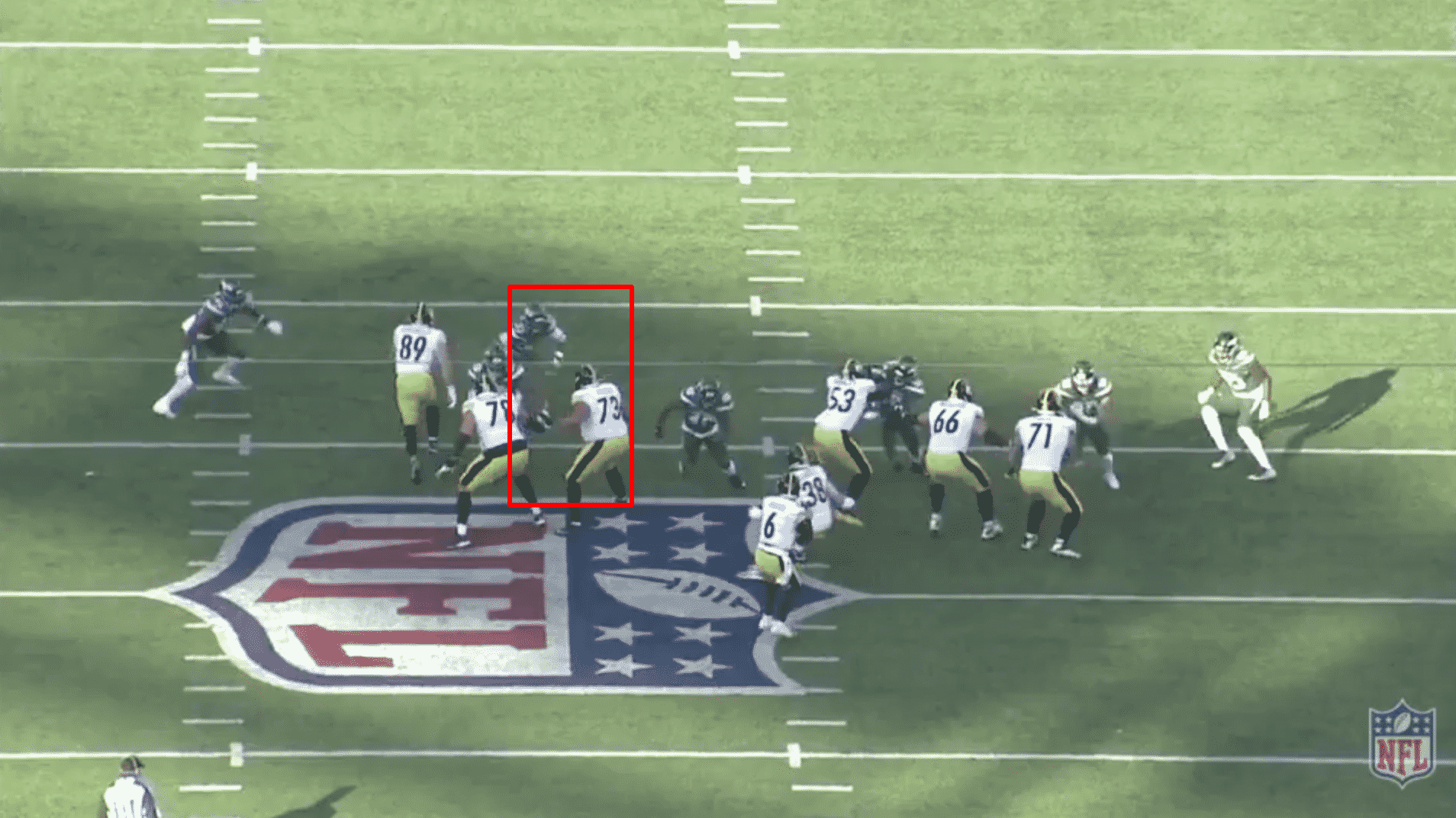 The left tackle is forced to pick up Quinnen Williams, who does a tremendous job grabbing his attention. The running back and center have to handle the A-gap situation with both second-level linebackers.

Since the Steelers offensive line had to account for four possible Jets rushers on the left side, the left guard naturally slides left. This is important; the slide left goes against the natural grain that is Adams flying down the A-gap. There’s no shot of the guard stopping in his tracks to pick up an athletic Adams. 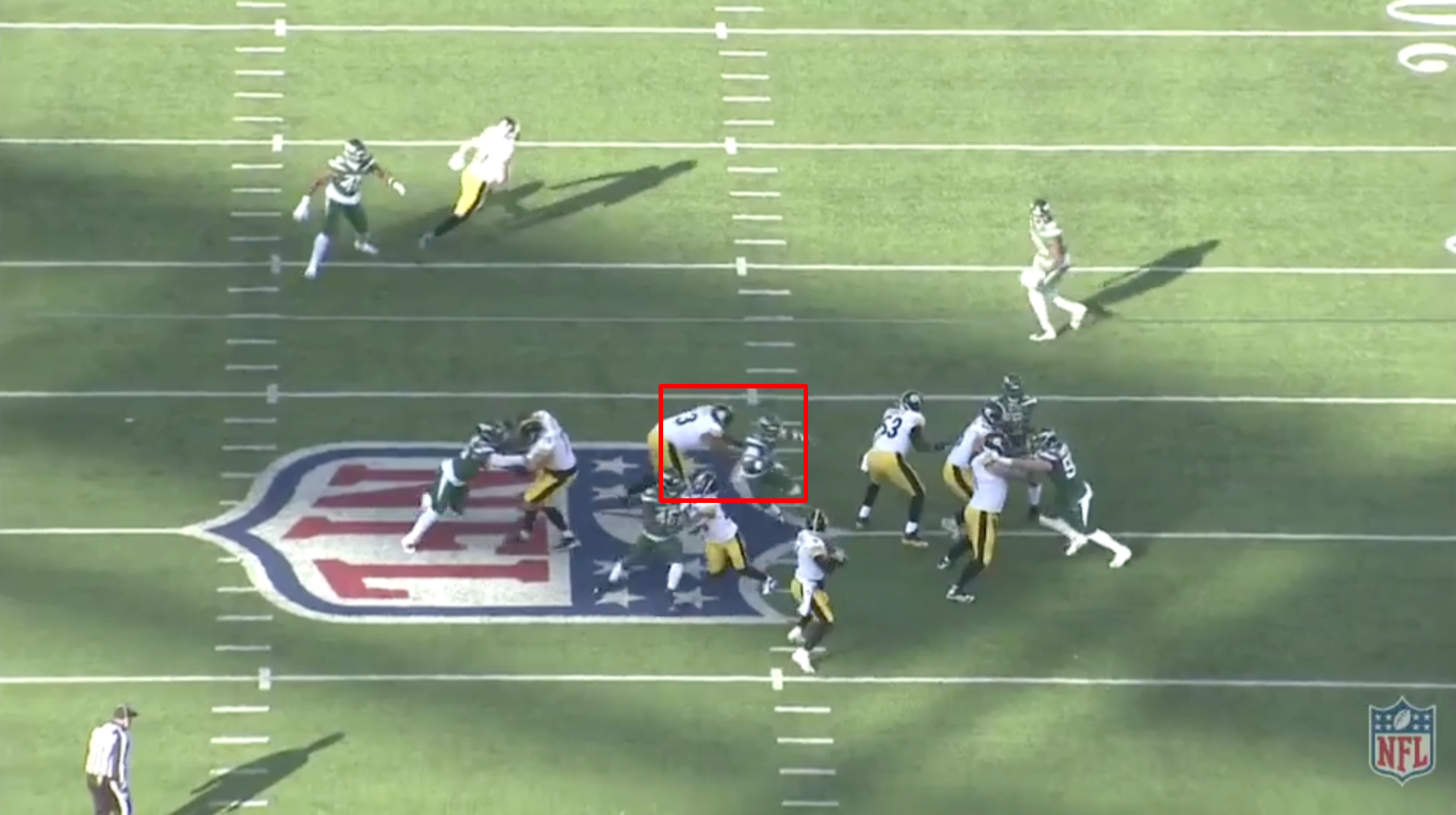 Of course, Adams beats the guard, and, at this point, Hodges is forced to make a quick decision.

He thinks he has the tight end on the cross, who’s clearly beyond Jenkins’s zone. But what he doesn’t see is the Basham bluff and drop, which steals the spotlight of the play with his Lynn Swann-like catch. 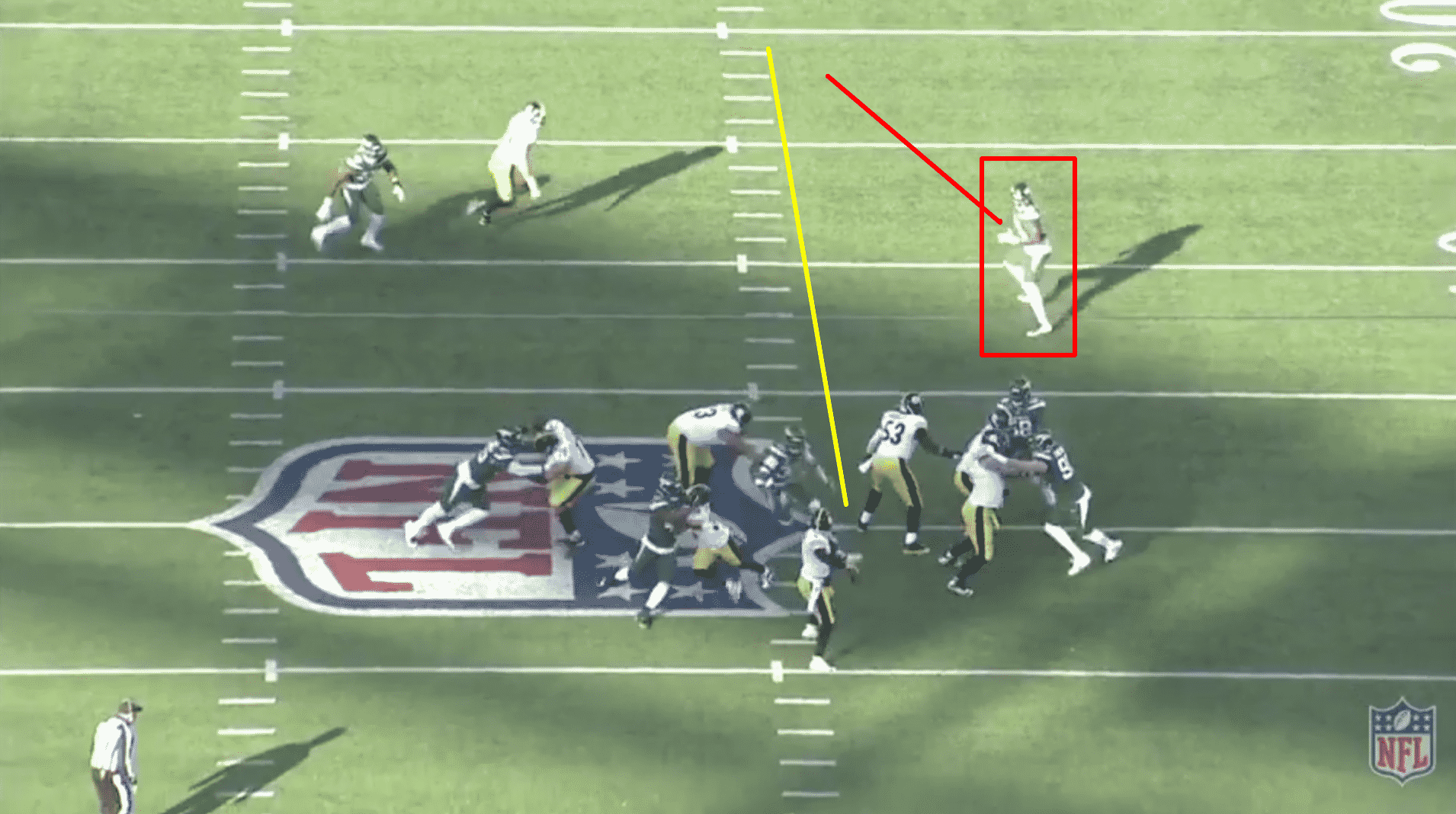 If Adams doesn’t beat the guard, the one may not happen. Hodges can tuck it, look to get outside the pocket and run for a few, throw it away or even find somebody who breaks off a route.

But No. 33 gets it done, as he did so often when rushing the passer in 2019 (by necessity, mainly, due to the team’s weak edge-rushing situation). 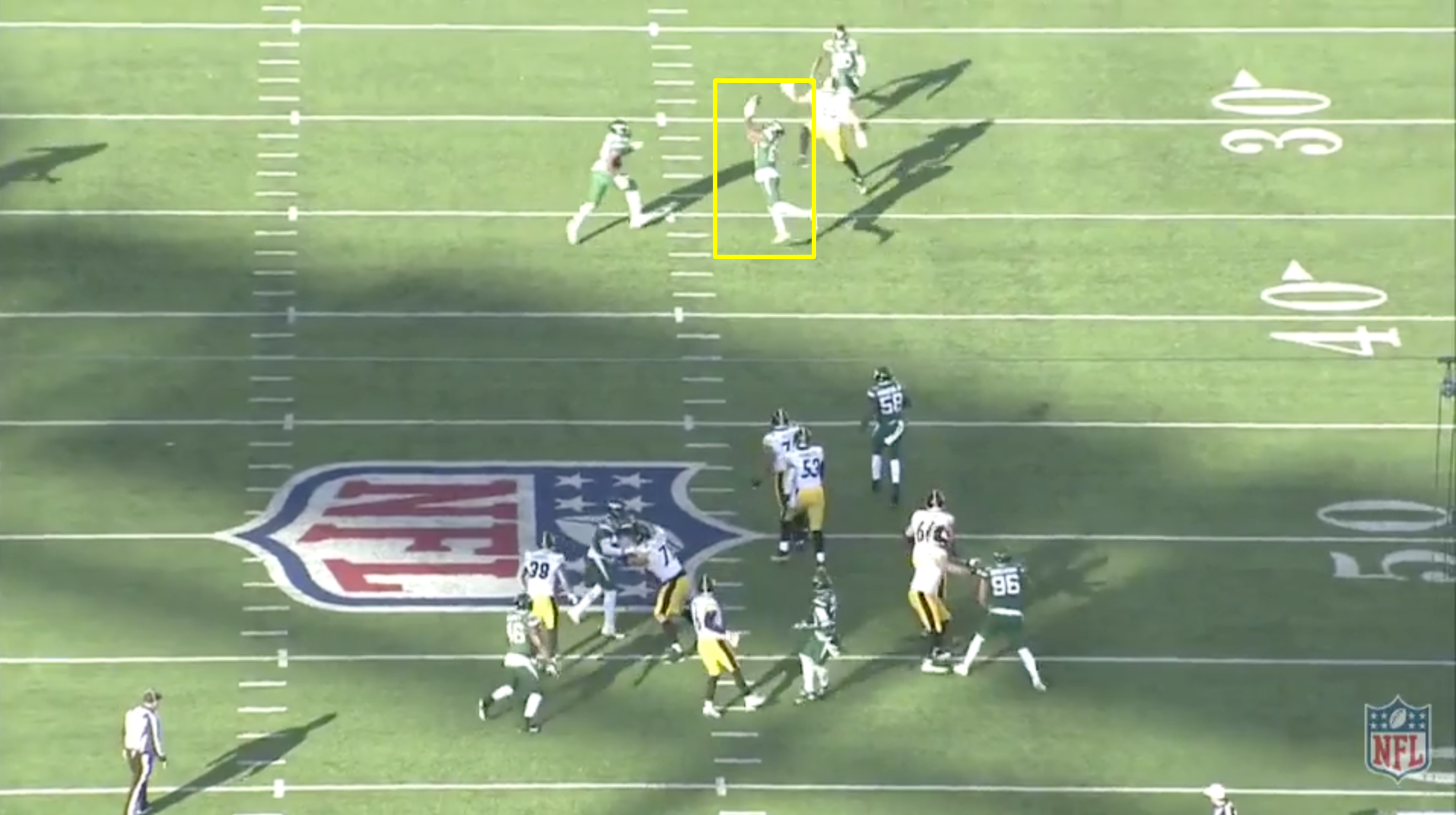 For Basham, it was the first (and only) interception of his career. For Adams, it was yet another brilliant job when rushing the passer, understanding it was his action that would set everything up for the better. For (Gregg) Williams, it was just another example of a perfect scheme.

All year, Williams understood the strengths and weaknesses of his defense, and literally called games with a serious handicap (no conventional four-man pass rush due to weak edges). So what does he do? He brings both inside backers, and Adams, while dropping both edges.

The instant Gregg Williams is blessed with a legit four-man pass rush is the moment this defense becomes one of the best in the NFL. Oh yeah, Adams will also move from “best in the league” to “beyond scary,” when that happens.

For now, all we can do is show you how the defensive mind of Gregg Williams works around the unit’s deficiencies, how Tarell Basham bluffs and drops to perfection, and how Jamal Adams turns a run-of-the-mill rush at the quarterback into the key to a New York Jets turnover.