While the New Jersey Devils need a turnaround this season, let’s relive a historic Devils’ comeback over the Philadelphia Flyers during the 2000 Stanley Cup Playoffs.

Not a come from behind victory in a regular-season game, nor a comeback in a best of seven series during the Stanley Cup playoffs.

New Jersey hosts the Philadelphia Flyers tonight at the Prudential Center (7 p.m. ET, MSG+2), but enter the contest with two wins through its first 10 games on the year. The comeback needs to officially start tonight at the Rock before it’s too late—because “too late” is right around the corner for Jersey’s team.

John Hynes addresses the media ahead of tonights matchup vs. the Flyers.

"At the end of the day we have to play a lot better collectively as a team than the last time we played Philly." pic.twitter.com/1U14nRKaSl

Speaking of comebacks and the Flyers, ESNY relives the New Jersey Devils’ historic comeback over Philadelphia during the 2000 Eastern Conference Final when the Devils trailed 3-1 in the series.

For the record, the Devils became the 14th team in NHL history to come back and win a series after trailing 3-1 in the playoffs but were the first team to accomplish the feat in a Conference Final (per Hockey Reference).

The memorable run of captain Scott Stevens and the Devils hoisting their second Stanley Cup championship began with a series sweep over the Florida Panthers during the Eastern Conference Quarter-Finals.

New Jersey shut down Russian sniper Pavel Bure and the Cats while outscoring Florida 12-6 in the four games. However, the first three games were all decided by one goal (4-3, 2-1 & 2-1).

Things really started to heat up and portrayed classic playoff hockey when Jersey faced-off with the Toronto Maple Leafs in the Semi-Finals. The series felt more like the Conference Final, because both teams were that deep in all areas on the ice, and both fan bases could feel the intensity during all six games.

New Jersey trailed Toronto 2-1 at one point in the second round, but won its next three games to advance to the Conference Final – where the Devils perhaps experienced some déjà vu.

Jersey met the City of Brotherly Love in the Conference Final en-route to the team’s first Stanley Cup championship back in 1995. Still, 1995 was a much different process to advance past Philly.

The 2000 Eastern Conference Final opened up at the (then) First Union Center for a Sunday matinee. New Jersey jump-started the series right where it left off against Toronto by outplaying the Flyers to a 4-1 victory.

Scott Niedermayer scored 55 seconds into the game, while Petr Sykora, Bobby Holik and fan-favorite, Claude Lemieux netted the other three goals for Jersey.

It appeared the 2000 Eastern Conference Final was going to be a short series after the Devils jumped out to a 3-1 towards the end of the second period. The “A-Line” was in full swing with Patrik Elias and Jason Arnott finding the back of the net, and the Flyers seemed deflated on home ice.

However, the Flyers turned around the series with less than one-minute remaining in that same second period, after an Eric Desjardins goal which not only brought the Flyers back to life but also their rambunctious fan base.

That stacked Flyers flexed their talent, and Philly scored three unanswered goals to take Game 2 and even up the series. 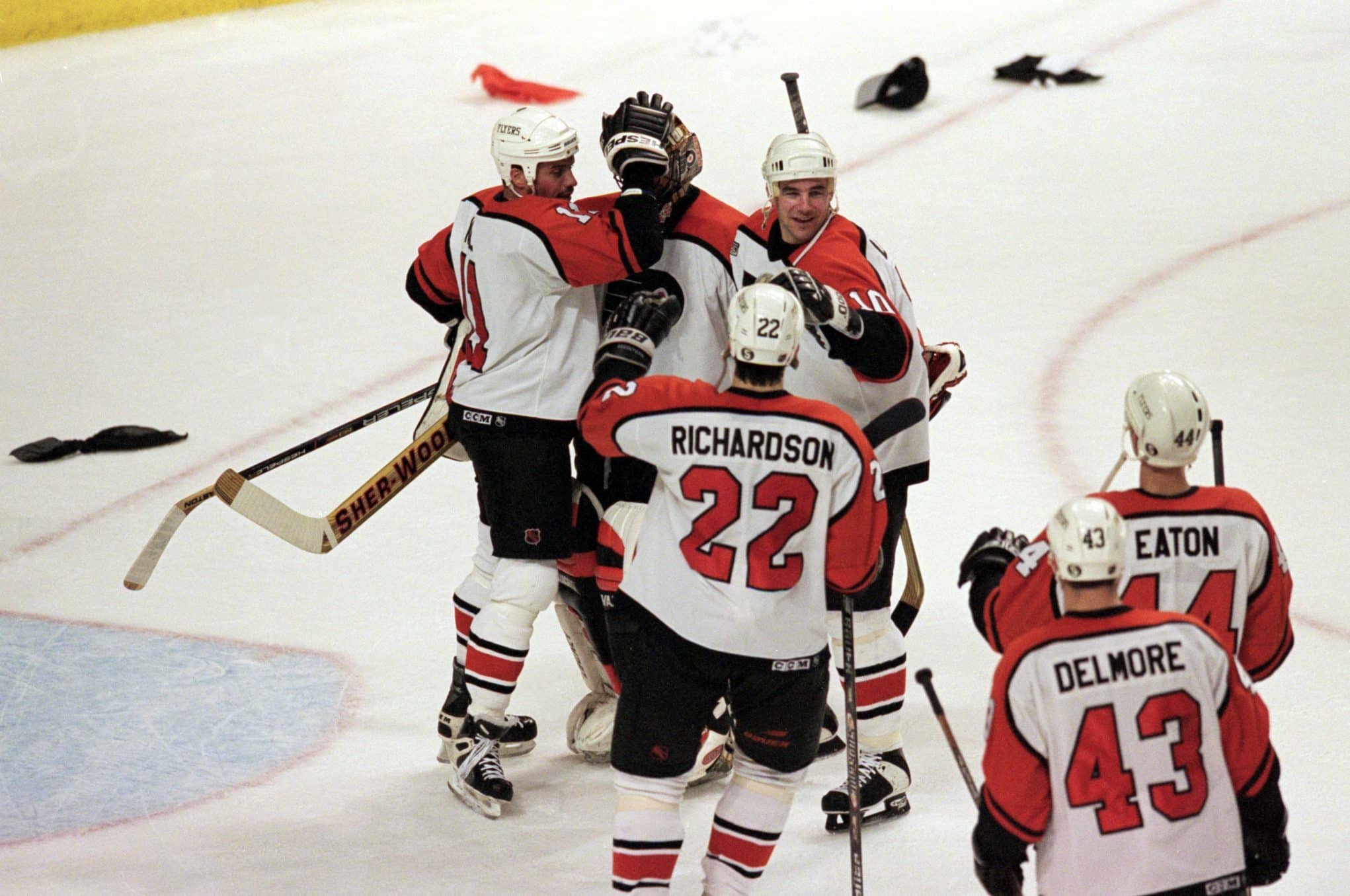 Games 3 and 4 were miserable for the Devils and their at Meadowlands. The Flyers netted timely goals, while rookie goaltender Brian Boucher did his part with the big and timely saves to play mind games with the Devils offensive attack.

Philadelphia’s fans invaded the old Continental Airlines Arena (in the upper deck of course), and witnessed their Flyers celebrate 4-2 and 3-2 victories over a Devils team that once skated with confidence like none other.

Keep in mind the Flyers’ roster entailed size, physicality with a mix of speed and goal-scoring prowess; Desjardins; a young Simon Gagne, who Martin Brodeur referred to as one the purest goal-scorers he’s ever faced, Keith Primeau was a force to be reckoned with; John LeClair could still hang and was a 40-goal-scorer that season; and let’s not forget that Mark Recchi, yes the same Recchi you’re thinking of, was a stud to say the least for that Flyers team.

Head coach Larry Robinson’s postgame press conference after Game 4 was brutally honest, and it seemed to have hit the Devils hard – because the rest was history, literally. Seriously, no one’s ever probably seen Robinson that miserable in a hockey arena before.

Jersey headed back to Philly with the Flyers expecting to advance to the Stanley Cup Final for the second time in four years (1997). Yet, Jersey found its groove and started playing Devils old fashioned hockey.

New Jersey took Game 5 in convincing fashion by a final of 4-1. The tides were changing, and both parties knew that if the Devils won Game 6 – Philly was in trouble

Knowing that, the Flyers countered back by inserting future Hockey Hall of Famer, Eric Lindros, back into their lineup. It marked the first time Lindros dressed since March 12 of that season due to concussion injuries.

Game 6 was a memorable showdown between the two bitter rivals. The game was scoreless until Claude Lemieux, Mr. Clutch,  netted a goal in dramatic sequence past the midway point of the third period. Five minutes later Alex Mogilny, who was acquired late in the season, netted his third goal of the playoffs.

With the Devils leading 2-0, who but Eric Lindros scored with less than 30 seconds left in the regulation, but the rocking Meadowlands crowd cheered the Devils onto victory and a Game 7 took place two nights later in South Philly.

I think everyone was nervous, especially considering how the series played out. It was one of the most unpredictable series NHL fans ever witnessed in recent memory and entailed plenty of star power.

While Patrick Elias is inked in Devils’ history for eternity – Game 7’s are where legends are born. Elias put his stamp on the hockey world that night in Philadelphia.

The (then) 23-year-old scored the game’s first goal during the early stages of the first period – exactly what Jersey needed to win that game and from him of all skaters.

Later in the period, the memorable Stevens hit on Lindros took place. Regardless in the Flyers were outplaying the Devils or not, it was a game-changing moment that is a part of hockey history for the better, or worse.

Flyers’ forward Rick Tocchet was annoying, to say the least in that series and he just wouldn’t go away – the pest scored early in the second period to tie the game and the contest headed into the final frame at 1-1.

It seemed that most fans were just waiting for something to happen as the game proceeded…still, Elias took the air out of the Flyers’ arena by putting home a loose puck past Boucher with less than three minutes left in regulation.

The number of emotions that the Devils and their fans must have experience can be told, forever. It almost felt like New Jersey won the Stanley Cup after that goal – and borderline didn’t matter what happened in the next round.

New Jersey and Martin Brodeur took care of the rest and closed the door on the Flyers to complete one of the most memorable comebacks in Stanley Cup playoff history.

Fans know the rest of the story, but now the 2019-20 Devils need to rewrite a story of their own – before they’re history for the wrong reasons.

NEXT: Don't Expect This Devils Legend To Be The Next HC