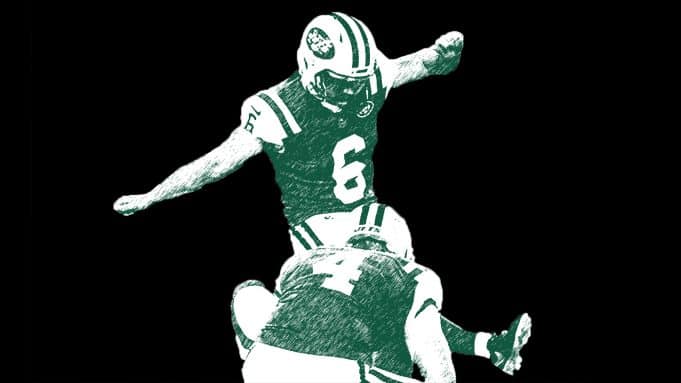 Taylor Bertolet had struggled as the New York Jets’ kicker this preseason, but two deep field goals strengthened his hold on the job.

Taylor Bertolet is the only player of his kind on the New York Jets‘ roster. Yet, his status was nonetheless in question entering Saturday’s preseason game against the New Orleans Saints.

The 2019 preseason was, unfortunately, turning into a case of déjà vu for the kicker. He was called back to Jets camp after the sudden retirement of Chandler Catanzaro. It was a tall task for Bertolet, whose lone professional regular-season experience has come in the deceased Alliance of American Football.

The experience seemed to be too much to bear after last week’s visit to Atlanta. Bertolet missed two extra points in the Jets’ 22-10 win over the Falcons.

Bertolet was in Jets camp last season but was relieved of duty after the emergence of future Pro Bowler Jason Myers. The departure of Myers to Seattle reopened the Jets’ kicking competition

Heading into Saturday’s game, Bertolet had one thing on his mind: WIN.

“Just focus on the now. Coach Gase has an acronym, WIN: What’s Important Now,” he explained after the game. “I wasn’t dwelling on the past it was focusing on this game, going one-for-one on each kick.”

It obviously worked for Bertolet. The Jets fell 28-13 to the Saints, but, Bertolet served as a silver lining, scoring more than half of New York’s points.

He launched a pair of triples from deep. A 48-yard strike narrowed the gap to 13-10, and Bertolet would later tie the game with a deeper 56-yarder. That broke his previous career-best of 53 set with the AAF’s Salt Lake Stallions.

Teammates grabbed and hoisted Bertolet up as the latter kick sailed through the uprights.

“I don’t think I’ve ever been picked up after a field goal,” Bertolet said with a smile. “I guess that was pretty fun.”

Head coach Adam Gase said Jets would continue to go “day-to-day” when it comes to adding another kicker. He nonetheless offered praises.

“He looked good tonight and did a good job of making the ones he had an opportunity on,” Gase said. “We wanted to give him opportunities. You can see his leg is live. It’s all about controlling it.”

Bertolet said that he isn’t concerned about the Jets adding another leg, no matter their final decision.

“I don’t think my mindset’s any different if I’m the only guy or if there’s competition. I’m still competing every single day I go to practice. Every single kick is important.”

The Jets will play their final preseason game at home on Thursday night against the Philadelphia Eagles (7:00 p.m. ET, WCBS).

NEXT: Joe Douglas Won't Rule Out The Possibility Of Trading For The 'Right Player'