The Memphis Grizzlies, not the Brooklyn Nets, are the much-better suitors for the Phoenix Suns’ No. 6 pick in the 2019 NBA Draft.

The Phoenix Suns’ irrational pursuit of postseason contention is the worst-kept secret in the association. Even with one of the brightest young talents in the NBA (Devin Booker), the Suns have not made the playoffs since 2010 and have finished 15th in the Western Conference for three straight seasons.

That’s not to say they haven’t been trying.

Last season, Phoenix brought in multiple veterans — Trevor Ariza, Jamal Crawford and Ryan Anderson — with the hopes of blossoming into a contender. Well, *checks standings* that obviously didn’t work out too well. But it appears that they’re at it again.

As originally reported by FOX Sports’ Jason McIntyre, the Suns are interested in parting with their 6th-overall pick in return for PG Lonzo Ball of the Los Angeles Lakers. Now, per ESPN’s Jonathan Givony, Phoenix has widened that search and are “open to trading this pick if the right veteran guard is available.”

Which veteran PG would be the best fit for the Suns? ?

With ESPN’s trade machine firing on all cylinders, one of the popular landing spots for Phoenix’s sixth pick is the Brooklyn Nets.

On paper, the deal makes sense. The Nets would receive their first top-10 selection of the Sean Marks era, giving the front office wiz a great shot at increasing his portfolio of exciting young assets.

The Suns would obtain an excellent, experienced point guard to spearhead their offense. Spencer made waves last season as one of the best downhill drivers in the league. Dinwiddie is undoubtedly an upgrade over current Suns PG Tyler Johnson, and he might be the best backcourt counterpart of the Devin Booker era.

However, there is a better suitor. The Memphis Grizzlies, who have dangled franchise centerpiece Mike Conley since the trade deadline, are the team to beat.

When analyzing Givony’s cryptic statement, it’s important to fully digest his wording — namely the word “veteran.” That emphasis alone tells us a lot about what Phoenix is looking for.

Phoenix, a team mostly made up of lottery selections, lacks veteran presence. Outside of the aforementioned Crawford, the Suns’ second-oldest player (T.J. Warren) has only been in the league for four seasons.

Off the floor, the Suns yearn for someone who does the little things for the team; a guy who sets up team dinners, orchestrates the huddle during timeout breaks, and gives pep-talks at halftime. On the court, Phoenix’s need for a veteran star may be even greater. As it stands, the Suns are without a player who can call out switches on defense and quarterback the offense.

Dinwiddie only has 256 total NBA games under his belt. On top of this, he’s never been a full-time starter. While his age (26) may suggest veteran-level experience, his resume certainly doesn’t.

Mike Conley is a different story.

Mike Conley is simply a more well-rounded player. He’s an above-average shooter from basically every area of the floor (per NBA.com): 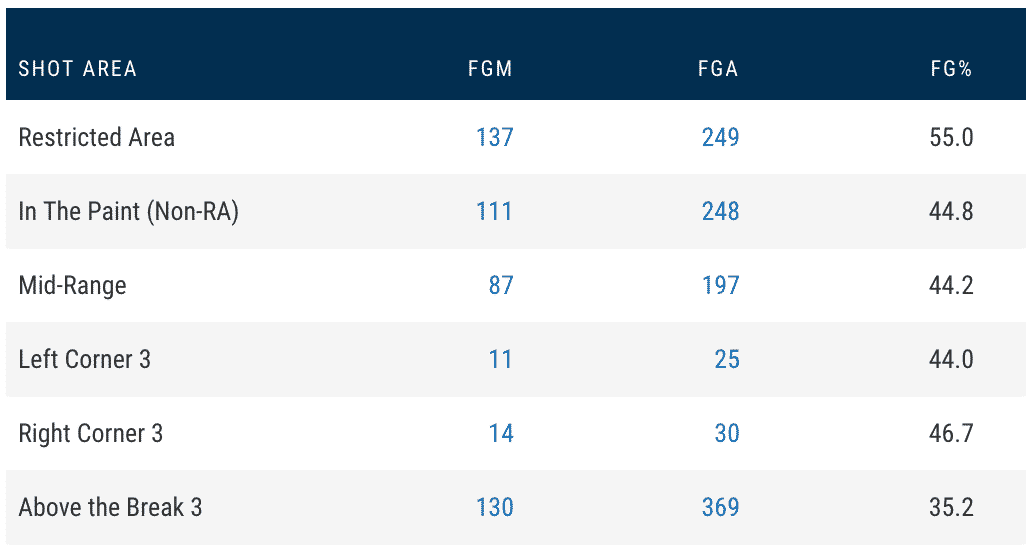 Dinwiddie, while he is sensational near the basket, has some defined holes in his scoring game. As an outside shooter, he could best be described as a “heat check guy.” That three-point stroke certainly waivers depending upon his location (per NBA.com): 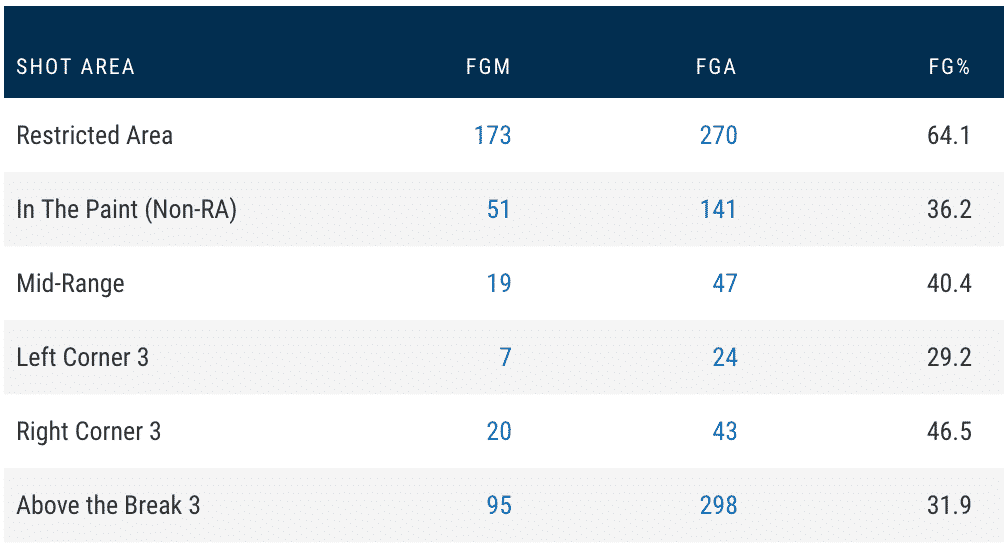 Conley’s playmaking numbers are also better. Last season, Conley recorded the 16th-most potential assists with 12.4 per game. Dinwiddie is found much further down the list at 36th in the league — still impressive, by the way.

Defensively, the two aren’t even in the same stratosphere. Conley is a former All-Defensive teamer who, last season, recorded a 105 defensive rating. Dinwiddie, on the other hand, was responsible for allowing 109 points per 100 possessions; the third-worst defensive rating on the Nets’ roster.

For reference, the difference between Dinwiddie and Conley’s defensive ratings is akin to comparing the Utah Jazz’s second-best defense and the Portland Trail Blazers’ 16th-ranked D. Given that Devin Booker is still figuring things out defensively, it’s best to pair him with a strong defender in the backcourt.

Now, to play devil’s advocate, Dinwiddie is the better option both contractually speaking and age-wise. But while Conley comes with a great deal of sticker shock (he’s due $67 million over the next two years), his deal comes off the books in 2021 at the latest. Phoenix is a team that has never attracted any major free agents.

Furthermore, given that the average age of the Suns’ roster is 24.5 years old, it’s highly unlikely that the Suns are a playoff team before 2021. With little chance at contending on the horizon, the Suns need to spend money somewhere. So why not grab the near All-Star-level PG with playoff experience?

Dinwiddie would make sense on the young Suns roster, and that’s exactly my issue. He’d essentially be more of the same — inexperienced. Conley would break the status quo in Phoenix. Even if he declines in year two, he could still provide leadership to an otherwise listless franchise. He’s already proved his worth in Memphis as a culture changer.

NEXT: Jimmy Butler Is The Superstar The Brooklyn Nets Have Yearned For