Pressure, pressure and more pressure. Cut from the Buddy Ryan and zone-blitzing scheme cloth of the early 1990s, the New York Jets defensive coordinator is an attacking defensive mind.

The man is as aggressive as it gets.

A decade ago, around the same time Rex Ryan shocked the league with his aggressive Jets defense anchored by Darrelle Revis on the back end, the attacking defensive mind was still living large. Today, with the three-step drop and edge-pressured tactics like the jet-sweep ruling the roost, the aggressors often stump themselves.

It remains an issue Williams is currently facing.

Relenting 393 yards per contest, the Cleveland Browns finished 30th in total defense a year ago. The same defense finished 21st in the league in the state that really matters, points against, with a cool 24.5 per game.

There’s no question Gregg Williams is still an excellent defensive mind. There’s also no question some of his concepts are currently being challenged by the modern ways of football.

One such concept is the overload blitz, an attacking scheme Williams often leans on during the crucial third-down situations over the course of a game. Against his new team, the Jets, in Week 3 last September, he pulled off an interesting variation of an overload pressure against Sam Darnold. 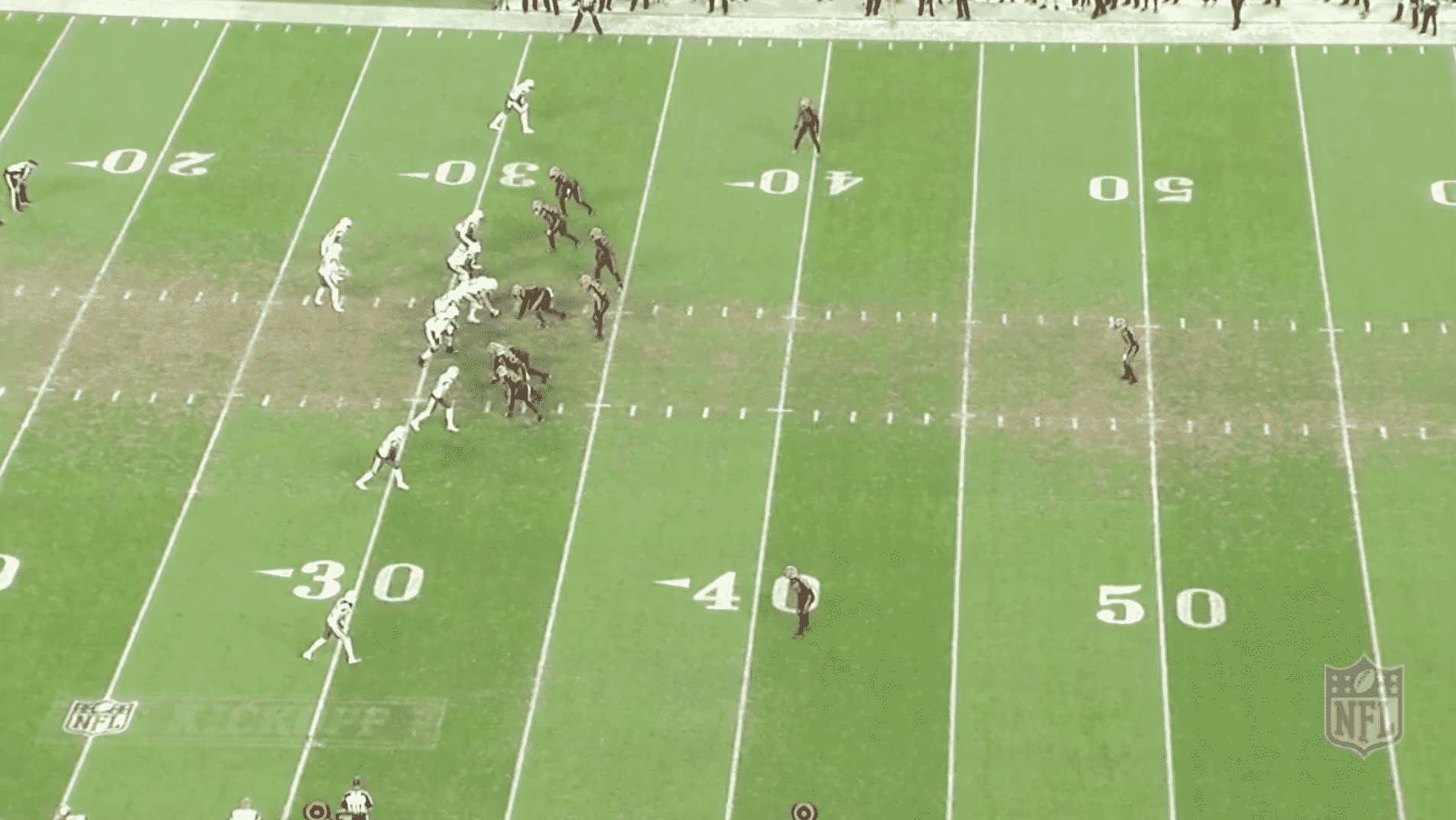 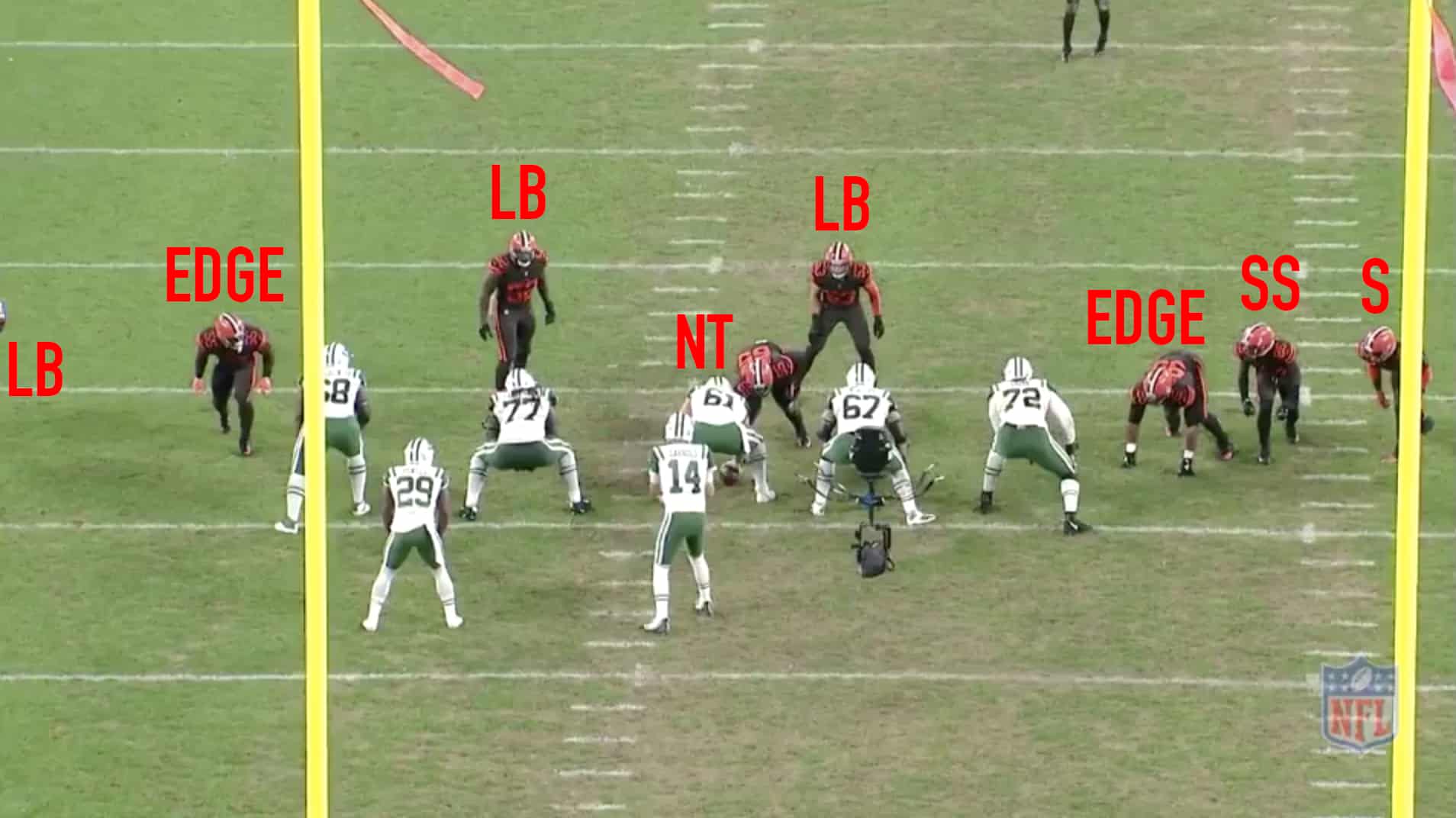 The 3-3-5 personnel out of the nickel isn’t out of the ordinary. What is, however, is the placement of the personnel.

Not one, but two safeties are lined up to our right side, the strong and wide side of the field. Only one interior defensive lineman is on the field in this look.

Here’s how it would look with Jets personnel: 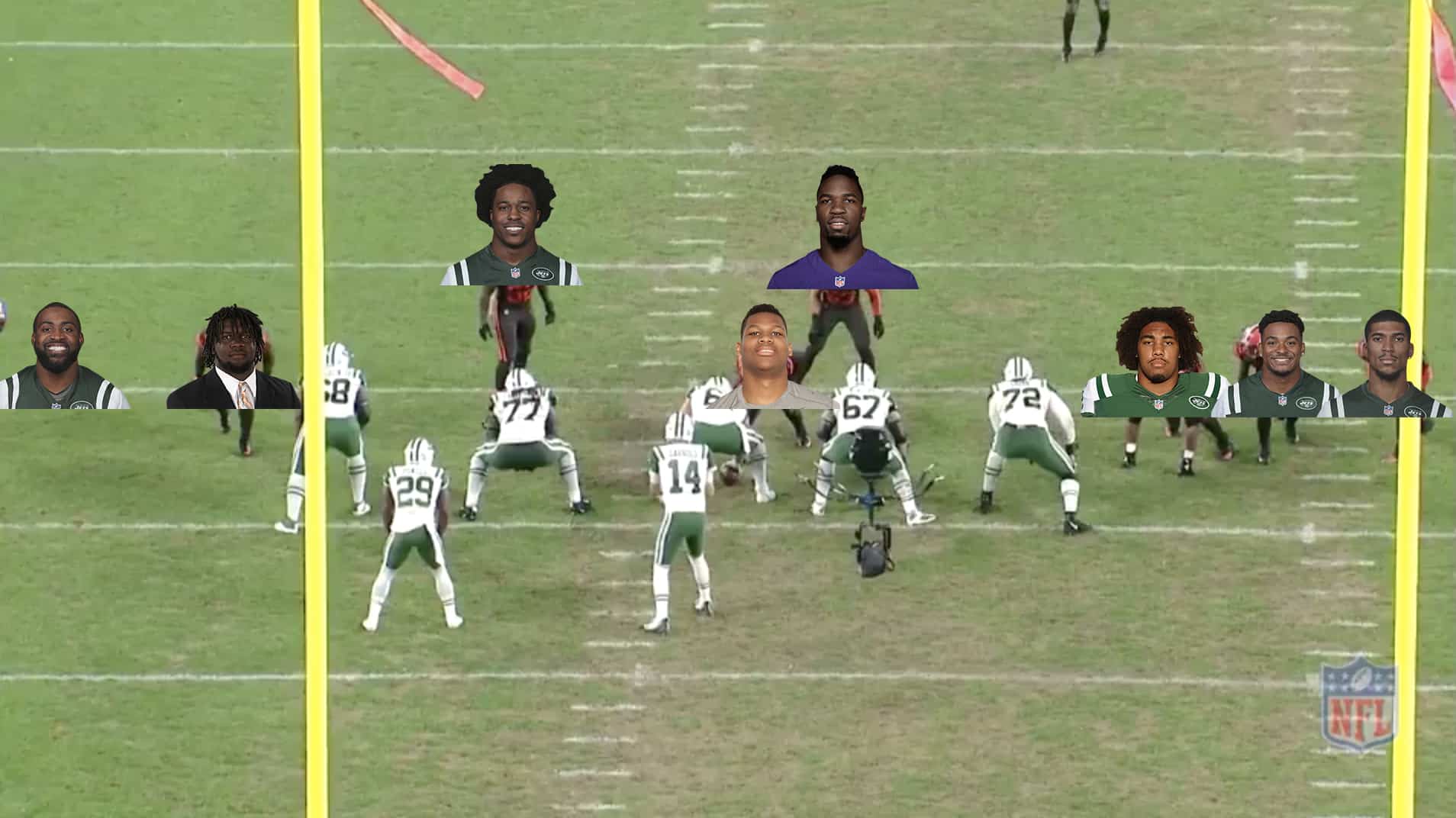 This specific look isn’t a great one for Jets’ personnel.

New York is studly along the interior line yet this look would rather feature just one interior big man. In order to get both Quinnen Williams and Leonard Williams on the field at the same time, the latter kicks to the strong-side edge where Myles Garrett is featured within the actual play. 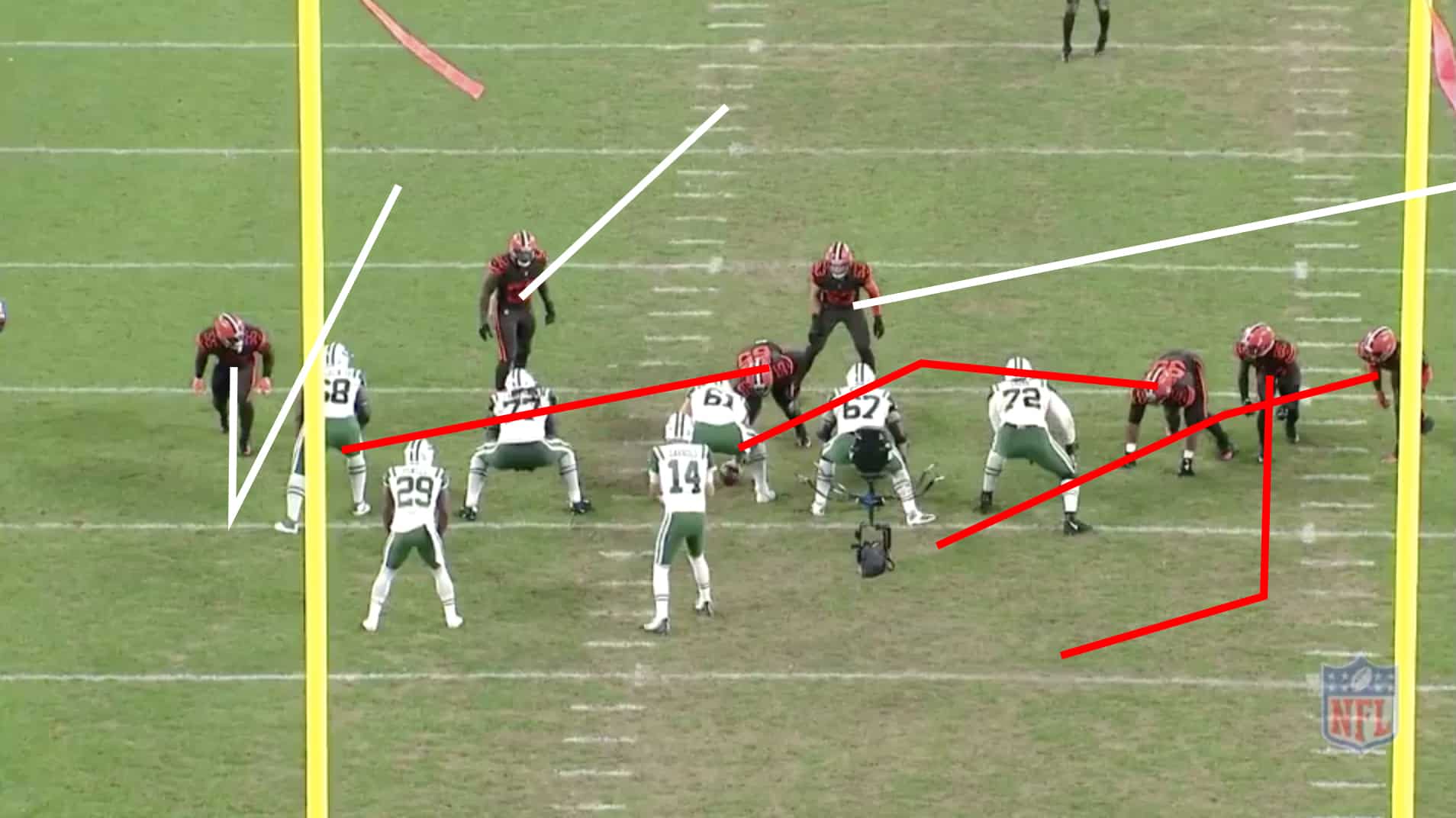 There are two real pass-rushing matchup opportunities on the design. First, the strong-side edge (Garrett/Leo) steps hard to the right in order to use his quickness against the weaker pass-protector along the offensive line, the center.

The other opportunity comes from the double safety rush. For New York, it would be Jamal Adams and Doug Middleton (by default) or better pass-rushing corner (as Middleton is better served as a centerfielder like Marcus Maye). Twisting the two and using them to replace the strong-side edge attempts to create confusion.

Unfortunately for Quinnen, the nose tackle, he basically serves as a decoy in this scenario. His lone goal is to move the center to the offense’s left.

The setup is interesting. It’s key not to tip a hand prior to the snap. Although the strong side deploys one extra player, the difference features two safeties versus a lone linebacker (on the weak side). Therefore, the protection scheme understands the strong side is more of a threat but not by much. 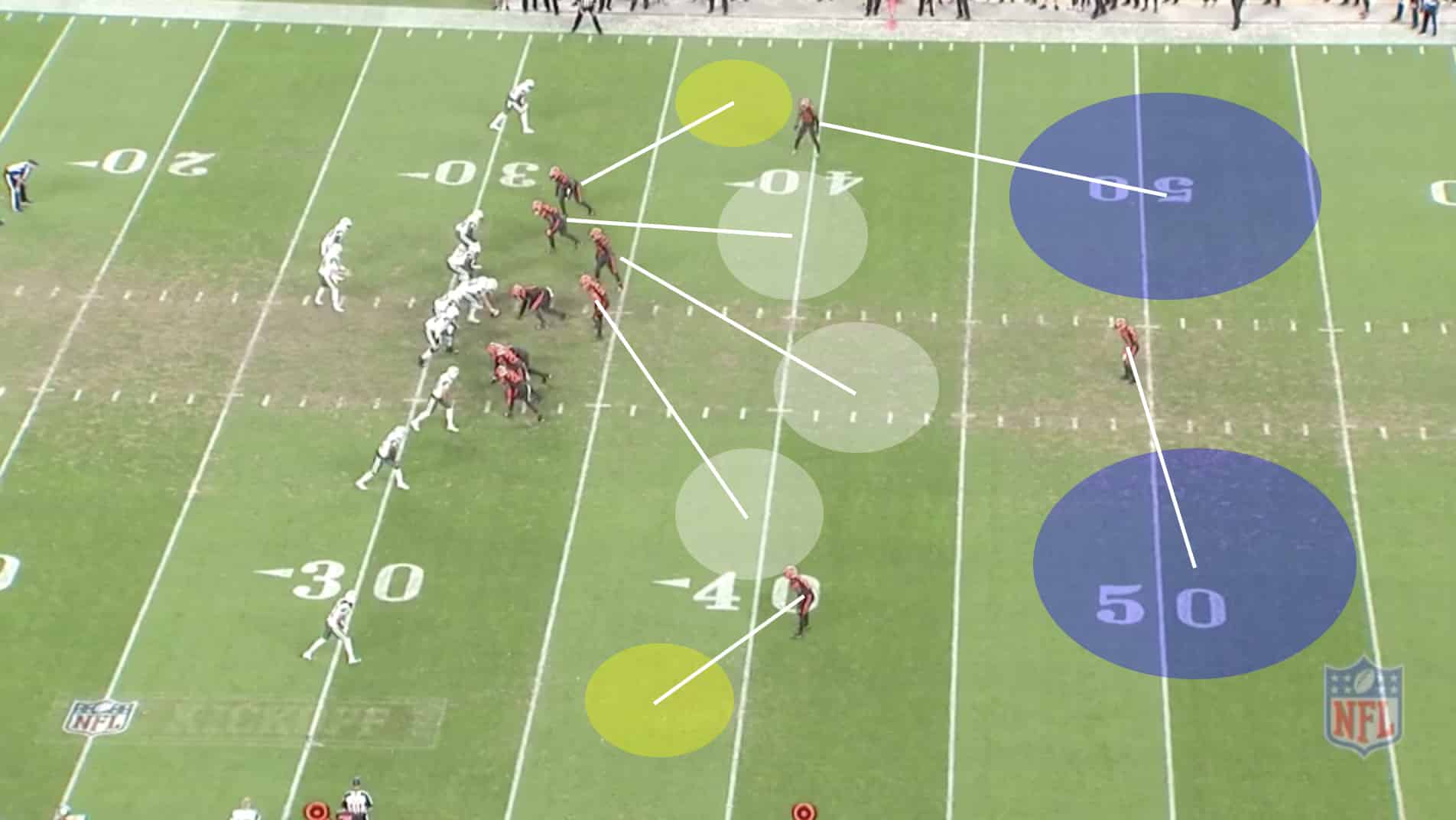 We’re discussing Gregg Williams overload pressures yet what’s fantastic about this play is that it’s not even a legitimate blitz. Only four players are rushing the quarterback with seven in coverage.

The offense would have immediately been KO’d if the nose tackle successfully distracted the center to the weak side. It didn’t happen despite the nose tackle’s better effort to cross his face. But to (Gregg) Williams, that’s OK. He still has his best pass rusher (Garrett) matched up one-on-one with the center, rather than a better pass-protecting tackle.

The right guard can’t help on Garrett due to the double safety rush. Though Brian Winters is out of position just a bit, he still has time to recover.

The weak-side edge, who would be Jachai Polite or Jordan Jenkins for the Jets, is thrust into coverage after a one-step rush bluff.

Additionally, Leonard Williams doesn’t have to be the focal point on the play. Williams can opt for Polite or Jenkins as the one-on-one rusher against the center. On this play, however, it makes no sense with the weak side edge dropping into coverage; Leo should not be in a position to drop on a regular basis save for the occasional surprise zone blitz.

Garrett destroys the center en route to the third-down sack. Better yet, the running back, who was left in as a sixth pass blocker, was so enamored with the double-safety rush that he immediately took the strong side threat, leaving the one-on-one unattended in the middle.

Notice the hard movement of the play and where it’s coming from. Williams overloads the strong side, the trips side, while keeping faith that his weak-side cover players will time it correctly and get over in time.

The movement also baits the quarterback into thinking space is there to his trips side when it’s really not.

Again, this play isn’t even a blitz; it’s an exotic four-man rush that gets to the quarterback in a heartbeat.

Based on the end result, the top edge rusher is the star of the show. Myles Garrett flat beats Spencer Long on the mismatch, the entire point of the design. The Jets don’t employ a dynamic edge man like Garrett. Leonard Williams, Jachai Polite or Jordan Jenkins would take on this specific play-design role.

What’s tremendous about the play is the moving parts. In a Williams defense, moving parts all need to work together in a perfectly-timed fashion. Not only does the defense pull off an overload four-man pressure with two safeties rushing, but they also cover their behinds on the strong side of the field while busting it from the weak side. Had the protection held up, the coverage was still present.

This double-edge safety overload four-man pressure coupled with a Cover 2 roll is a tremendous example of a Gregg Williams design against a 3rd-and-long situation.