The results are in: the New York Jets depth chart is officially updated.

After six picks in three days, general manager Mike Maccagnan added several solid bodies to the team’s roster. Some will start immediately, others will plug into key special spots and some will fail to make the final 53-man cut in late August. 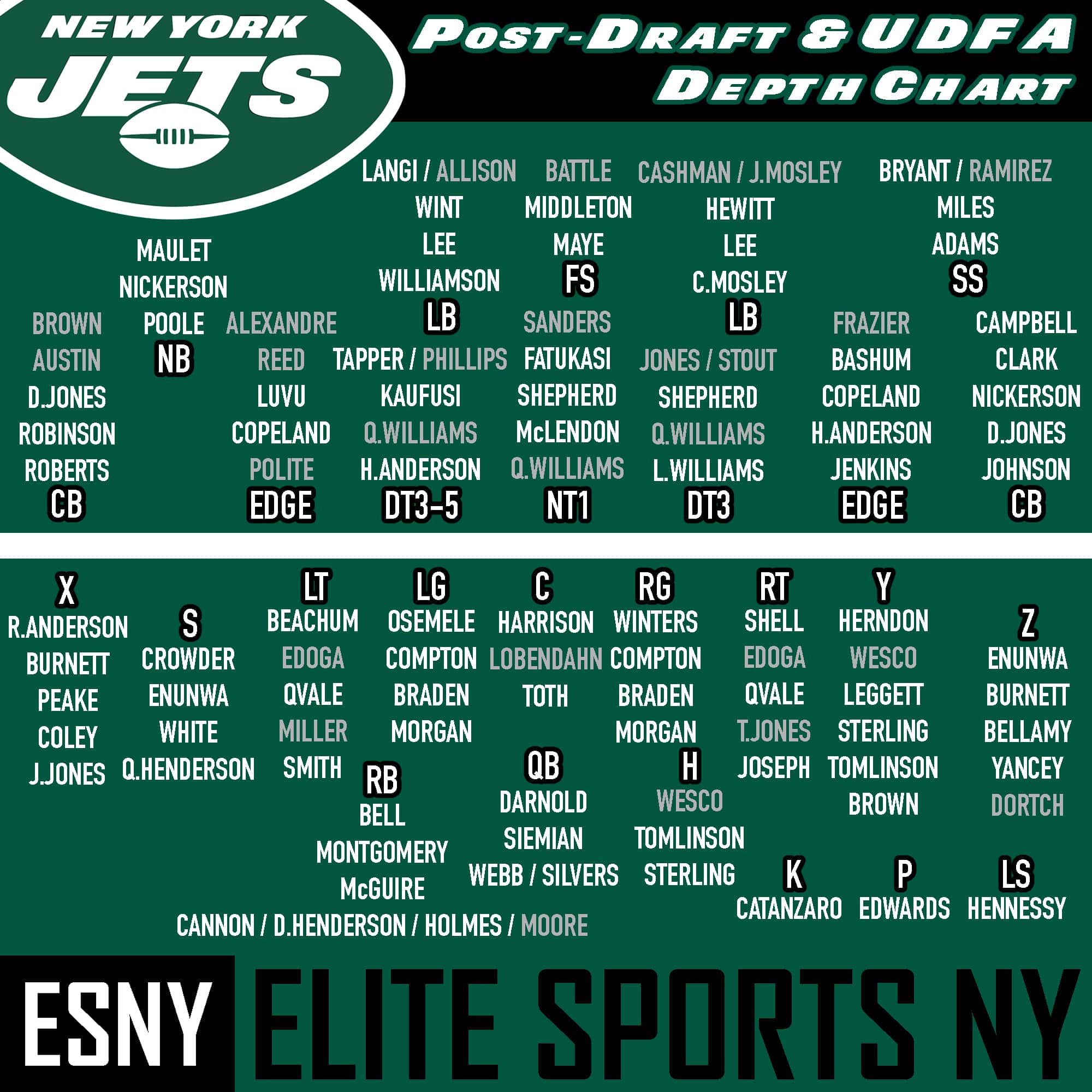 There isn’t much to complain about here. Perhaps a more accomplished backup quarterback could be on the wish list, but let’s face it: if Sam Darnold goes down, little else matters.

The Jets are Sam Darnold’s team and that’s that. The USC product represents the hopes and dreams of an entire organization and fanbase.

From weakness to strength, the Le’Veon Bell signing immediately changes the Jets running back fortunes.

Due to the Michigan State product’s versatility, the 3rd-down back conversation doesn’t really exist. Bell is a workhorse who represents the regular, goal line and 3rd-down back all wrapped into one.

Ty Montgomery and Elijah McGuire account for versatile backups who can also catch passes out of the backfield. Trenton Cannon can line up in the slot at times as the jet-sweep option but doesn’t serve as a legit pass-catching threat.

The depth isn’t great but Quincy Enunwa, Robby Anderson and Jamison Crowder are more than enough for Sam Darnold (as long as the O-line is productive).

Crowder is the undoubted slot man. Enunwa might actually be better, but as the starting Z, a back-up slot is still needed. Tim White and undrafted free agent Greg Dortch will each get a crack.

If fourth-round Trevon Wesco turns out to be a player, the Jets tight ends are extremely healthy. That second vertical-threat Y is a must behind a burgeoning Chris Herndon.

Adam Gase doesn’t carry a fullback. He never uses a fullback. This means his tight ends serve as fullback, or H-back, when the set calls for it.

Eric Tomlinson is the de facto No. 1 blocking tight end at the moment. Can Wesco or Neal Sterling beat him out?

Third-round choice Chuma Edoga has to turn out to be a player. The offensive line requires competitiveness in July and August and a third-round spot must come through.

After Edoga, there isn’t much. Brent Qvale is better served as a guard. Undrafted free agent Wyatt Miller is a man to watch.

Kelechi Osemele slides in for James Carpenter as the only change in the starting lineup. Tom Compton is an excellent third guard who adds depth.

The weakest position on the roster is center. The Jets would be greatly risking the health of the offense if Jonotthan Harrison enters as the starter. A miracle is needed in the form of undrafted rookie Toa Lobendahn.

Quinnen Williams, despite his 300-pound frame, will be the Jets starting nose tackle. If he turns out to be a little too small for the base, he’ll slide over to the 3-technique and allow Steve McLendon back in the role.

The defensive tackle (3-to-5 technique) spot is by far the Jets deepest position on the roster.

Other than center, EDGE represents New York’s thinnest area. A lot is riding on Jachai Polite’s performance. Henry Anderson can slide to the outside in a pinch but it’s never a good idea to place a 300-pound man in space on the edge.

Trumaine Johnson isn’t a No. 1 corner. Darryl Roberts is thrust into a starting role when he’s served better as a nickel or dime man. Brian Poole is a solid nickel. Corner needs a ton of work.

An NFL team can’t do much better than Marcus Maye and Doug Middleton as a free-safety duo. Middleton in during big dime situations as the other deep-half safety is a perfect scenario.

Jamal Adams is the best safety in the NFL. He’s what matters at this spot.

The Jason Myers loss in exchange for Chandler Catanzaro is a puzzling one for the Jets. Lac Edwards is an average punter and Thomas Hennessy is a plus as the long-snapper.

What’s most important is the Jets are set at quarterback. It’s the first and most critical aspect for any NFL team in today’s league.

In the end, the New York Jets 2019 fate will be determined on how much the O-line and four-man conventional pass rush improves. It always starts in the trenches.