Constructing Adam Gase staples (formations and plays) with the current crop of New York Jets personnel is an exercise in anticipation.

The zone-rushing attack, the three-step short passing game—it’s what an Adam Gase offense breathes. Don’t be confused, though; Gase isn’t limited to broad system taglines. He’ll mix in man-on-man rushing concepts while flipping the gameplan on its head if things aren’t moving swimmingly.

Like all offensive play-callers, the first-year New York Jets head coach showcases staples. It’s time to place the Jets offensive talent within these staples with the NFL Draft right around the corner. 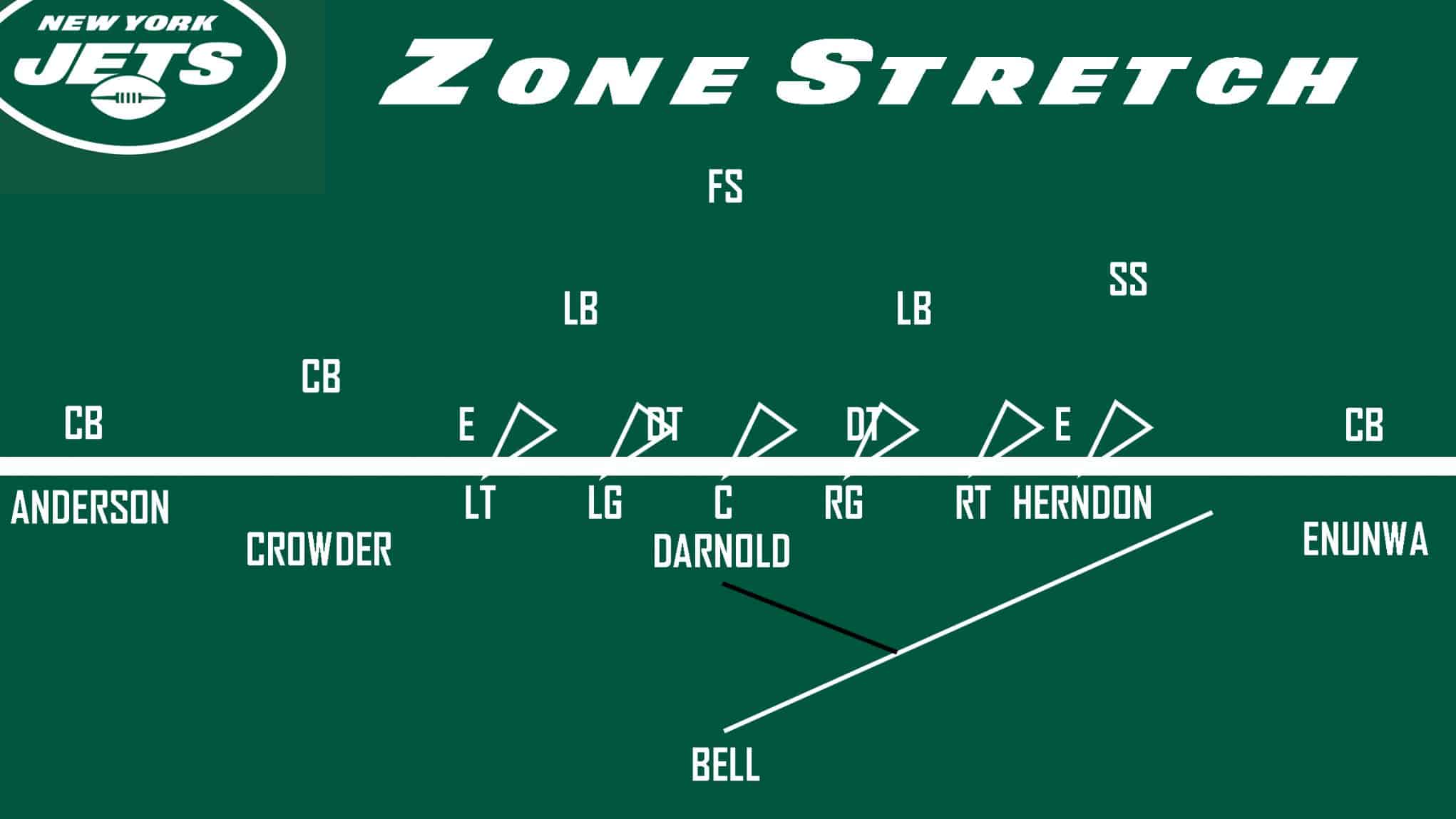 We start simple. Out of Gase’s base 11 personnel, the singleback zone stretch features a versatile offensive line double-teaming the point of attack and looking to get to the second level with Le’Veon Bell targeting the edge with the room to cut back at any turn.

The Jets fan should be used to this concept. Rick Dennison and Jeremy Bates ran it to death during the 2018 season. 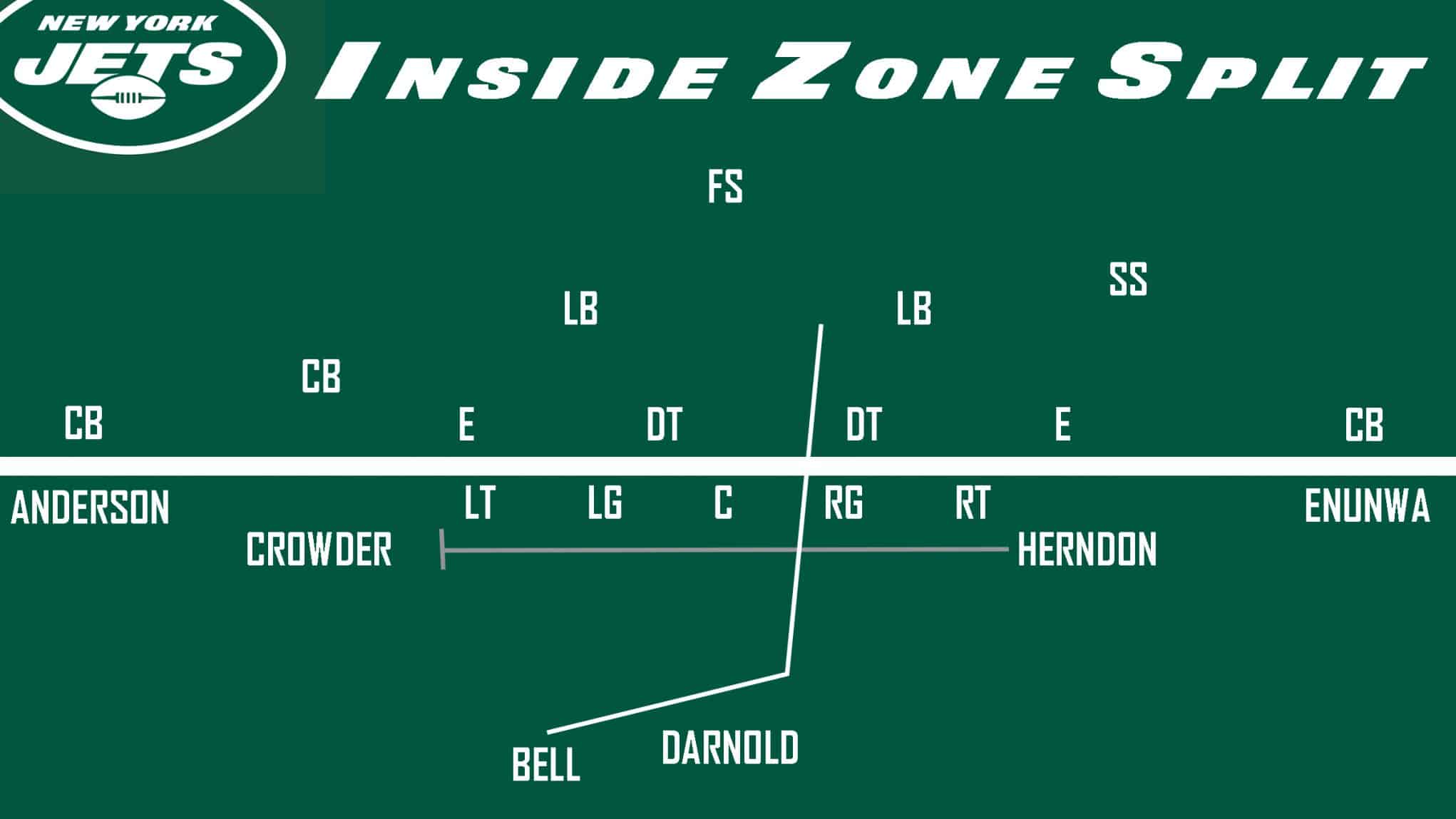 Now to the shotgun and one of Gase’s personal favorites out of the zone-rushing attack, the inside zone split.

At times, throwing Eric Tomlinson in at tight end in favor of Chris Herndon is the way to go on the ground. It, unfortunately, tips the hand, but offers greater rushing production.

Like the stretch, the inside zone split allows for a great one-cut experience for the back. 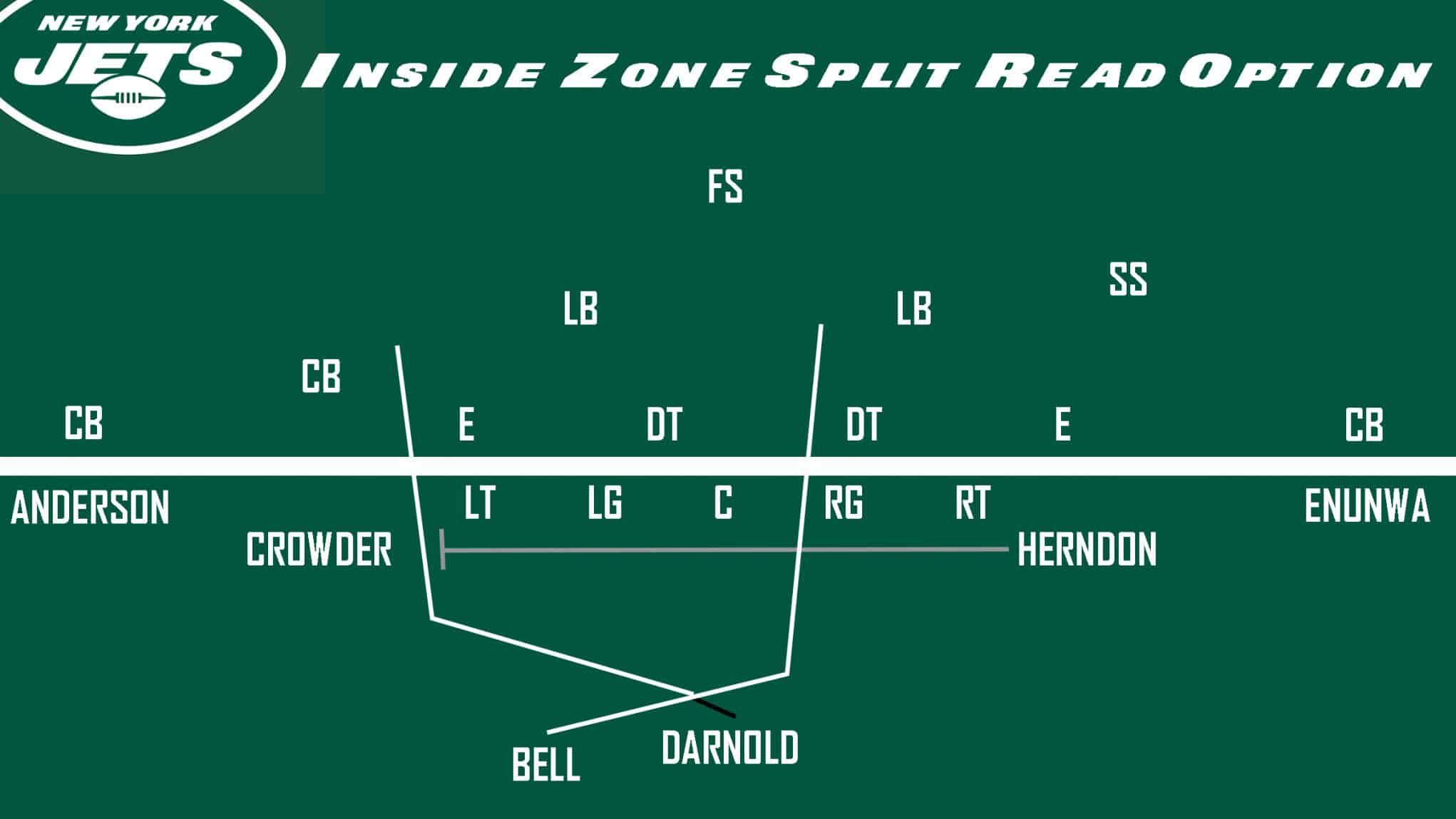 There are many varieties but Gase loves running his read option off the inside zone split action. 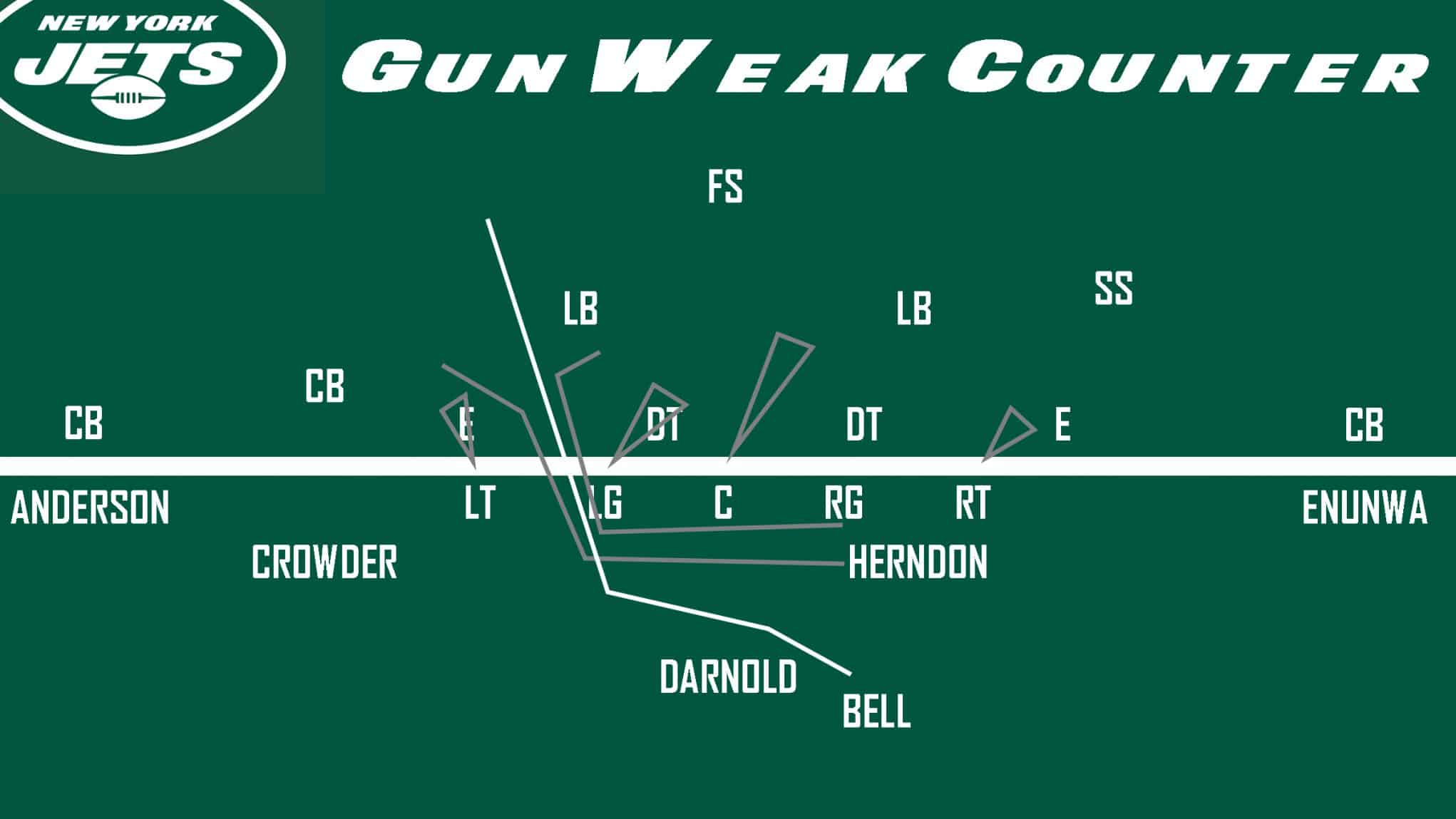 Bell, the most patient running back in NFL history, thrives when he’s granted time. The way he sets up blocks and plays cat-and-mouse games with second-level defenders forces slower-developing plays like counters, draws and misdirections to own the offense.

Here, Herndon is lined up as the H-back to get a jump on the pull with the right guard, both of whom are leading the way for the All-Pro workhorse. 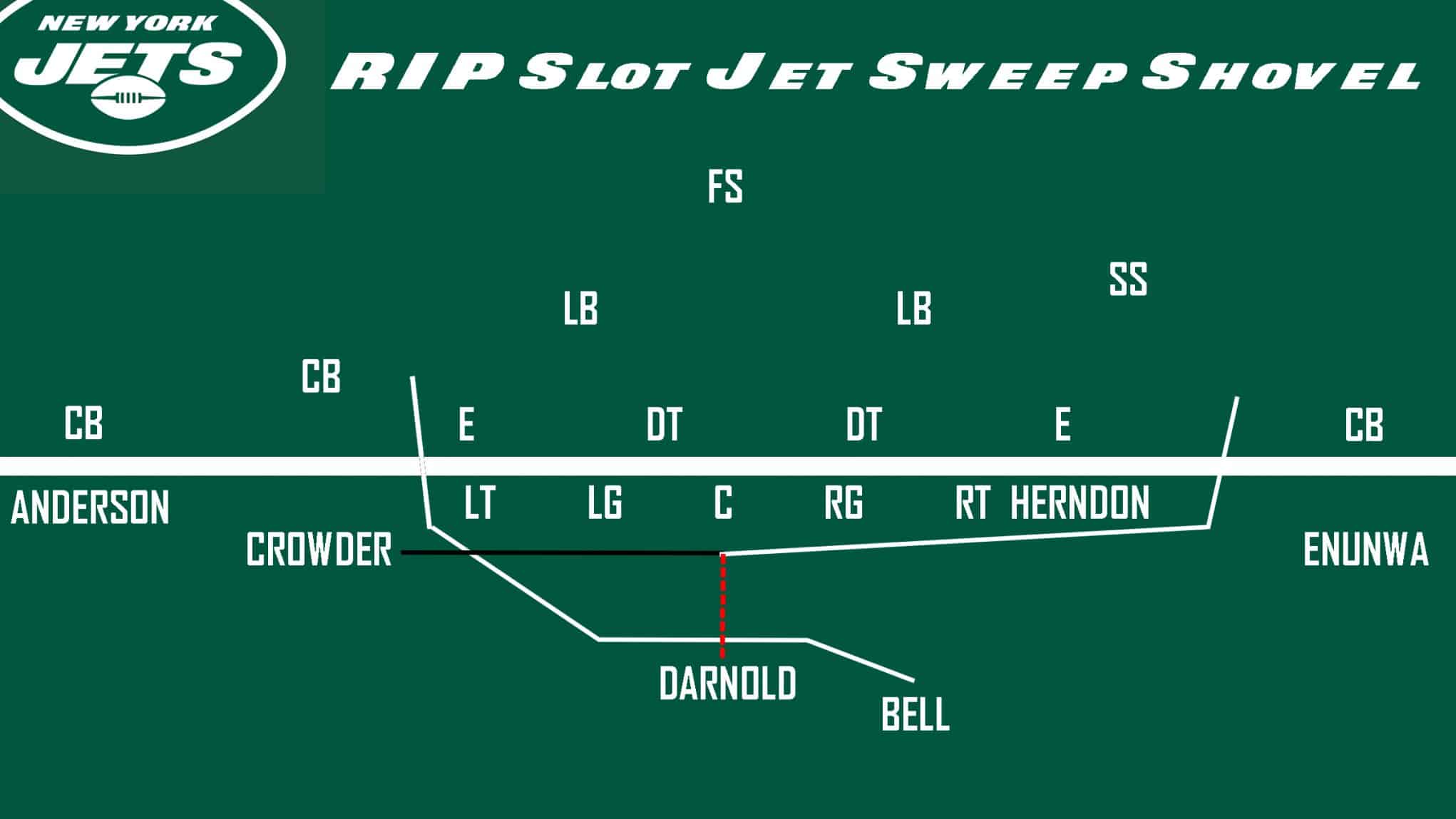 It’s X-factor time or, in other words, Jamison Crowder‘s play.

The Jets new slot man isn’t just a pass-receiving wideout; he’s the offense’s X-factor who’ll motion more than any weapon and in today’s NFL, the jet sweep rules the roost.

This play is something Gase will run. Most offensive minds have adopted the look via Andy Reid‘s Tyreek Hill dominance in Kansas City. Throwing the running back in one direction contrasting with the jet sweep motion puts an immediate halt to the defense’s instinct. The second level simply can’t get a jump on which way the play is going.

Expect many variations of the jet sweep featuring Crowder under Gase in 2019. 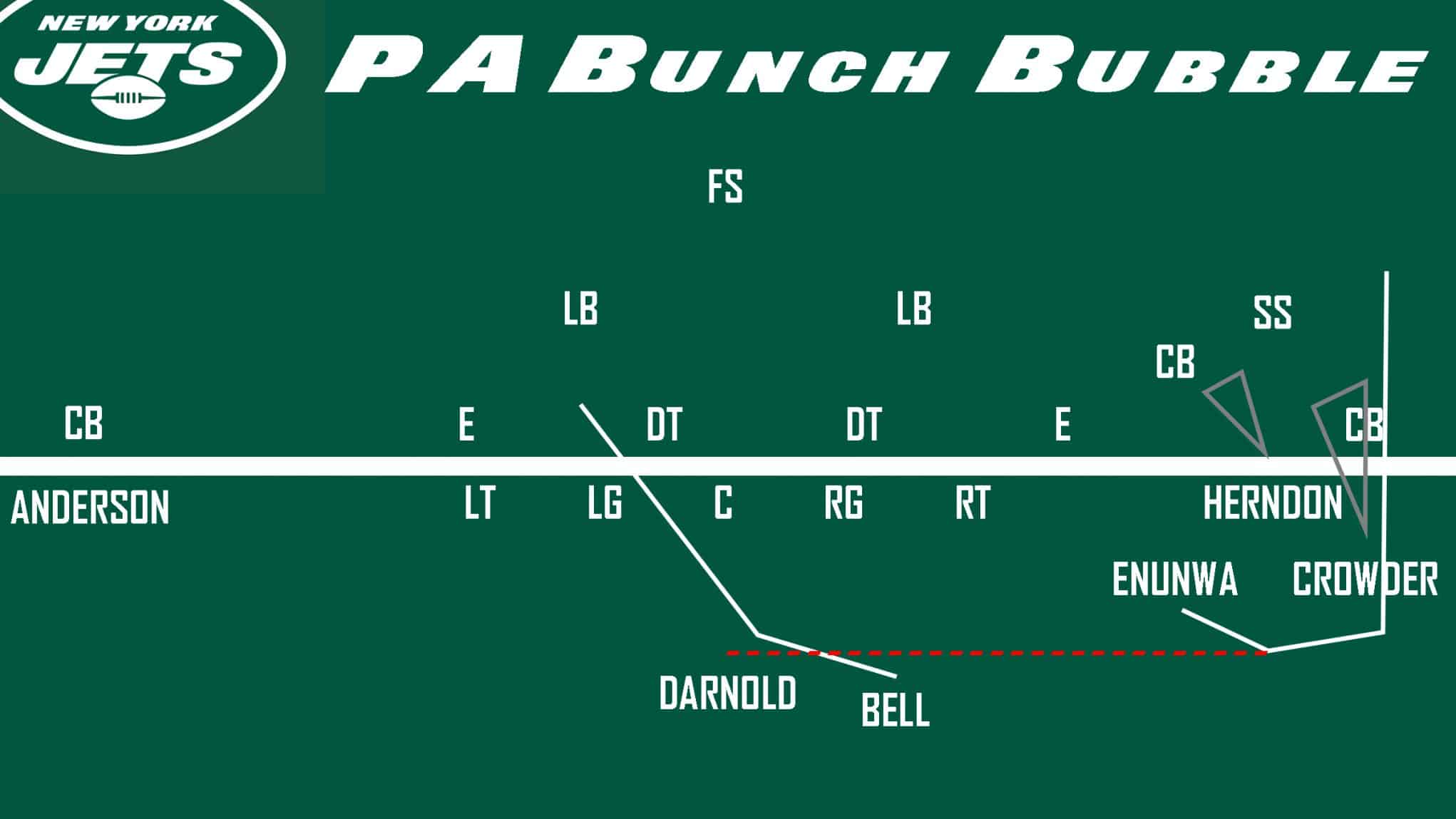 Another potent Gase staple is the bubble screen. In Miami, Danny Amendola was the bubble king (carrying it over from his New England days).

Again, there will be many variations, many formations and looks to run the bubble screen. The most important takeaway is that Crowder and Quincy Enunwa will serve as the top two targets within the concept.

It’ll usually be run against zone coverages when the weaponry outnumbers the defenders three-to-two or two-to-one. For standardized purposes, our defenses are set up as single-high man across the board on the graphics. 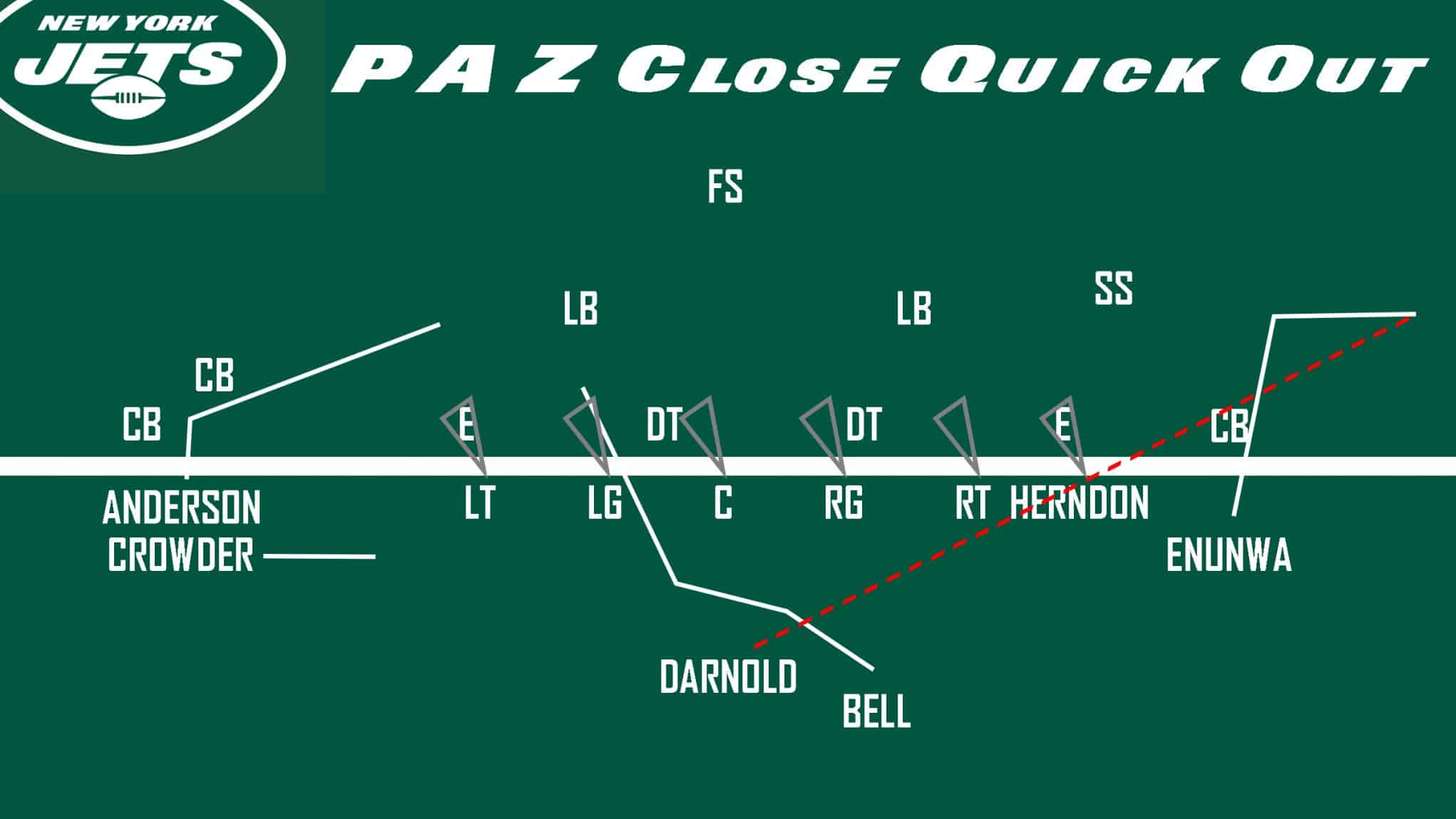 More Enunwa running his underneath possession stuff shines brightly on this play.

The key to the play isn’t necessarily Bell’s inside zone play-action, rather the entire offensive line running the zone-blocking motion to the left, the opposite side of the quick out.

Forcing the defense to flow one way only to throw the quick out on the three-step drop to the other side is the key to this Gase concept. 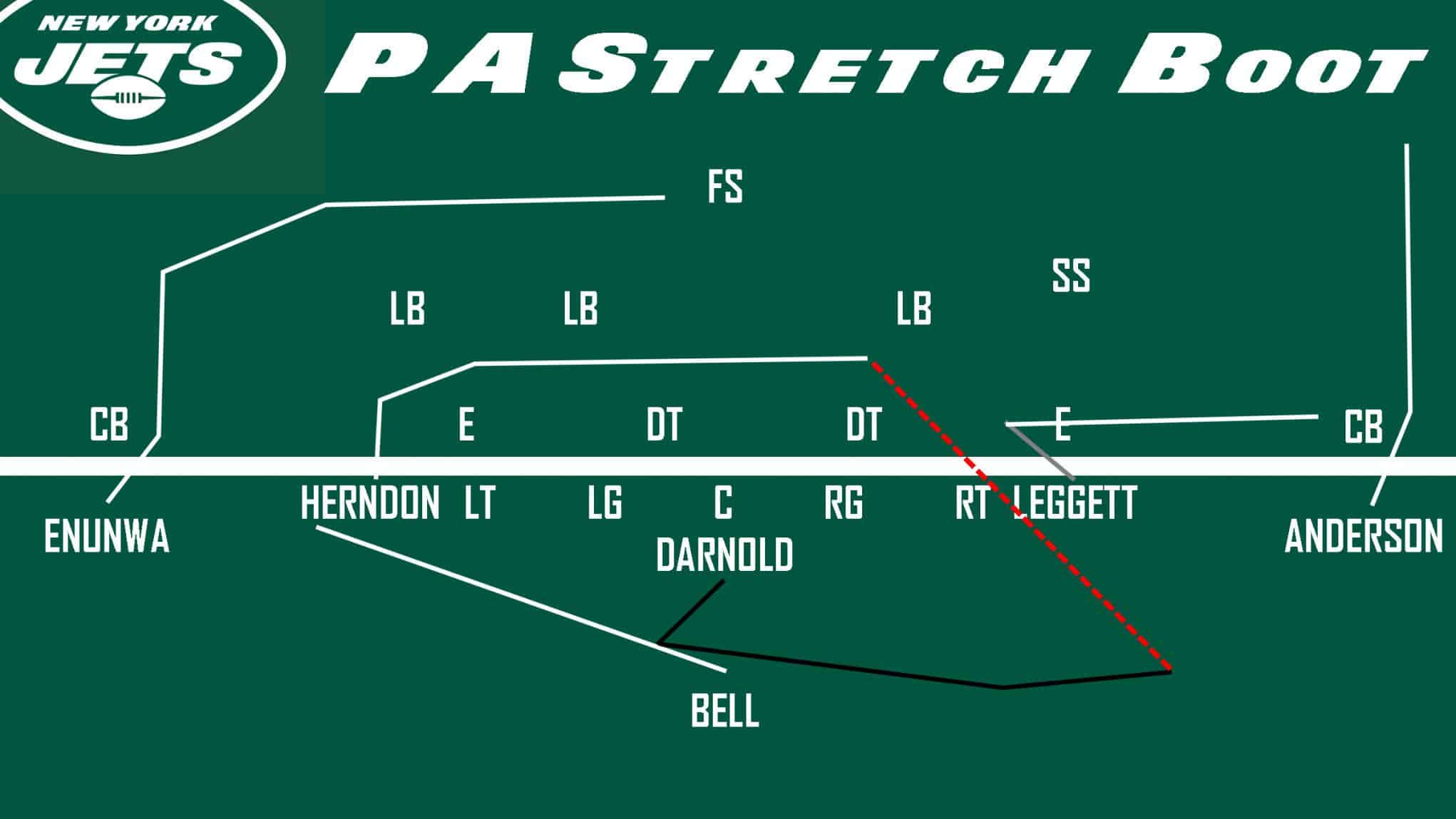 Perhaps the most recognizable play-action within the zone rushing scheme is the stretch boot.

The goal is to move the entire offensive line one way while sprinting out with the quarterback and the action in a contrasting style. This is Chris Herndon territory. Due to his versatility as a vertical-threat tight end, he can run any route required. 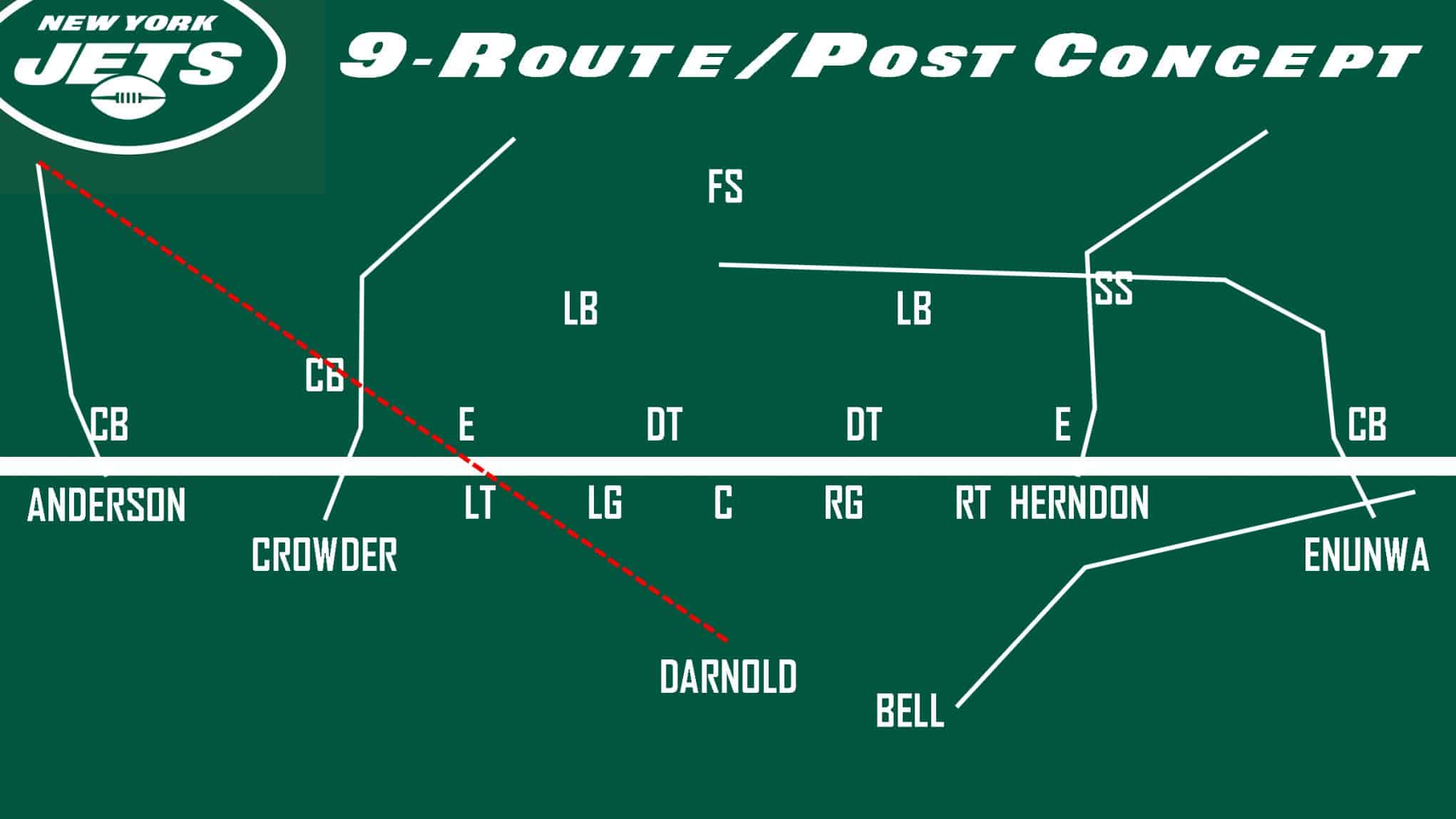 Putting pressure on the single-high safety is what the 9-route-post concept is all about. It’s a way to take a Robby Anderson shot down the sideline.

There are a number of ways to find Robby loose on a go route. The go-post concept works best against a straight Cover 2. It forces the play-side deep-half safety to choose between the go and the post (when the cornerback abandons depth for the flat). 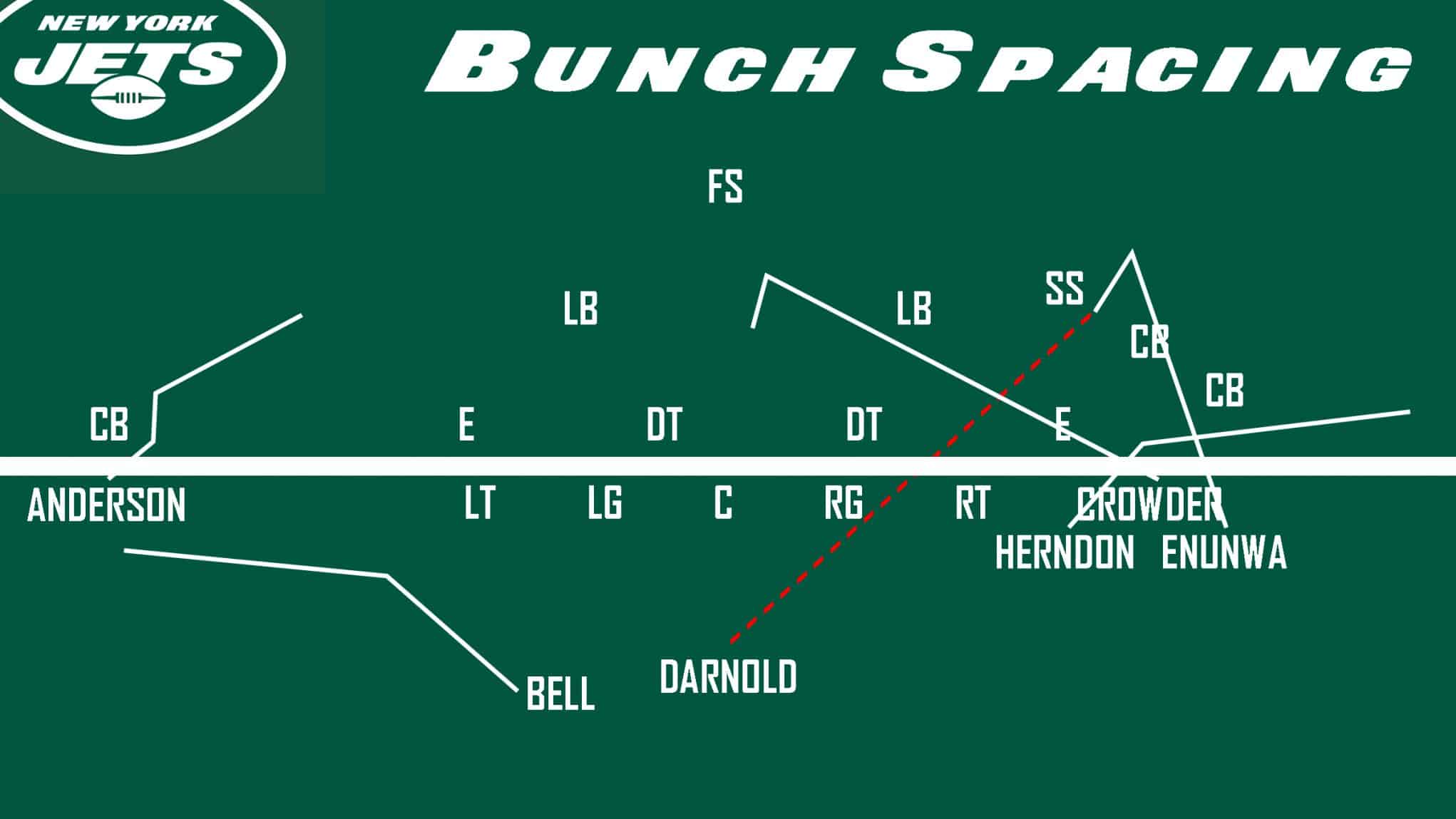 Spacing is one of Gase’s many three-step concepts. It’s used as a quick-hitting play near the goal line, in a 2-point conversion scenario, or when converting a 3rd-and-short is essential. 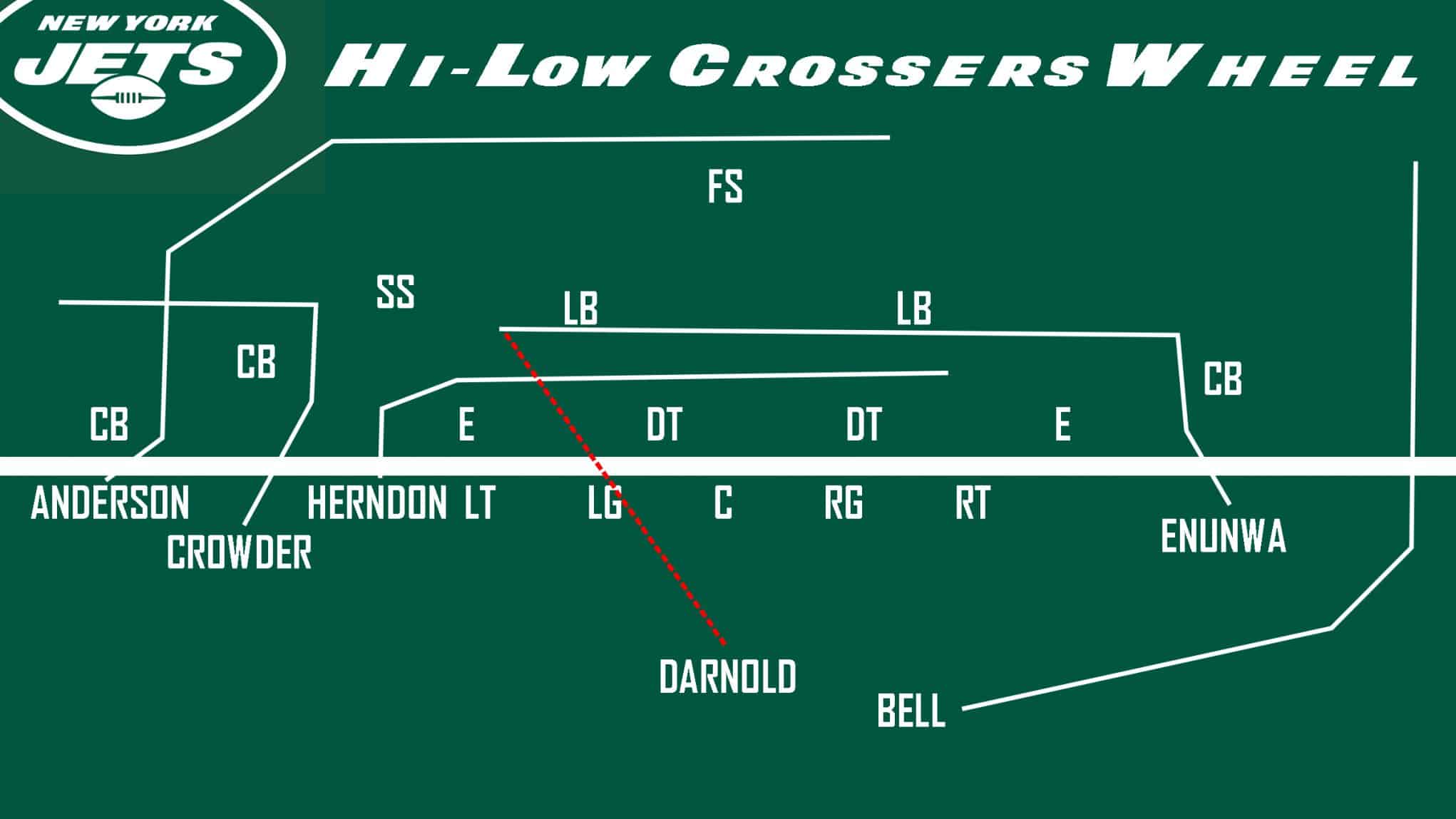 This play showcases two concepts wrapped into one: the hi-low and crossers.

In addition, Bell on the wheel accounts for the wild card route that’s devastatingly tough to defend. 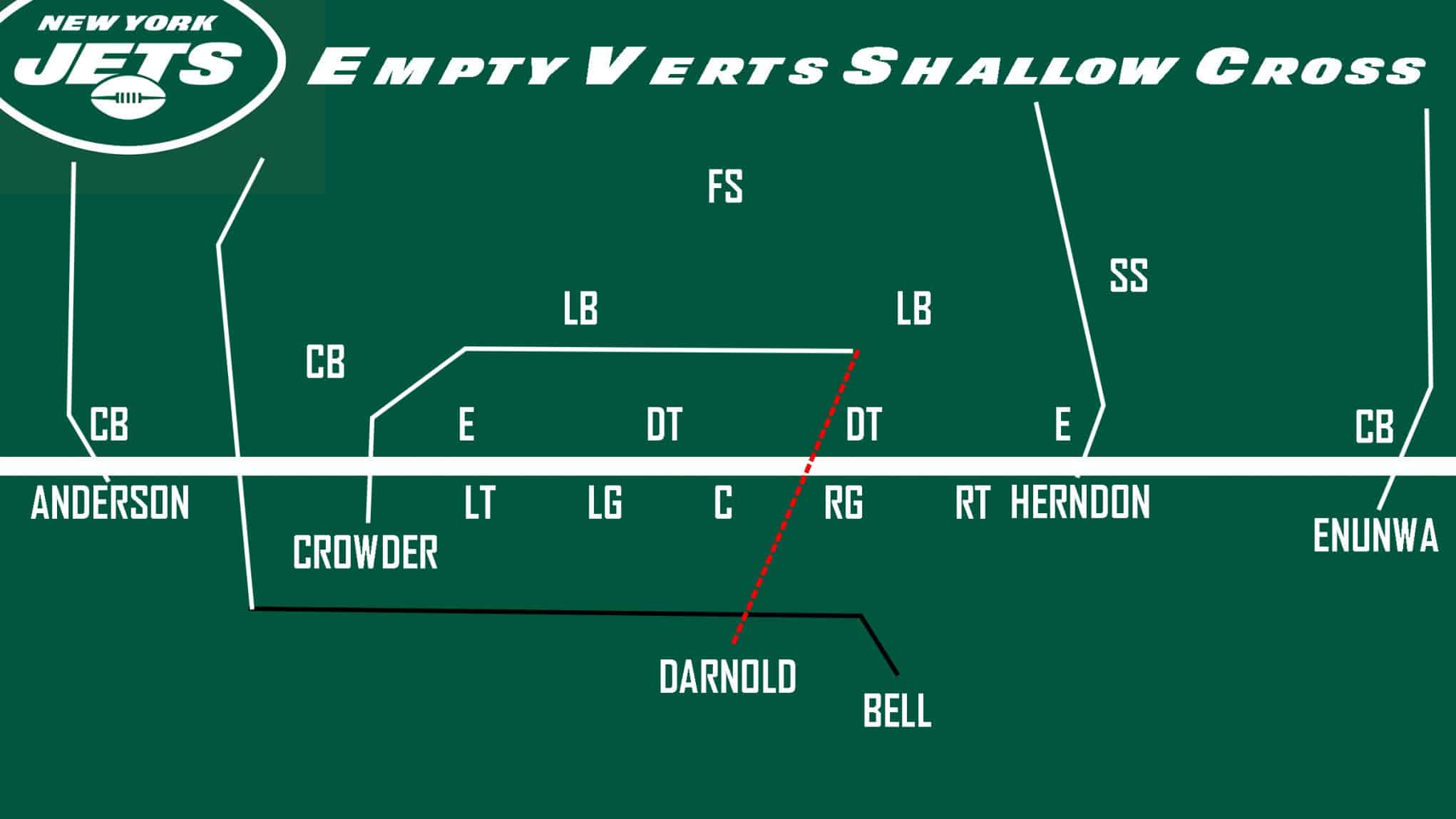 Crowder and Enunwa will star within this concept. Running deep verts with the shallow cross attempts to isolate the underneath weapon.

Anderson can represent the underneath man as well but it’s served better when he’s running his customary deep design.