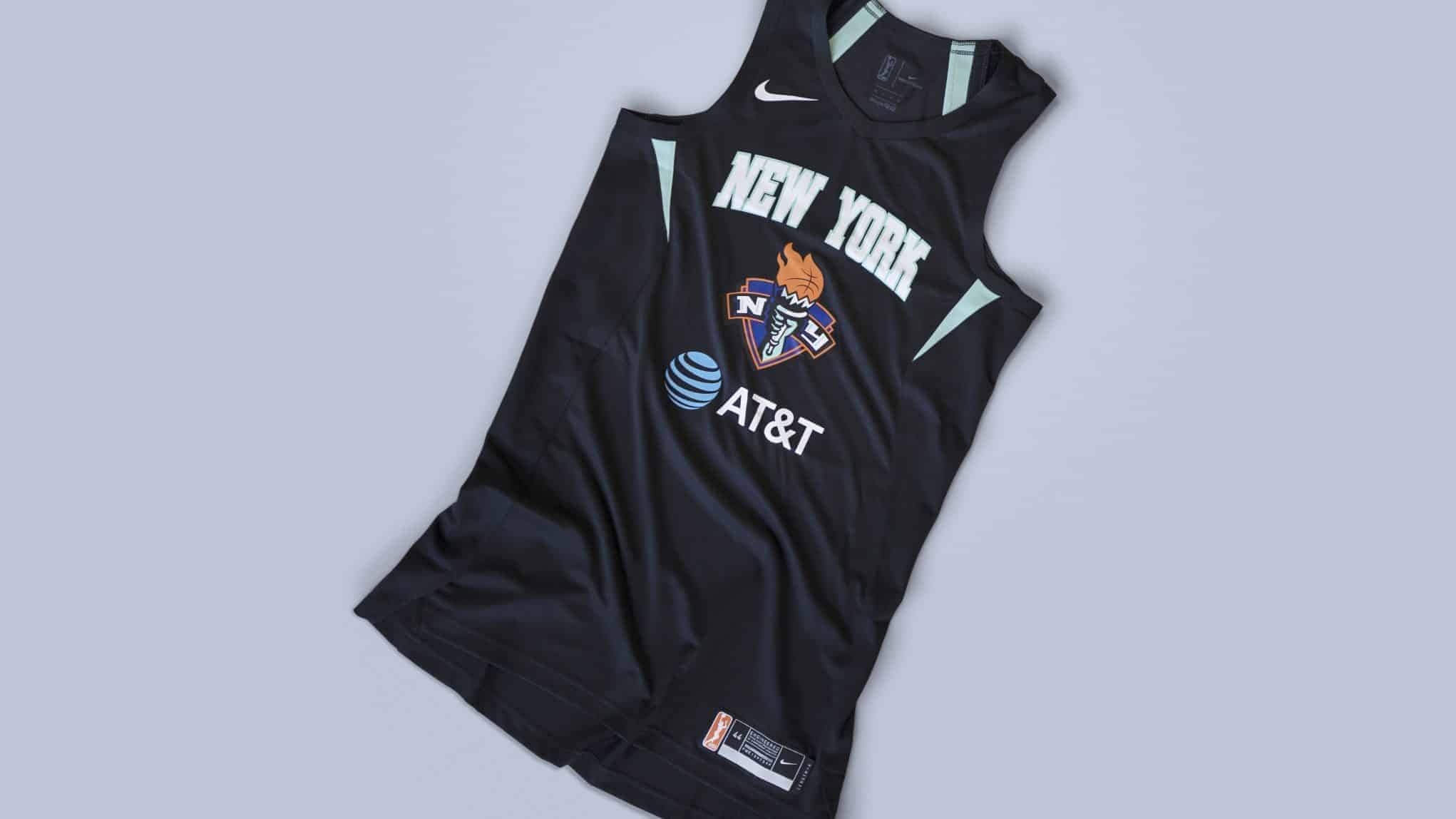 The WNBA’s dozen squads each unveiled new looks prior to Wednesday’s draft. The New York Liberty’s threads are unique in more ways than one.

The New York Liberty are going into their next generation with a timeless mixture of old and new.

Along with the rest of their WNBA counterparts, the Liberty showed off a new aesthetic package headed into Wednesday night’s league draft. Held at Nike’s New York headquarters on Sixth Avenue, the selections were preceded by several events, including a uniform showcase.

The new league template eschews front jersey numbers, replaced by a team logo. The Liberty maintain their traditional colors of black and aquamarine blue, which have been named the team’s “Statement” and “Icon” jerseys. Numbers are retained on the back of the jersey, going with black numbers on the Icon version and white on the Statement set.

“For the 2019 season, we took team logos and put them prominently on the front of the jersey, replacing the number,” NBA Director of Identity Outfitting and Equipment Keri Lenker explained to ESNY. “The number’s still on the back, but we really did that in an effort to ensure that team branding was consistent across all our uniforms. As we are a growing league, we wanted to make sure that brand awareness was growing as well.”

New York’s new threads are somewhat unique in that they forego a sponsor name on the upper portion of the jersey. In its place with the team’s nickname in a special script, the lower case “i” in “Liberty” replaced by a torch whose flames resembles a basketball. On the Statement uniform, the space reads “New York”. Since 2015, the team had daily fantasy sports service DraftKings grace the top space, but that partnership has ended.

Along with the Atlanta Dream and Las Vegas Aces, the Liberty are one of three squads to include part of their identity, and not a sponsor, above the logo.

The logo spot is also unique in that it gives the spot to the Liberty’s secondary logo, a simplified version of their Statue of Liberty-adorned primary emblem. It features the aforementioned torch sandwiched by the letters “N” and “Y”. Lenker says that this is not a promotion to primary for the logo, but earned the real estate due to its simplicity.

“This is a secondary logo, but this is the first time it has this placement on the jersey,” she said. “For all the logos that were selected on the jerseys, it was the most iconic, simple mark that represents our 12 teams. It’s actually represented on the shorts as well, so its carried from the shorts, up to the jersey.”

Despite Lenker’s explanation, the Liberty has made their secondary logo their avatar on their social media accounts. The team has also unveiled a new team social media identity of “#LibertyLoud” and “#StayLoud”, just in time for their partial move to Brooklyn this season. Under new control of Brooklyn Nets minority owner Joseph Tsai, the Liberty will play two games at Barclays Center this season. The first is an exhibition against the Chinese national team on May 9.

Completing the set is a pair of sponsorships, albeit in a smaller capacity. While league-wide partner AT&T appears under the logo (replacing Verizon), the Liberty have begun a new partnership with the Hospital for Special Surgery, their “HSS” moniker appearing in the upper right-hand corner of the uniform. Previously, that space bore the team’s primary logo.

The set is completed with the return of a pink and gray alternate, part of the league’s Breast Health Awareness initiative. Each of the league’s teams will dedicate an August home game to the cause.

Asia Durr will be the newest name to wear the jersey, as the Liberty made her the second overall pick of the draft. Joining her will be second-rounder Han Xu and third-round choice Megan Huff.

The aesthetic rebrand is part of the transformation on the entire league front. WNBA executives announced earlier this week that the league has begun a gradual rebrand, one that began with a new logo. The transformation is expected to be fully implemented by the 2020 season.

“The WNBA is reasserting itself as a bold, progressive league that stands for the power of women,” said WNBA COO Christy Hedgpeth in a league statement.  “This new voice will amplify our mission of empowerment and inspiration and will magnify what makes our league exceptional: the strength, diversity, and multi-dimensionality of the women of the W.”

NEXT: The Liberty Welcome Back Tanisha Wright While Letting Go Sugar Rodgers