While the Brooklyn Nets have become darlings of the NBA, the Los Angeles Lakers are currently the league’s messiest franchise. Look no further than D’Angelo Russell.

The Lakers entered the 2018-2019 season with big expectations; Vegas oddsmakers predicted that the team would win around 48 games and finish between third-to-fifth place in the Western Conference playoff hunt.

Brooklyn, on the other hand, was served a 32-win season via the folks in Vegas, thus suggesting that the Nets would miss the playoffs for the fourth-straight season.

To Vegas’ credit, experts’ predictions were partially correct. One of these teams is on the verge of advancing to the playoffs; the other is one game away from elimination.

What Vegas didn’t predict was that the Los Angeles Lakers and the Brooklyn Nets have become basketball’s version of “The Change-Up.”

Over the course of 70 games, they’ve switched identities.

Los Angeles’ timeline has changed drastically over the course of the last year and a half. Per The Ringer’s Zach Kram, from 2014-to-2018, the Lakers recorded one of the league’s worst five-year runs in NBA history. That’s right, even with a landscape that was plagued by the Process 76ers, the hot mess Pheonix Suns, and the “shield your eyes, honey, it’s the” Sacramento Kings, Los Angeles’ cornerstone franchise was in the absolute basement.

Together, these two would form the ultimate duo; a partnership that could feed off each other’s strengths to push the NBA’s most storied franchise into a new millennium.

The Lakers’ new era started off in a big way. During the 2017 NBA finals (very close to when Magic was hired), a major rumor regarding the NBA’s best player was leaked to mainstream media.

At the time, The Ringer’s Kevin O’Connor broke the news that the Cleveland Cavaliers’ LeBron James could be headed west, possibly to join the Los Angeles Lakers or the LA Clippers. As you can imagine, the reports practically broke the internet … Jay-Z and Beyonce style.

Even with a decrepit record, the Los Angeles Lakers made more sense as a suitor for LeBron’s talents. The Lakers had a plethora of cap space to bring LeBron and another major free agent aboard during the summer of 2018. Not to mention, the team had plenty of young assets to flip for either a star player or multiple quality role players.

And boy, did they flip those assets.

Larry Nance Jr. and Jordan Clarkson, once building blocks to the “Baby Lakers” bench, were flipped to Cleveland for Isaiah Thomas and Channing Frye‘s expiring contracts. Clarkson and his $12.5 million in salary were seen as a roadblock to the Lakers’ future dynasty.

In the summer of 2018, the Lakers let Julius Randle walk to join the New Orleans Pelicans on a 2-year, $18 million deal. Once again, in the pursuit of cap room, the Lakers didn’t feel the need to throw mid-major money at Randle.

Most important of all, the Lakers’ let go of young point guard, D’Angelo Russell, in a 2017 Timofey Mozgov salary dump. Russell—Los Angeles’ number two overall selection in the 2015 NBA draft – underachieved during his two seasons in Southern California and also ran into some off-court issues with teammates. (None of which need to be discussed, by the way. They’ve been run into the ground by a full-size SUV by now.)

In the season after Russell’s exit, the Lakers finished with a 35-47 record; Los Angeles’ best record in five years. 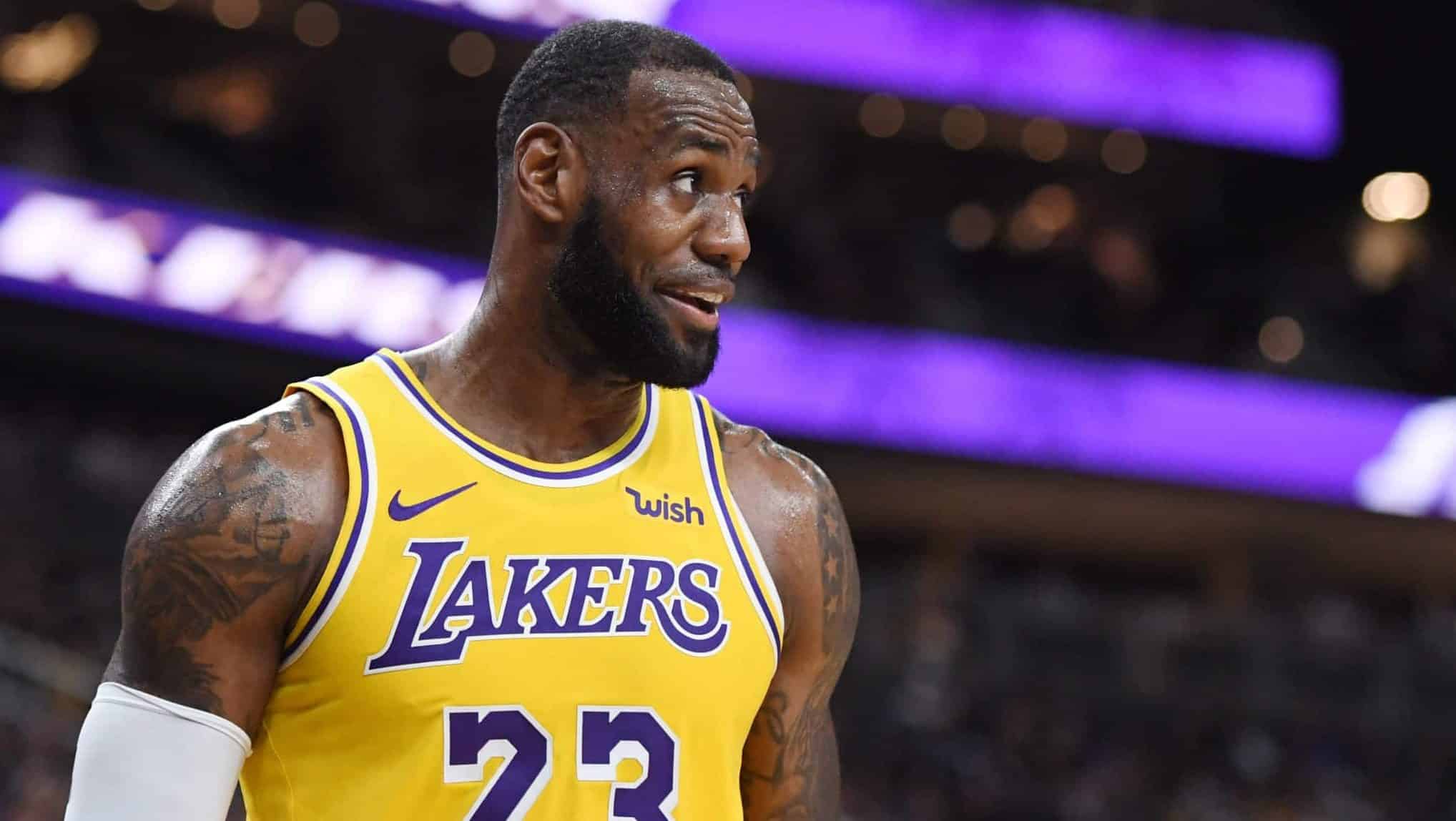 Los Angeles continued to trend upwards by signing LeBron James to a 4-year, $153-million deal in the summer of 2018. On top of this, the team had maintained enough cap room to bring in a second star next to LeBron.

Paul George was the primary target for the Lakers. George, who had been traded to the Oklahoma City Thunder before the start of the 2017-2018 season, was coming off a humiliating playoff loss against the infantile Utah Jazz and rookie Donovan Mitchell. George’s interest to join the Los Angeles Lakers had been telegraphed since his June 2017 trade request to the Indiana Pacers.

With the humiliating playoff loss in PG’s rear-view window, it seemed all but certain that George would join LeBron in LA. Magic Johnson was so confident about George’s arrival that he went onto live television to grossly boast about the Lakers’ potential dynasty with PG13 in the fold. (He was subsequently fined $500,000 by the NBA.)

Then, things started to go awry.

George shocked the world by signing a four-year, $137 million deal to stay with Russell Westbrook and the OKC Thunder.

Obviously, the Lakers were taken aback. Fortunately, the team had a Plan B. And a very good one at that.

Just fifteen days before George stabbed a thunderbolt-shaped sword into the hearts of Laker faithful, Kawhi Leonard put in his formal trade request to the San Antonio Spurs after a tumultuous season.

Leonard, an MVP candidate just two seasons before, was seen as the perfect antidote to the Lakers’ sorrows. With plenty of assets to deploy – such as Lonzo Ball, Kyle Kuzma, Brandon Ingram, and Josh Hart – Los Angeles had the best trade package for a player of Kawhi’s caliber. All Los Angeles had to do was swing a deal with its former playoff rival, the San Antonio Spurs.

It didn’t happen. The Spurs stuck it to the Lakers and refused to work with them. Kawhi was sent packing to the tundra of Toronto in return for DeMar DeRozan and a few young pieces.

Meanwhile, Los Angeles was stuck with LeBron James, some young players, and not much else. In order to beef up the roster, the Lakers’ front office signed some tough veterans to compete with the league’s giants. This included the playoff-savvy Rajon Rondo, NBA champion JaVale McGee, Michael Beasley (who had gone to war with Bron during the tail-end of the Heatles days), and Lance Stephenson.

Sure, on paper, the roster was a little bit odd. But the Lakers had the best player in the league. Although it wasn’t set in stone, historical data suggested that The King’s presence was enough to lock down a playoff spot.

Not to mention, Los Angeles’ offseason target—Kawhi Leonard—would come off the books in the summer of 2019 as a free agent.

Fast forward to where are today. The Los Angeles Lakers have been eliminated from the 2019 NBA playoffs by the young Brooklyn Nets. The Lakers have been one of the worst defensive teams for the better half of the season and are disgustingly awful at three-point shooting.

The growth of its young players has been completely stagnated after the team offered the remaining “Baby Lakers” to New Orleans in return for Anthony Davis.

Lonzo Ball hasn’t seen the floor since Jan. 19th because of a high-ankle sprain. Brandon Ingram was just recently diagnosed with a blood clot. (Prayers up for BI, by the way).

Even the once immortal LeBron James has come down to earth thanks to the efforts of Croatian Kobe.

Kawhi Leonard, the apple of the Lakers’ eye, is now rumored to either

… to join the LA Clippers; the red-headed stepsister to the Lakers in LA county.

Julius Randle had exploded in New Orleans, averaging 21 points (on 53 percent from the field), 8.7 rebounds, and 3.1 assists.

Even dealing Jordan Clarkson has come back to bite the Lakers. Clarkson has grown into an off-the-bench sparkplug for Cleveland.

But the move that will haunt the Lakers the most will be that 2017 salary dump.

D‘Angelo Russell has been an anomaly this season. After struggling with injury during his first year in Brooklyn, the fourth-year guard has taken the NBA by storm.

The point guard pieced together a dominant January-to-February run in which he averaged 24.7 points per game (the 14th-best mark in the NBA), made 38.8 percent of his 8.8 attempted threes and dished 7.6 assists.

His scorching-hot start to 2019 earned D-Lo his first selection to the All-Star team.

Meanwhile, the Brooklyn Nets have defied all expectations and parameters for the 2019 NBA season. For a team that was comprised of second-round picks, late-first-rounders, and guys on their last chances in the NBA (looking at you, Spencer Dinwiddie), no one expected this group of guys to go far this season (except Elite Sports NY’s own, Danny Small, apparently). At best, perhaps the team could slightly exceed its predicted 32-win total by a few close victories.

Yet, somehow, here we are. After many setbacks, injuries, and a whole lot of roster turnover, the Nets sit at seventh-place in the Eastern Conference with just eight games remaining on the schedule. Given how bad of a card Brooklyn was dealt following the Billy King mess, it’s miraculous that it only took four seasons for the team to fully recover.

Brooklyn is one step closer to a surprising playoff birth. With the 8th-place Miami Heat getting blown to smithereens by the Milwaukee Bucks, Brooklyn has gained a two-game advantage over its competitor.

On the flip side, Los Angeles has clinched its sixth-straight playoff elimination; an embarrassing fate for a team with a top-5 all-time player on its roster.

Magic Johnson is 0-for-2 in piecing together a team with a winning record. After compiling a roster that looks closer to a stand-up comedian setlist than a pro basketball team, perhaps he deserves to sit this one out.

Most of all, the man that Magic traded for packing peanuts — D’Angelo Russell — is on the cusp of his first playoff experience.

After dealing Russell, Johnson had this to say about his former player:

According to ESPN’S BAXTER HOLMES, “We want to thank him for what he did for us. But what I needed was a leader. I needed somebody also that can make the other players better and also [somebody] that players want to play with.”

Two years later, Russell has become that guy and more. He’s the undisputed leader of a playoff team in Brooklyn. Russell gets the guys around him going through his sweet distributing. He’s the alpha male that his young Brooklyn teammates rally around. In fact, I’d say that Russell has shown early signs of a killer instinct that hasn’t been seen since the days of number 24 on the Lakers.

Although many things have gone wrong for Los Angeles, the team still has room to sign two max players this summer.

After some accounting work and the (likely) exile of Allen Crabbe (perhaps attached to Brooklyn’s 2019 draft pick), the Nets could match the Lakers’ braggadocious cap room.

If Los Angeles strikes out with Anthony Davis again this summer, its future becomes incredibly murky. The Lakers’ core has been fragmented by a locker room that is segregated by age-gap and betrayal, and the team’s front office has been an undisputed mess.

Times have certainly changed. Los Angeles, once a storied franchise that brought in Shaquille O’Neal, Wilt Chamberlain, and Kareem Abdul-Jabbar, is now in complete dysfunction. In fact, the Lakers are a couple of bad moves away from becoming the next New York Knicks; a celebrated franchise that suffers from a lack of leadership, that strikes out with major free agents and fails to win a championship for decades on end.

Brooklyn is a much different story. With a young core of promising players, the Nets are one piece away from being a finals contender. Perhaps D’Angelo Russell can grow into that guy. But regardless, the future is bright in Brooklyn. According to major sources such as ESPN’s Stephen A. Smith, major free agents are taking notice of Brooklyn’s successes.

With a savvy front office, a core with excellent chemistry, a breakout star in D’Angelo Russell, and a Coach of the Year candidate in Kenny Atkinson, Brooklyn is a top-notch destination.

Brooklyn could usurp Los Angeles as a hot destination for the league’s stars. The Nets might be well on their way to becoming a potential dynasty.