“Put your testicles in the C-gap.”

With that one short yet substantial film session coaching point, Gregg Williams became one of the stars of “HBO’s Hard Knocks: Training Camp with the Cleveland Browns” this past summer.

Sowing his oats during the early 1990s in Houston with the Oilers, he worked under Buddy Ryan for a season (1993). He also paid close attention to Dick LeBeau‘s famed zone blitz with the Pittsburgh Steelers. After Super Bowl appearance with Jeff Fisher and a failed head coaching stint in Buffalo, he’s settled down as one of the NFL’s most respected defensive minds.

His true holy grail was capped at the end of the 2009 NFL campaign when his New Orleans Saints defense beat Peyton Manning and the Indianapolis Colts in the Super Bowl.

Understand, however, that the man isn’t reckless. 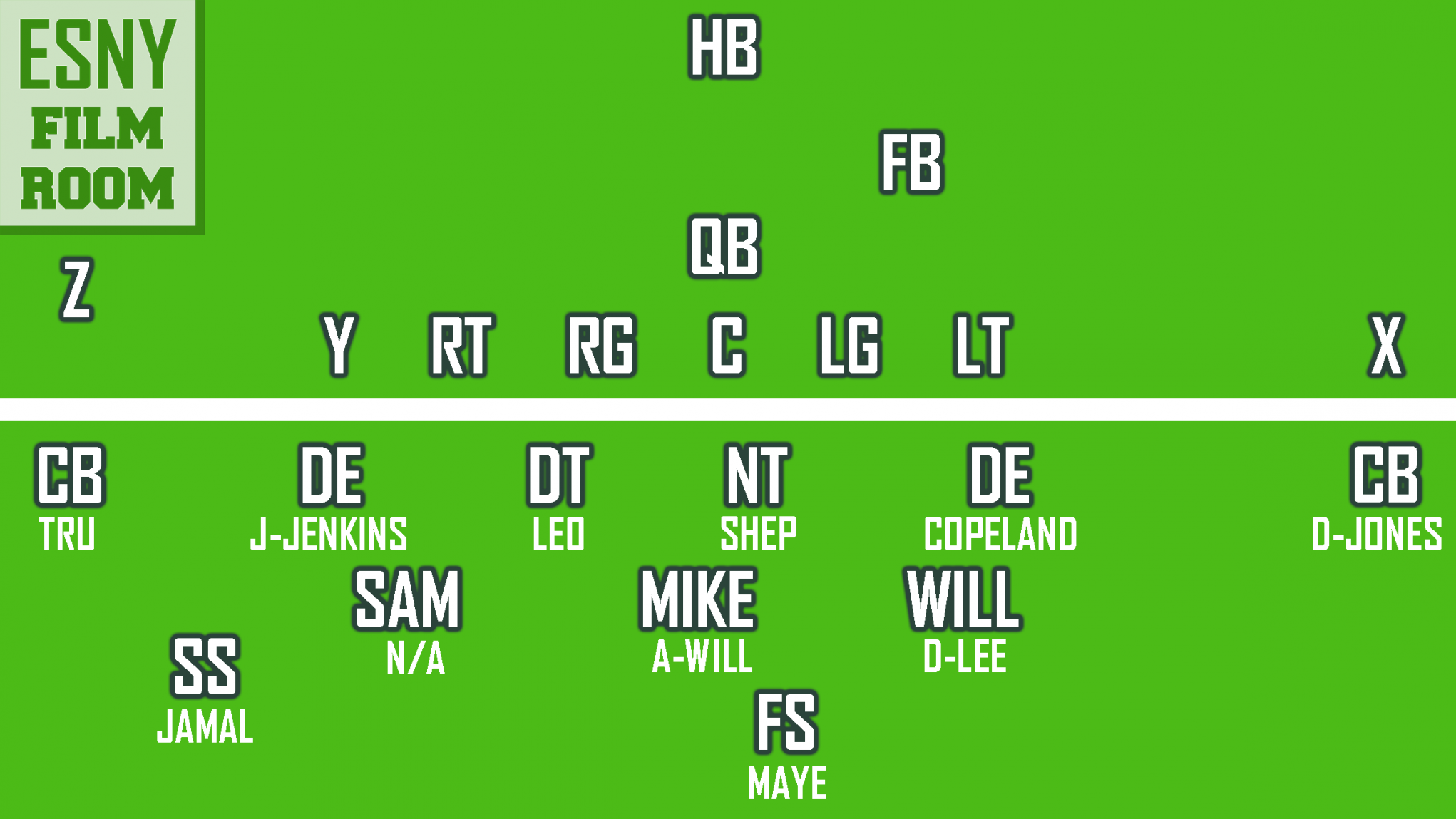 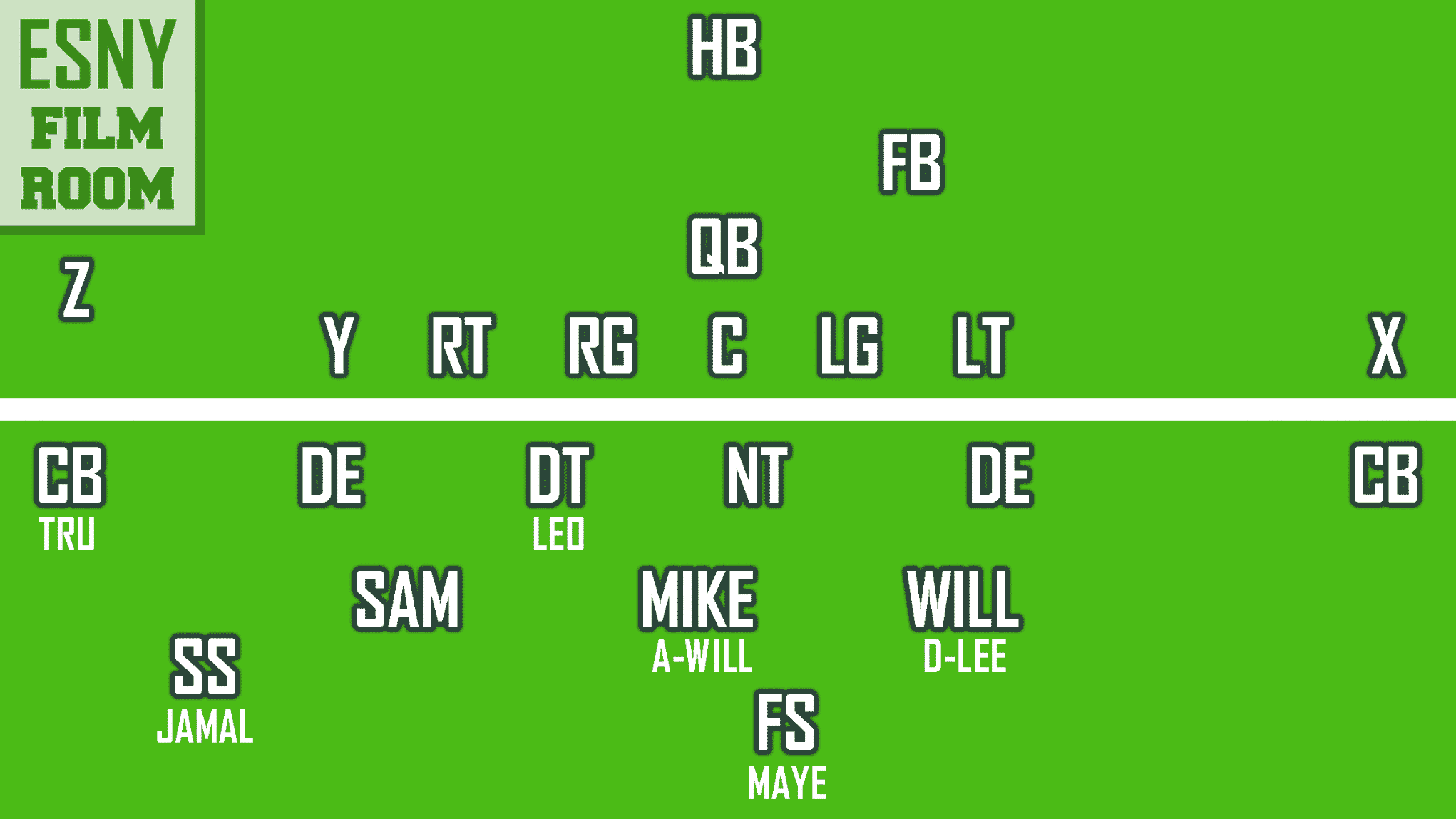 Right off the top, don’t consider Avery Williamson as the answer in the middle. Gregg Williams loves to run the Cover 2 Buc. This means the MIKE must be a fleet-of-foot, coverage monster. In fact, Darron Lee may actually fit the MIKE nicer within this system. We simply have A-Will listed as the MIKE due to current personnel defaults.

The edges are what’s critical. Williams’s most genius playcalling would fail if both edges remain bare. The 4-3, especially his 4-3 only thrives if the defensive ends can win one-on-one pass-rushing battles. 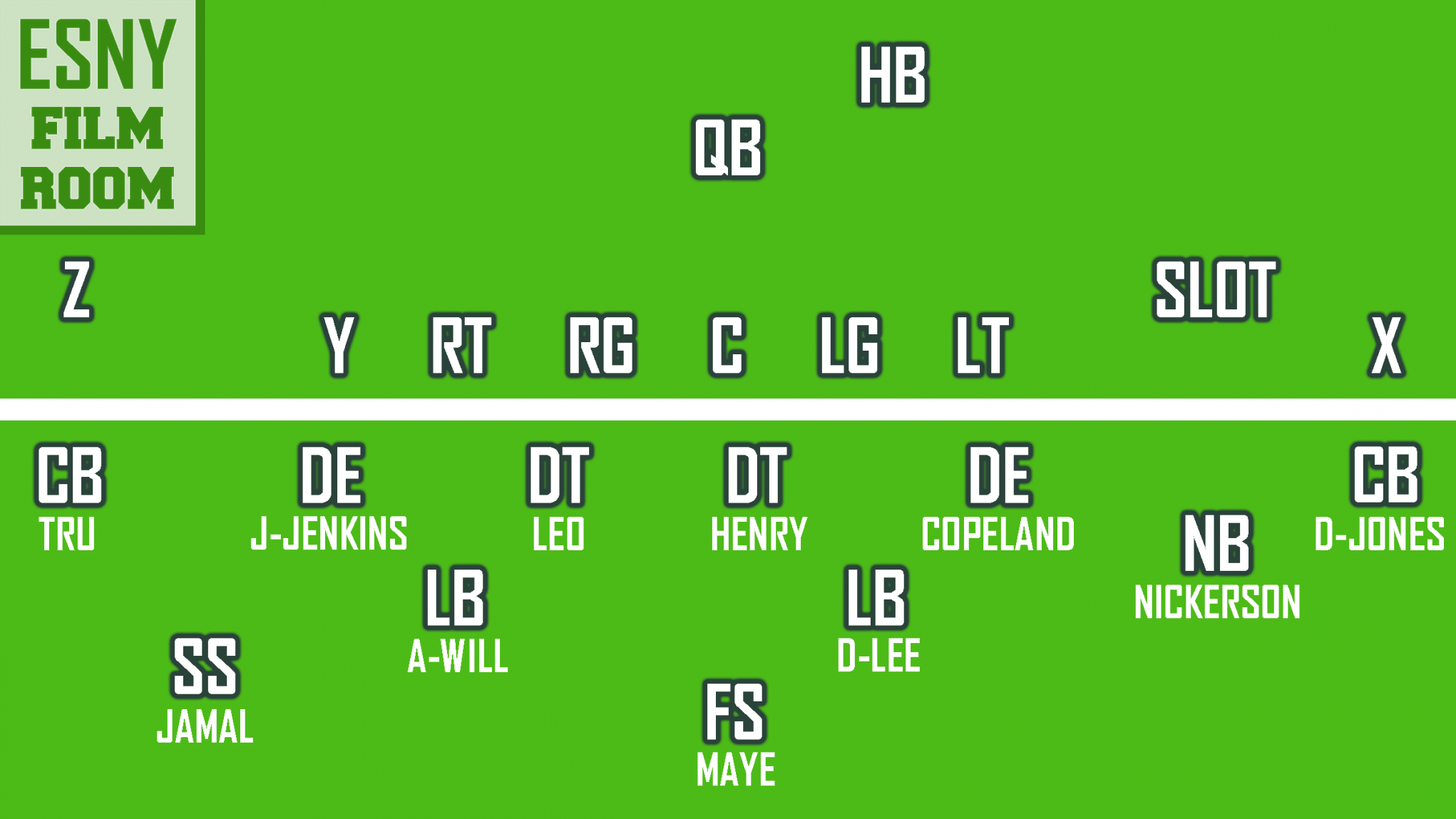 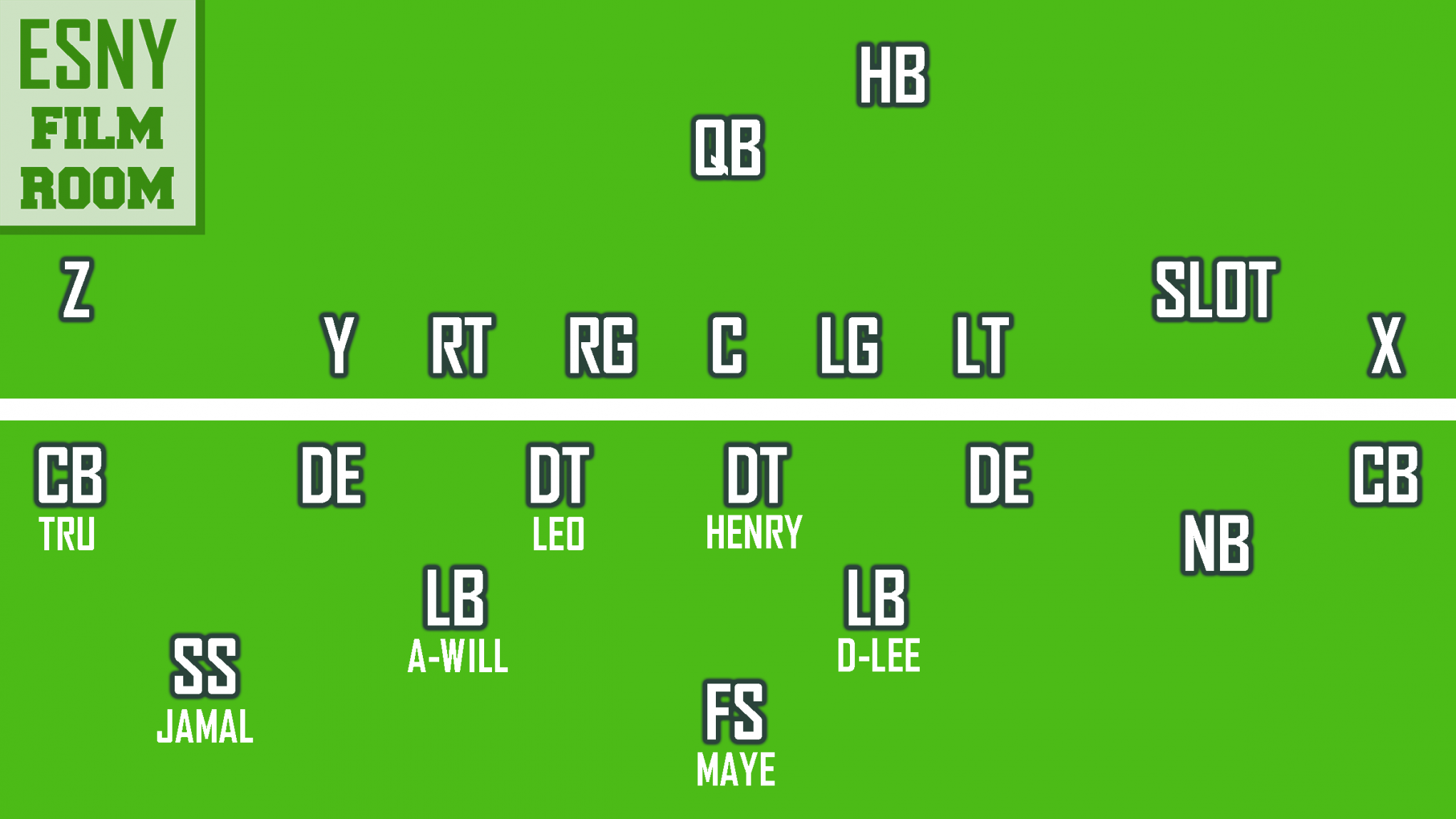 New York is much better off in the nickel at the moment as long as Henry Anderson is brought back. It matters very little that he doesn’t fit within the base. Sub-packages (11 personnel) is the new base in the league, meaning he, alongside Leonard Williams, combine as a monstrous interior pass-rushing duo.

Sure, a corner is needed opposite Trumaine Johnson, but it’s both edges and the MIKE that remains of the utmost importance this offseason.

The rough estimate concerning the number of Gregg Williams fronts is around 42. That’s incredible. Players within his unit are equipped with a huge playbook and need to come loaded with football IQ.

As far as the 4-3 base is concerned, remember the big four.

The 4-3 Pro is the standard. With four defensive linemen (usually a 3-technique defensive tackle and a 1-technique nose tackle) and three linebackers on the second level, Williams routinely runs the 4-3 pro.

The 4-3 Under is identified when the SAM drops down on the strong-side edge. This pinches in the strong side edge and 3-technique.

The 4-3 Over usually showcases the SAM as outside of the box—outside of the tight end or tackle while still on the second level. The over is still identified even in the 4-2-5 nickel when the slot corner is doing his thing.

Finally, the 4-3 Okie is what’ll remind you of a Todd Bowles defense. It’s the 3-4 pro setup while running with 4-3 personnel. There are plenty more variations such as the Eagle (which looks like an Okie but pinches in the three interior defensive linemen even further), but we’ll leave that one to the imagination for now.

As aggressive as Gregg Williams is, deception is just as raging.

In the above example, the strong safety is lined up in a wide 9 space. This means Jamal Adams. Routinely, Williams will use his strong safety in so many spots which is why his marriage with The President will flourish.

Both the safety and the defensive end, lined up in a 6i, crash down on this early-down run situation. They guess right with the Pittsburgh Steelers running an inside zone yet if the back bounced it out, the SAM, who’s on scrape duties, must shut down the edge and turn it in.

Deception. Watch Drew Brees presnap in the above example.

He kills the original call and moves to a strong-side A-gap run. It looks incredibly open due to the 1 and 4i positioning.

We know it’s a trap due to the defensive tackle lined up at the 1 crossing face so aggressively to shut down the strong-side A-gap. It’s a tremendous example of run-game trap deception.

The single blitz concept Gregg Williams loves most is the overload.

Much like Rex Ryan, Williams loves the exotic action. He’s filled with complex schemes that attempt to turn the offensive line’s attention one way while overloading the opposite side.

The above example is actually only a four-man rush. It’s technically not a blitz.

It doesn’t matter. It’s so impactful that four men are all that’s needed while still dropping seven in coverage.

The other callout is the zone-blitzing concept. Routinely, Williams will drop not only edges, but interior defensive linemen as well. This means you, Leonard Williams. Get those hands ready.

Again, another (technically) non-blitz that would have hit home.

It’s a four-man inside pressure with both edges dropping into the flats. Presnap, it looks like the wide receiver screen is going to pop (outnumbering the defense three-to-two). But instead of playing the flat with the strong-side backer, he pops out the strong-side edge while yielding a free-runner inside.

Here’s the truest form of an overload blitz.

Once that happens, one DB and the linebacker will form a two-on-one with the lone running back staying home.

Jamal Adams is going to be a monster.

Quite frequently, Gregg Williams will roll presnap. He’ll do his best to disguise coverages presnap while also maintaining balance throughout the game.

In this example, a single-high press turns out as a two-deep coverage.

What in the world is this cornerback doing? For one thing, I’m pretty sure he wasn’t acting on his own accord.

First and foremost, look how inside he is presnap. It’s not even an inside CB technique. It’s something out of this world. Williams’s defensive backs do these wacky things at times simply to force the quarterback to scratch his head.

On this play, it’s a clear defensive shot play. The corner is jumping the seam. Should Derek Carr actually complete a deep out on the wide side of the field, Williams would have tipped his cap and said “good job.”

Williams mixes in a ton of single-high and two-deep looks. In single-high, he often labels it a single-high angel. Angel, for its completely different zip code the centerfielder is playing.

Due to his aggressive nature, he hates to see his unit get beat over-the-top. Marcus Maye will be playing much deeper this coming season.

When it’s two-deep, it’s not necessarily always the two safeties.

In the above example, the corner and a safety take the two-deep while starting in the three-deep look presnap.

Aggressive? Yes. But his defense will also drop nine on occasion.

Against Brees, he drops nine here in a Cover 2 Buc while rushing only the two edges. I’m not a huge fan of dropping interior defensive linemen frequently (I am of the edges, especially against Tom Brady), but it’s effective in certain spots, especially in the red zone.

The last coverage example is a dandy.

There’s no single-high angel on this crucial 3rd-and-6. Instead, Williams throws both safeties in a short robber. This means the 9-route is a worry.

The main reason he rolls with this setup is strictly due to the nature of today’s NFL. Rub and pick routes rule the roost. So what Gregg Williams does here is places both safeties in the robber while tasking them with charging up if a pattern becomes hopelessly open.

It happens and the safety takes charge.

The greatest coaching point of the play is that the corner who found himself picked actually replaces the safety to darted up for his specific responsibility.

It’s a perfect example showcasing how the entire 11-man unit must come to the party with excellent football intelligence.

NEXT: Adam Gase's Passing Attack vs. The Titans (FILM ROOM)