Across social media, the so-called “10 Year Challenge” is enthralling users. Originating on Facebook, this internet challenge surprisingly doesn’t feature partakers injuring themselves. Rather, they have taken a trip down memory lane, showcasing their growth, both physically and mentally, since 2009.

You can excuse New York Jets fans for not being so willing to participate.

For the eighth consecutive season, the Jets have watched the NFL playoffs on television, the third-longest active streak in football. The football gods have further cursed the Jets with the postseason’s results. For the eighth straight third Sunday in January, the Jets will watch their division rivals play for another Super Bowl trip, as the New England Patriots will battle the Kansas City Chiefs (6:40 p.m ET, CBS).

It seems shocking in hindsight, but the last team to end New England’s season prior to the third Sunday in January was none other than the New York Jets. Their 28-21 victory at Gillette Stadium punched their second straight ticket to the AFC title game. While neither league semifinal trip was victorious, hope seemed to be in fair supply for the brash, young squad.

Since that historic upset, the Jets have amassed a 50-78 ledger, a stretch defined by silliness, carelessness, misfires, and overall ineptitude. Only four teams have compiled a worse record in that span, which New England (113-34) leads by a 23-game margin over runner-up Seattle.

Despite another lost season, this one ending at 4-12, there are legitimate reasons to have hope for the Jets. Rebellions, as Rogue One taught us, are built on hope, and the Jets have a major beacon on each side of the ball. Many believe Sam Darnold will end the Jets’ decades-long search for a franchise quarterback. Defensively, no in New York is more eager to shake the “Same Old Jets” moniker than Jamal Adams.

If they, along with the rest of a relatively young Jets squad, are looking for inspiration, they can look no further than the 2009-10 teams. With September marking the 10th anniversary since that first epic season kicked off, we look at the most important lessons the modern Jets can take…

For better or worse, Mark Sanchez is the first name anyone brings up when talking about those finalist squads. To his credit, the rookie quarterback rose to the occasion in those years, throwing three touchdowns in the New England divisional victory. But the heavy work was done up front by the offensive line, a unit who saw their efforts rewarded with postseason accolades.

In each of the two “final four” seasons, the Jets allowed just 1.6 sacks per game, ranking third and second respectively in 2009 and 2010. Ferguson retired early at 32, but reached three Pro Bowls and played all but one snap in his NFL career. Mangold became one of the most endearing personalities in New York, and reached seven Pro Bowls and two All-Pro teams.

Over his first two seasons, Sanchez was sacked at least three times on only six occasions. The running game likewise thrived, leading the league in rushing in 2009 before coming in fourth the year after. In those respective seasons, Thomas Jones enjoyed a career-high in yardage, while the aging Ladanian Tomlinson showcased a brief resurgence.

As the blocking broke down, so did the Jets. Save for a second place finish in 2015, coinciding with the one winning season since 2010, the Jets had finished in the lower half in sacks against in each following year. They did come in 13th this season to break the trend, but Darnold was still sacked 30 times, a scary number amplified by the fact he missed three games entirely.

To make their young franchise face as comfortable as possible, the Jets will need to beef up on blocking help, either through the draft or free agency. Perhaps they can emulate the Faneca/Woody additions by pursuing a reliable veteran like Rodger Saffold, who will partake on the other side of the bracket this weekend with the Los Angeles Rams. 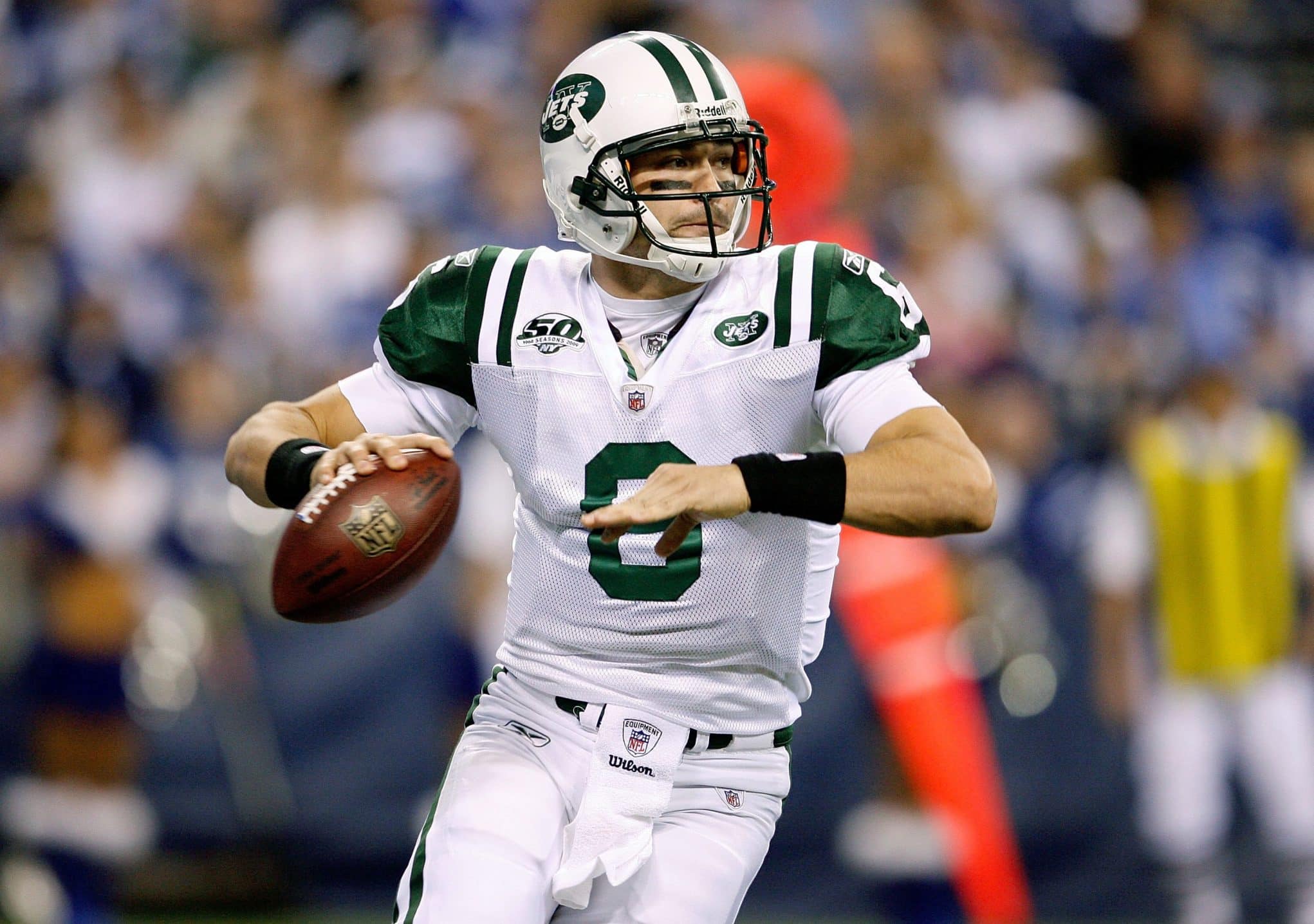 Don't Make the Young QB Do It All

The Jets are probably hoping that the only thing Darnold will have in common with Sanchez is the fact that they both went to USC. But the Jets can use their early Sanchez blueprints to help them manage Darnold moving forward.

In Sanchez’s rookie season, the Jets were 6-1 when Darnold threw 22 passes or less. They increased his responsibilities in his sophomore year, as he again went 6-1, but this time with a 30-attempt requirement. Over the rest of his Jets career, however, Sanchez was continually called upon to work the Jets out of jams. The heavier the weight became, the more Sanchez faltered. Under the same 30-pass split, Sanchez went 5-11 over the next two years, leading to his departure in 2014.

In the first two seasons, Sanchez served as a strong game manager. While the expectations are much higher for Darnold, especially in today’s pass-happy NFL, there’s nothing wrong with looking for help, especially for a rookie. Some quarterbacks (I.e. Alex Smith) have built solid, lucrative careers that way. But Darnold’s early confidence could be shaped by the way his first few seasons pan out. It’s fine for the Jets to ease him in the role, especially in the midst of a rebuild. Under the aforementioned 30-pass parameter, Darnold went 1-7.

This makes the assembling of assistants, both players and coaches, vital for the Jets in the foreseeable future. That includes improving the protection, as mentioned above, and developing a rapport with receivers. Darnold and the Jets made good strides toward that in his rookie season. While Sanchez had trouble finding a true “favorite” target, Darnold developed a quick connection with fellow rookie Chris Herndon. In a move that strengthened continuity, the Jets inked one of Darnold’s top targets, Quincy Enunwa, to a four-year extension.

This one may seem obvious, but recent versions of the Jets seemed to have forgotten the importance of making the quarterback uncomfortable.

The Jets are a team that, historically, prides themselves on defensive exploits, particularly those that made opposing throwers anxious. This was a team, after all, that boasted the services of the “New York Sack Exchange” in the 1980s. During the conference title runs, elite quarterbacks felt that wrath of the Jets’ defense, including the legendary Tom Brady. Perhaps nervous from a relentless rush featuring Shaun Ellis and Calvin Pace, Brady was quickly unnerved, forced to make quick, rash decisions. Notably, in the first quarter, some late pressure from Pace might’ve played a role in a Brady overthrow deep in Jets territory. The errant pass, intended for running back BenJarvus Green-Ellis, instead landed in the arms of linebacker David Harris, who went 58 yards the other way.

Pass rush improvement was on display in 2018, as Henry Anderson and Brandon Copeland each generated more pressure, but other key components, like front line building-block Leonard Williams, struggled to gain traction. The future of the AFC, a competition to dethrone Brady in the Patriots, is now in the hands of several young throwers. Patrick Mahomes will look to continue a historic starting debut on Sunday, while the nation has been overtaken with Cleveland’s top overall pick, Baker Mayfield. Making a strong rush even more imperative is the emergence of young mobile quarterbacks like Deshaun Watson, Lamar Jackson, and Josh Allen. With Gregg Williams and his fearsome 4-3 set joining the Jets next season, new nightmares may be in store.

This season’s draft is full of front line help. ESPN’s Mel Kiper Jr. has the Jets taking Alabama tackle Quinnen Williams (19.5 tackles for loss, eight sacks as a redshirt sophomore) with the third overall pick, but some fans have coveted Kentucky’s end Josh Allen (no relation to the Bills quarterback).

Don't Be Afraid to Spend

The potential resurgence of the New York Jets is going to take a full effort from everyone in the organization. That includes the front office.

In making their AFC title runs, the Jets weren’t afraid to take chances, not afraid to turn one team’s trash into their own treasure. For example, in between the treks, the Jets added Tomlinson and Jason Taylor, future Hall-of-Famers that had been abandoned by their squads. Their veteran leadership helped energize both sides of the ball, and Tomlinson enjoyed a brief rebirth, tallying over 1,200 yards of total offense. One year prior, linebacker Bart Scott couldn’t wait to ink a six-year deal with the team, joining tenacious safety Jim Leonard. Each spent prior NFL service in Baltimore and played a huge part in the Jets’ postseason defensive shutdown efforts.

This season, the Jets will have over $100 million in cap space to worth with, creating one of the most exciting, but fragile, offseasons in team history. Over two magical seasons, the Jets were able to, for the most part, spend wisely under the direction of Woody Johnson and general manager Mike Tannenbaum. With Mike Maccaggnan set to sit in the same seat almost a decade later, the lessons learned in the century’s first decade can serve as vital reminders of the talent and savvy necessary to compete for a Super Bowl. Lavish purchases, even with the cap jackpot, may have to be put aside to plug up the team’s other holes. But with the cap space, a young quarterback, and an exciting coach staff pours its way in, New York, for the first in forever, is an attractive free agency destination.

Nearly a decade removed from those golden years of green, the Jets truly believe they’re trending in the right direction. But to fully take advantage of their future, lessons from the past must be relearned. The past will never truly die in New York. Even when a Super Bowl wasn’t to be, the two squads are still sources of inspiration for many of those who bear green in the area.

In other words, it may in the past interests of everyone to look the past, the place you’ve already looked, in properly looking forward.