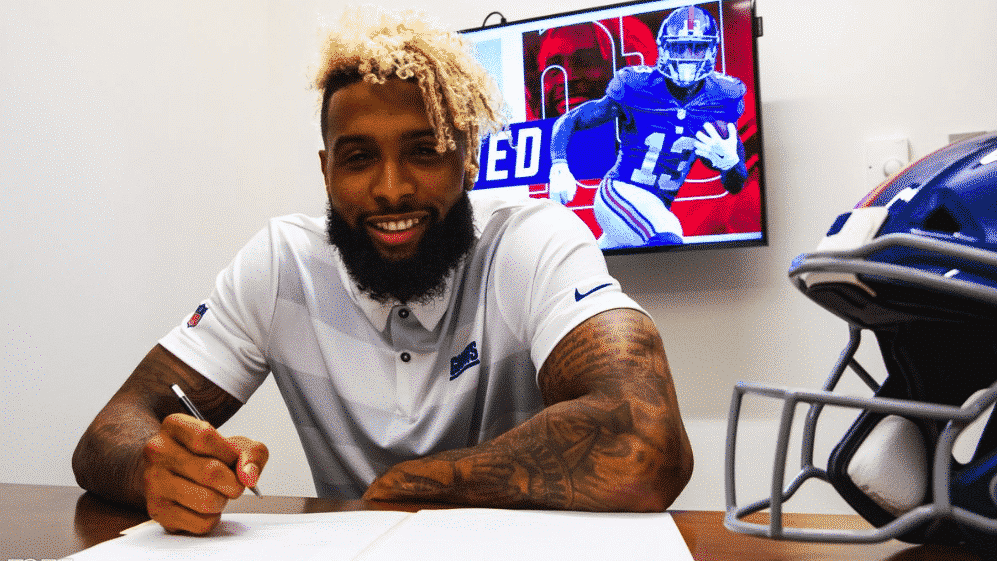 Most kids bring back bugs and crafts back from summer camp. Odell Beckham Jr. will leave camp with $95 million.

The superstar wide receiver spoke with the New York Giants official website after inking his new contract extension, one that makes him football’s most expensive receiver. In words with Michael Eisen, Beckham rejoiced in the contract talks reaching their conclusion, and also the fact he’s healthy enough to be back on a competitive NFL field.

Beckham missed the final 11 games of last season with an ankle injury, but is expected to be with the Giants when they begin their latest Super Bowl trek in just 13 days, opening their season against the Jacksonville Jaguars.

“I don’t know if it’s a relief, I don’t know, it’s a combination of everything. You’ve worked all your life to get to this point and it’s finally here,” Beckham told Michael Eisen. “I have to thank God for being able to put me back together mentally, physically, spiritually. This is just truly amazing; I don’t even know the right words to describe.”

The upcoming 2018 season was set to be the last year on Beckham’s original rookie contract, a four-year, $10.4 million contract whose fifth-year option was picked up earlier this offseason. Now, he gets $95 million, $65 million of which is guaranteed, over the next five seasons.

Beckham says he won’t let the new payday go to his head.

“For me, it’s not going to change my goals that I have on the field. If anything, it just increased them even more,” he said. “I just want to be able to come out and play football the way that I’ve always played, the way that I love it and have some of my best years that I’ve ever had in my entire life. This is nothing but more motivation to go even harder and to do even better.”

Like many prognosticators, Beckham sees the potential in the new look Giants offense. His teammates, namely fellow receivers Sterling Shepard and Roger Lewis, were more than happy to get in on the celebration of Beckham’s new deal.

“The offense seems to be amazing,” he said. “I feel like we’re going to be able to put up a lot of points and do it in a bunch of different ways. We have so many explosive playmakers on this team. Evan Engram, (Sterling) Shep(ard), Cody (Latimer), Saquon (Barkley). The O-line is playing at a high level, they look very together, and it’s time for Eli to bring us home. It’s time for him to bring us back to what we all dream of doing, which is winning a Super Bowl, so the goals are never going to change, it’s just that time to go is now.”

Those who offered Beckham his new deal, general manager Dave Gettleman and principal owner John Mara, were happy to get business done as well.

“I never worried whether or not we would get it done,” Gettleman declared. “I’m pleased because the litmus test for a contract is that neither side is ticked off before the ink can dry, and neither side should be ticked off. It’s a very fair deal.”

Though it’s unlikely Beckham will partake, the Giants will conclude their preseason slate on Thursday night at home against the New England Patriots (7:00 p.m. ET, WNBC).