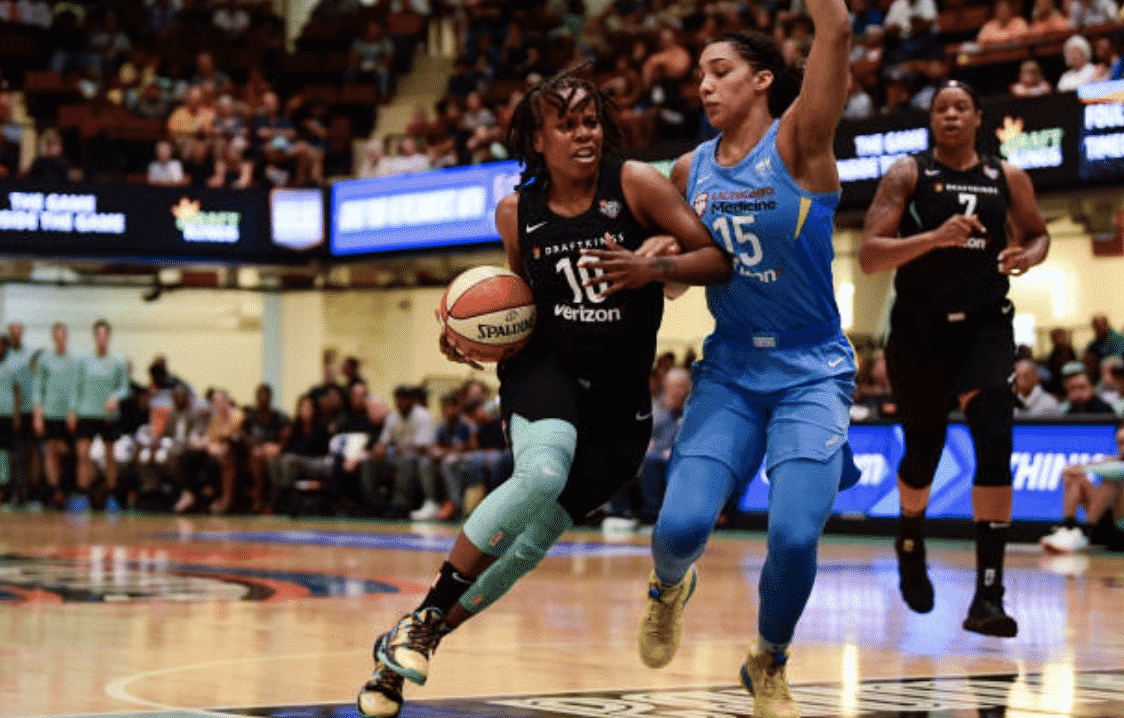 The New York Liberty played their finest game of the season against the Chicago Sky, as they earned back-to-back wins for the first time since June.

Faced with the prospect of missing the WNBA playoffs for the first time since 2014, the New York Liberty needed to make sure any momentum gained from Wednesday’s buzzer-beating thriller didn’t go to waste.

Going up against fellow playoff chasers from Chicago, the Liberty capitalized on their newfound momentum.

Six Liberty players reached double figures, led by Tina Charles’ 21, and the Liberty crushed the Sky for a 107-84 victory on Sunday afternoon at Westchester County Center. It marks the first time the Liberty (7-14) have won back-to-back games since May 29-June 2, but the past two games are bringing positive vibes that go beyond wins and losses.

Dominated from start to finish. pic.twitter.com/ul2al5ztvs

“Great, great time win by our ladies today. So pleased by a lot of things. Great to follow up a tough-fought win in Connecticut by coming back home and being locked in and ready to play,” head coach Katie Smith said. “I’m pleased we’re locked in and the ball’s finding different people, because we need everyone to be a threat in this league.”

The Liberty currently sit four games out of the final playoff spot in the league, with eighth-place Connecticut set to play Minnesota later tonight. Though scoreboard watching is tempting, the Liberty love the positives they’ve gained from their recent stretch.

“I think that we’re figuring it all out,” Brittany Boyd said. “As long as these people in the locker room don’t panic, we’re going to be fine. We’ll leave the panic to everybody else. We know what we’re capable of. All we have to do is just play hard.”

Rodgers reached double figures for the first time since June 22, as her entry prompted an instant spark into the New York lineup. She shot a season-high 75 percent (6-of-8), and her outside prowess helped the Liberty prevent an 11-0 Chicago run in the second quarter from turning into another lost lead.

With Boyd’s return to the starting lineup, the odd woman out was Hartley. She didn’t let coming off the bench affect her game, however, as took over Boyd’s role of being a jack of all trades off the bench. In addition to 13 points, her first time in double figures since July 3, Hartley had six rebounds and five assists. Her efforts off the bench did not go unnoticed.

“I think what’s commendable is Bria Hartley coming off the bench and saying, whatever my role is, I’m just going to go out there and perform, and she definitely did that tonight,” Charles said. “That’s something all of us in this locker room can learn from. Whatever’s needed for us to win, everyone has to buy into it.”

Returning to the starting line up was no problem for Boyd, who missed a majority of last season and the first six games of this season with a tough Achilles injury. But if there was any doubt that Boyd, who entered Sunday’s games tied for fifth in the WNBA in assists per game, was back, it was snuffed out for even the staunchest Liberty doubter.

Boyd tallied a double-double against the Sky, nabbing a season-high 14 points and 10 helpers in her first start since May 2017. She said there was “no emotion” returning to the starting lineup, but was set to change the pace of the game once she was back in.

“I just knew that now it was up to me to kind of set the tone of how the game is going to go,” she said. “It’s just basketball. If I start, if I come off the bench, I embrace that role and try to do my job.”

How It Was Decided

After a strong first quarter, one that saw the Liberty lead by as much as 12, the Sky (7-15) were able to not only tie things up, but even briefly took the lead, leading by as much as five. But seeing so many leads disappear this season, the Liberty were determined to change the narrative.

With things knotted up at 45 late in the frame, the Liberty took advantage of a Chicago inbounds violation, as Rodgers put in a deuce to put New York back up for good. Back-to-back triples by Rodgers and Charles built the lead to eight, and the Liberty blew the game wide open in the ensuing third, crushing the Sky 26-8 in the third quarter. They would lead the game by as much as 27.

“It’s always important if you can get a shot going into halftime. (Shavtone Zellous) did a great job setting a screen, I just popped open, Z being an unselfish found me and I made the shot,” Charles said. “There’s been many of us in this locker room that’s done that before and it was definitely a momentum builder for us going into the halftime locker room.”

After this deeeeep three, @14Sugar now ranks 5th in franchise history from behind the arc ??#ShowUp? pic.twitter.com/KeL7Yk7knh

.@adifferent1five getting it done on both ends of the court! Steal ➡️ and-1 ?#ShowUp? pic.twitter.com/NKU3qd6Lfx

The Liberty find themselves involved in another afternoon weekday game on the road, taking on the Dallas Wings on Tuesday afternoon (1 p.m. ET, MSG+). This will be the third and final meeting between New York and Dallas this season, but the first in Dallas. The two teams have split their season set so far, the most recent matchup being the 97-87 Wings win on July 8.

“We got a huge one coming up on Tuesday. We got 100 points today, but they do that a little bit more regularly than we do. (Skylar) Diggins and (Elizabeth) Cambage are having a heck of a year,” Smith said. “I think it’s going to be a great test for us.”

NEXT: Zellous Buzzer-Beater Does Wonders For Liberty (HIGHLIGHTS)