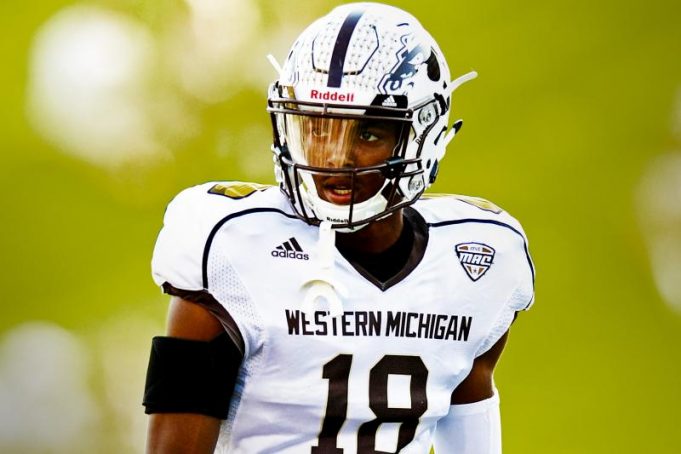 In the third round in Wednesday’s supplemental draft, the Giants added a highly touted secondary prospect from Western Michigan.

The New York Giants took Western Michigan defensive back Sam Beal in the third round of the NFL Supplemental Draft on Wednesday.

Bleacher Report’s Matt Miller was the first to report it.

Sam Beal to the Giants in Round 3

We’re very, very excited about getting Sam in the draft,” Giants general manager Dave Gettleman said, according to Michael Eisen of Giants.com. “He’s long, he’s very athletic for a corner, he has all the physical skills, he can carry the vertical, he has very good play speed, he shows instincts out there, he has ball awareness, he doesn’t panic when the ball is thrown at his guy, and he is a very willing tackler. We just feel it gives us a really talented young kid with the ability to ascend.”

Miller had previously described Beal as “the best supplemental draft prospect since Josh Gordon“. He was an integral part of Western Michigan’s undefeated regular season in 2016, a year that ended with the Broncos making an unexpected appearance in that season’s Cotton Bowl Classic in Arlington.

He ends his WMU career with 92 tackles, including two for a loss, and two interceptions, one of which victimized Sam Darnold in the Broncos’ 2017 opener against USC. After tallying 22 tackles and 10 pass deflections (ranking 6th in the Mid-American Conference), Beal earned second-team All-MAC honors, despite missing two games with an injury.

Beal, who played his high school football in Grand Rapids, Michigan, originally chose to stay for his senior season in Kalamazoo and was recently named to the first team preseason All-MAC squad. In June, however, he petitioned the NCAA to become eligible for the supplemental draft, and his request was granted.

As a result of selecting Beal, the Giants will forgo their third round selection in next year’s traditional draft. Beal becomes the third supplemental draft pick in Giants history, after quarterback Dave Brown in 1992 (first round) and cornerback Tito Wooten two years later (fourth round).

“We feel like we’re getting our third-round pick now,” Gettleman told Eisen. “We discussed it at length yesterday and had a great conversation. We basically had a draft meeting in the office, with people on the speakerphone who had seen him. It was a very thorough conversation.”

Beal and other Giants rookies will report to training camp on July 22.

NEXT: Saquon Barkley Is Positive About Eli Manning