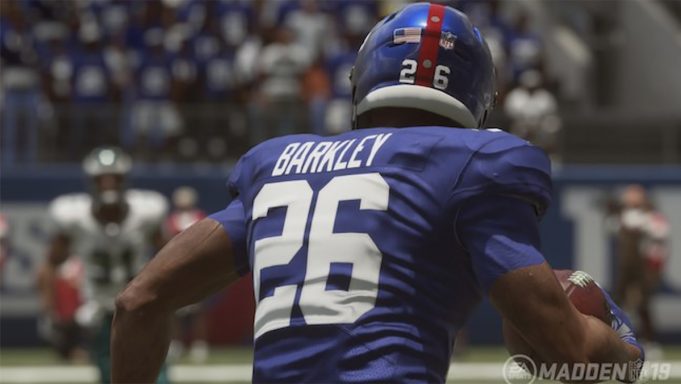 The summer of Saquon continued this week, as the second overall pick of April’s draft was revealed to be the top-rated skill-position player in Madden NFL 19, the latest installment in the popular football video game franchise.

His debut virtual counterpart earned a total rating of 82, just beating out the man selected ahead of him, Cleveland Browns quarterback Baker Mayfield. Sixth overall pick Quenton Nelson of the Indianapolis Colts leads all rookies with an 83.

In an analysis showcased on EA Sports’ official site, Barkley earned his rating primarily through a 92-speed attribute, as well as a 91 juke tally. The analysis goes on to conclude “he may be beneath veteran Jonathan Stewart on the depth chart, but his intangibles give him the elite-level potential”.

Barkley already made a pixelated cameo in Madden 19’s debut trailer at the Electronic Entertainment Expo (commonly referred to as E3) in Los Angeles last month, shaking off Philadelphia Eagles in a preview that also featured Mayfield and soon-to-be Hall-of-Famer Terrell Owens, who will grace this edition’s cover.

His successful summer would later continue with an appearance in the ESPN Body Issue, and the purchase of a new home for his parents in Allentown, Pennsylvania.

He’ll return to the Giants’ practice field on July 22, as he and his fellow rookies will report to Quest Diagnostics Training Center. Madden NFL 19 is set to hit stores on Aug. 10 and will be available on PlayStation 4, Xbox One, and Microsoft Windows platforms.