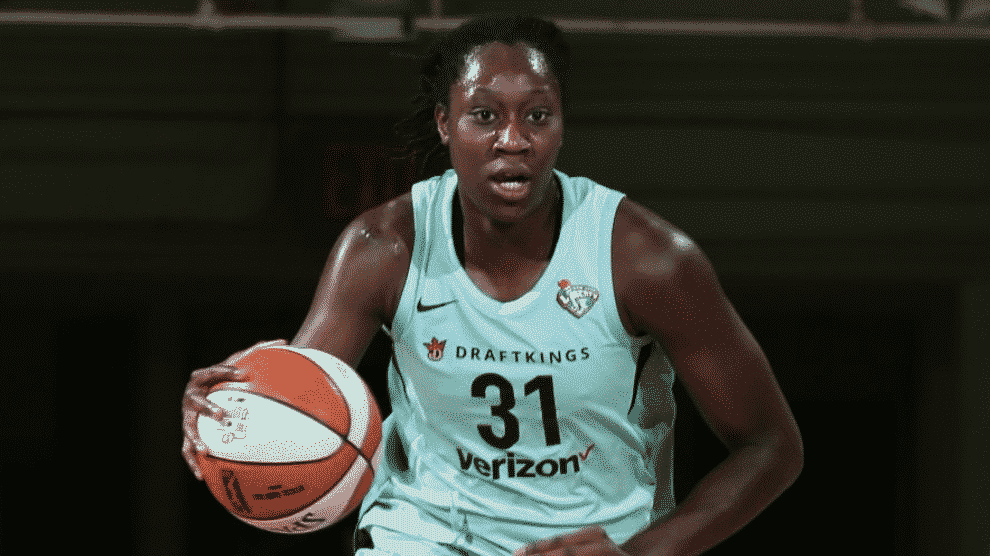 The New York Liberty suffered another heartbreaking loss, but head coach Katie Smith was pleased with the back-to-back effort.

A back-to-back set provided plenty of drama for the New York Liberty. What it lacked, unfortunately, was wins.

Five Liberty scorers reached double figures, paced by 24 from Tina Charles, but they weren’t able to prevent a similar offensive output from the Chicago Sky, who featured six players in double figures as they escaped from New York with a 103-99 win on Friday night.

Despite another tough loss, Liberty head coach Katie Smith was pleased with the effort displayed in both this defeat and the 80-77 buzzer-beating loss in Washington on Thursday.

“Our effort has been, I thought, some of the best for the whole year,” Smith recounted. “I thought that we’ve been locked, playing hard and together. (It’s) the little things, the not boxing out, the balls not getting on the floor, silly fouls here and there … those are the things that, throughout a ball game, kind of creep up and bite us.”

Another valiant effort from the Liberty (4-11) went for naught, as they once again failed to click on all sides of the ball. It was again the three-point that sank the demoralized the New Yorkers, as Chicago hit 11 triples, four in the fourth quarter alone.

“These are crucial points in ball games that we need to clean up,” Smith observed.

The Liberty have now lost five in a row, part of 2-9 stretch. Of these nine losses, four have come by a single digit, including last night’s Elena Della Donne heroics that cost them a game in Washington.

Rookie Diamond DeShields put in 22 for the Sky (6-9), who also enjoyed a double-double from Courtney Vandersloot (14 points, 11 assists).

Boyd continues to be a jack-of-all-trades off the bench for the Liberty. She was one of the five in double figures, earning 10 points, six assists, and three rebounds. Boyd, who got off to a late start to the season after finishing rehab from a 2017 injury, has been hopeful about the past few games and is optimistic the Liberty can work out of their funk.

“I think, for my main goal is to come in and bring energy off the bench. That’s my job,” Boyd said. “That’s what I have to do for this team, put some pressure off the bench. Just do my job playing basketball.”

.@tinacharles31 shows her scoring ability from outside and inside!

Charles up to 7 quick points on League Pass. #WatchMeWork pic.twitter.com/JuvK8oLuxD

Charles was slightly hobbled, enduring a slight thumb injury, which Smith described as a “job hazard” in Washington, but stilled managed to lead the team in scoring once again. She put in 24 points, including a pair of triples, as well as three offensive rebounds that expanded Liberty possessions.

“She’s playing through it. She got nicked a couple times,” Smith said.. “I’m proud of her effort, but also all of our players tonight.”

Charles once again made history throughout the course of the game, passing Tangela Smith for 17th all-time in scoring, ending the game with 5,066 career points. Swin Cash is next on the list with 5,119.

Libs ?'d in a tight one here in the fourth #ShowUp? pic.twitter.com/S9TFoArDB6

Prince’s past 48 hours have been more action-packed than Eddie Murphy’s, as she posted consecutive 20+ point games. Seemingly back at full strength after the injury that cost her the early portions of this season, Prince added 21 points in the win. Though the tally went for naught, she is developing into a consistent second scoring option behind Charles, and that could help the Liberty climb out of this hole.

“The last two nights, it’s been really nice to have her be able to contribute,” Smith said. “Not only is she a great scorer in a variety of ways, obviously three-balls, pull-ups, finishing, but she can also find people. She’s a good facilitator and passer.”

How It Was Decided

Making the Liberty’s season all the more painful is the number of close losses they’ve suffered. Two of them have now come against Chicago, as this nightmare began with an 80-76 loss at Wintrust Arena in May. The fourth quarter sealed the Liberty’s fate, as Chicago shot a whopping 71 percent (10-of-14), including 4-of-5 from three-point range to reach triple digits for the first time this season and clinch the victory.

Clutch free throws from Chicago likewise didn’t help the cause, as the Sky sank 22 of 26 charity shots.

The Liberty will finish off a home-and-home with the Sky on Sunday evening in Chicago (6:00 p.m. ET, MSG+). They’ll face off one last time to complete a quartet on July 15 in White Plains.