Despite an excellent starting duo in Jamal Adams and Marcus Maye, adding Kenny Vaccaro would represent a sneaky intelligent move for the New York Jets.

Marcus Maye at free safety. Jamal Adams as the strong safety. The two young NFL employees were selected by the New York Jets in consecutive rounds to kick-off the 2017 NFL Draft and due to the very nature of the hard-and-fast “two safeties” to a defense logic, it feels as though the team is set at the position for an incredible period of time.

Wrong, and it’s why snagging Kenny Vaccaro would be a sneaky steal for this organization.

According to Kenny Watkins of Newsday, the former New Orleans Saints first-round free agent will be visiting Florham Park later on in the week.

It’d be a shrewd pick up in more ways than one.

Despite the overwhelming praise dished out to Mike Maccagnan for buying into the position that’s surely becoming the most important defensively—due to a variety of reasons, mainly as a matchup deflator via tight end and running back—two safeties never get it done in this world of the NFL.

Throw out any standard thinking of what an NFL starting lineup looks like. It means nothing in this day of chucking the pigskin and points galore. The sub-package (3 WR, 1 TE, 1RB) with three or more receivers has overtaken the pro personnel (2 WR, 1 TE, 1 RB) set as the priority.

Additionally, the nickel sub-package on defense doesn’t automatically turn to the third corner on the roster. As time marches on and the three wide receiver-set (11 personnel) becomes the norm, third safeties leave their deep-thirds, deep-halves and centerfields to mix it up in the box as a linebacker—thus, birthing the Big Nickel or Big Dime.

Jamal Adams is that quintessential box safety. So is Kenny Vaccaro. Marcus Maye is a true centerfielder.

The Flexibility Is Endless

This about what the big dime would look like with Vaccaro in the fold. 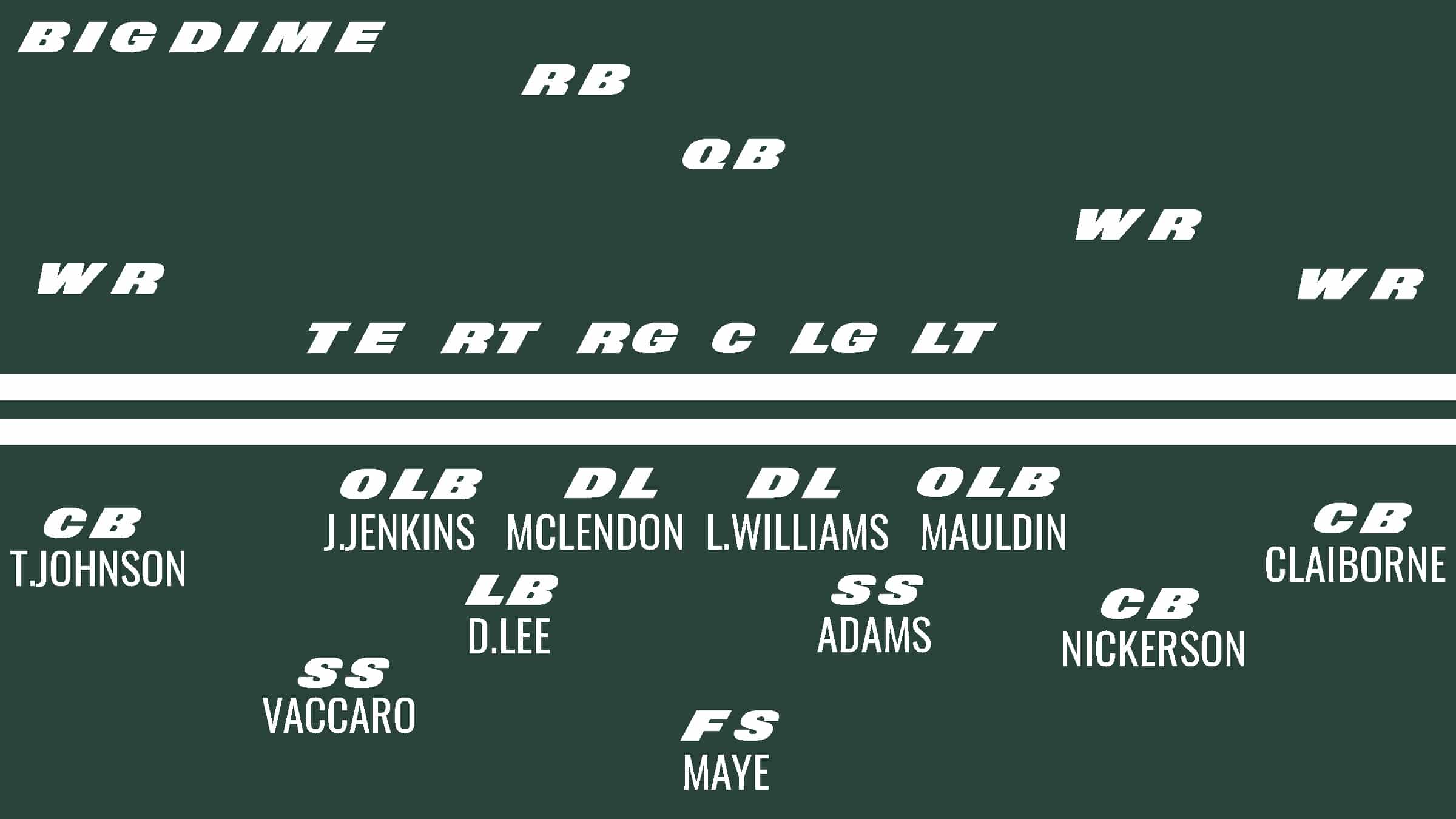 The above showcases a 2-3 big dime. Due to the nature of the personnel, the Jets would probably lean more on the 1-4 in which Avery Williamson is in while Steve McLendon catches a blow on the sideline.

In 2017, there were two men who held down that third safety spot. Early in the season, Terrence Brooks played a terrific deep half with Maye, allowing Adams to do his thing in the box.

Near the midway point to the end, it was Rontez Miles who manned down the position. This did not end well. Miles, as much as the coaching staff loves him, cannot play on the defensive side of the ball. His value lies within special teams and as a terrific character locker room guy.

The bottom line is this: the big dime with the three safeties and three corners against a three-receiver set (the most-used set in the NFL) can be used extensively and interchangeably with the regular nickel (with Vaccaro on the sideline and Darron Lee and Avery Williamson on the field together).

As long as Vaccaro can still get it done in the deep-half in this league, this big dime look could be lethal.

What options does a defense have when its pass rush cannot get to the quarterback with four players?

Not many, to be honest.

The way the league is played these days, blitzing comes with many sacrifices. The easy dink-and-dunk nature has destroyed heavy-blitzing schemes in recent memory. But when you’re up against it and employ nobody on the edge, the only route is to beef up the versatility on the back end.

In a single-high look with both Adams and Vaccaro on the field together, each edge would be represented with two versatile, do-it-all safeties. Each guy could man-up a tight end or back out of the backfield, drop to the flat, play the hook-curl and even get after the passer through any gap necessary.

The combo of versatile combo Adams-Vaccaro on both sides or one in the box and the other deep with Maye is the only way to battle a porous conventional pass rush.

Should Kenny Vaccaro look good this week, Mike Maccagnan should scoop him up immediately. This secondary is already one of the best in the NFL (though the pass rush destroys its credentials). Vaccaro could do wonders in 2018 as that third safety every legit defense requires.