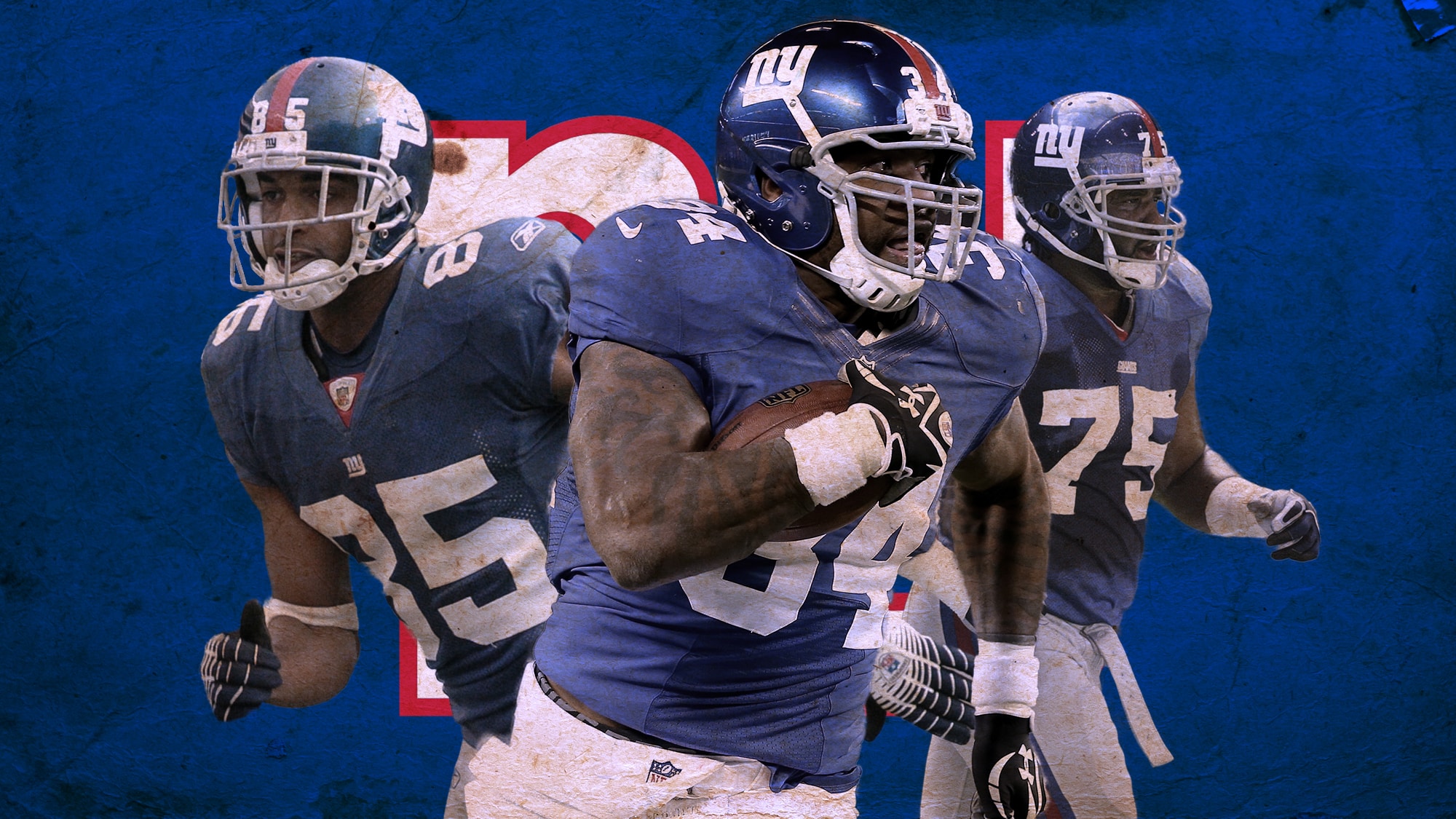 The New York Giants have drafted hundreds of players over the years. While the early round picks in the NFL Draft get all the attention, it’s the late-round guys who often play the biggest role.

It’d be easy—and rather boring—to sit here and rattle off the best draft picks in New York Giants history. Where’s the fun when you can name most, if not all of the players before you even click on a story?

So rather than talk about the best early draft picks the Giants have made in previous NFL Drafts—guys like Lawrence Taylor (second overall in 1981), Carl Banks (third overall in 1984) and Phil Simms (seventh overall in 1979)—we’ll focus on the best players they took late.

Hell, we’ll build a team full of nothing but late-round picks.

For the purposes of this exercise, we’re only going to focus on players selected in the fourth round or later. Additionally, a player must have spent the majority of his career with the Giants to qualify.

Who made the cut? Let’s take a look.

His best season with the Jints came in 1998 when he took over for the unproductive Danny Kanell in Week 12. He’d lead the team to a 5-1 record down the stretch, finishing the year with 1,219 passing yards, seven touchdowns and five interceptions.

You could make a case for Ahmad Bradshaw, “Fire” in the Giants’ “Earth, Wind and Fire” backfield, but it’s Jacobs, AKA “Earth,” who gets the nod here.

A two-time Super Bowl champion, the Southern Illinois product is the franchise’s all-time leader in rushing touchdowns (60) and sits fourth on the team’s all-time rushing yards list (5,087), one of only four Giants running backs to crack the 5,000-yard plateau.

Before the University of the Pacific produced colossal NBA bust Michael Olowokandi, it produced a quality NFL receiver in Manuel.

With the Giants relying heavily on their ground game and with tight end Mark Bavaro the team’s primary pass catcher, Manuel never got the chance to be the focal point of the offense in his seven years with the team.

When you’re responsible for what might be the greatest catch ever made—and you pull it off on the game’s biggest stage—you get a spot on the team, regardless of how relatively unproductive of a career you had.

With all due respect to Jeremy Shockey and Bob Tucker—both of whom have more receiving yards—Bavaro is the greatest tight end in franchise history, and it’s not even close.

One of the outright steals of the 1985 NFL Draft, Bavaro was a two-time Pro Bowler and two-time First Team All-Pro. Drafted out of Notre Dame, Bavaro excelled in all aspects of the game.

He was dubbed ”the [game’s] premier tight end” by Hall of Fame coach Bill Walsh in 1986, the same season in which he carried multiple San Franciso defenders, including Hall of Fame safety Ronnie Lott, more than 10 yards downfield on his back.

To be fair, there were only 13 teams making picks in the 1953 NFL Draft, but when you wind up with one of the best offensive linemen and a Hall of Famer that late, well, you brag about it until the end of time.

That’s especially true when (arguably) the greatest coach of all-time, Vince Lombardi, had this to say about the guy you drafted to the New York Times‘ W.N. Wallace in Nov. 1964:

“When you think of great tackles in pro­fessional football, you must think of Rosey Brown.”

Brown missed just four games over a spectacular 13-year career. He was a nine-time Pro Bowl selection and was named first-team All-NFL for eight consecutive seasons (1956-63).

He was also a member of the NFL’s 75th Anniversary team, the NFL’s 1950’s All-Decade Team and was part of the Giants’ inaugural Ring of Honor class in 2010.

Riesenberg was never selected to a Pro Bowl or named an All-Pro, but the engineering major out of the University of California provided the Giants with consistent, solid play for nearly a decade.

Part of the 1986 Super Bowl Championship squad, Riesenberg spent nine of his 10 NFL seasons with Big Blue, finishing his career in 1996 with the Tampa Bay Buccaneers.

Like Riesenberg, Ard was a solid, albeit unspectacular offensive lineman. The kind of guy who you never heard the announcers mention, which meant he was doing his job well.

Drafted out of Wake Forest, he provided the Giants with eight years of consistent play and, like Riesenberg, was a part of the franchise’s first Super Bowl Championship team in 1986.

You’d be hard-pressed to find a better—or more versatile—fifth-round pick in Giants history than Diehl, who was something of an afterthought when he was taken out of the University of Illinois.

Like Brown, he was incredibly durable, missing only 12 games in 11 years. A two-time Super Bowl Champion, Diehl played four different positions on the offensive line and was always one of the most popular guys in the locker room.

“When I think of David Diehl what comes to mind is his indomitable spirit,” then-Giants head coach Tom Coughlin said at his retirement press conference, via Michal Eisen of Giants.com. “He got the most out of his God-given ability and that’s the best way that you can judge any individual. He took the talent that he had and he used it to the extreme, to the utmost of his ability. What more can you ask of the guy?”

Larson was a solid, albeit unspectacular center who spent his entire 13-year career with the Giants.

Drafted out of the University of Minnesota, he spent his first two years in the league at right tackle and right guard, respectively, before becoming a fixture in the middle of the line.

Nobody expects a player taken in the 11th round to stick around for long—if at all. But someone forgot to pass that message along to Martin, one of the truly underrated players of his generation.

While he’s only credited with 46 career sacks, Martin’s true total is probably double that number, as he was one of the NFL’s premier pass rushers before sacks became an official statistic.

He had a penchant for turning turnovers into touchdowns, as he did in this 1986 game against Hall of Famer John Elway and the Denver Broncos.

He retired in 1986 as the NFL’s all-time leader in touchdowns by a defensive lineman with six, a record since broken by former Miami Dolphins star Jason Taylor. Martin was part of the Giants’ inaugural Ring of Honor class.

The Giants technically drafted Hall of Famer Buck Buchanan in the 19th round of the 1963 NFL Draft, but he was also the first overall pick by the Kansas City Chiefs in the AFL Draft that same year. He never suited up for Big Blue, so he’s ineligible.

Hamilton did—and he was a beast, spending his entire 12-year career as a Giant. He recorded two seasons with double-digit sack totals—11.5 in 1993 and 10 in 2000, when he was named a Pro Bowl alternate—and his 63 career sacks rank fifth on the team’s all-time list.

Katcavage spent his entire 13-year career with the Giants, most of it on a defensive line that included Andy Robustelli, Rosey Grier and Dick Modzelewski.

A three-time Pro Bowl selection and First-Team All-Pro in 1963, Katcavage was a huge part of the 1959 NFL Championship team. He retired with 96.5 career sacks, unofficially, as sacks didn’t become an official statistic until 1982.

Reasons spent all but one of his nine years in the NFL with the Giants and was a two-time Super Bowl champion during his time with Big Blue.

One was his 30-yard run on a fake punt against the San Francisco 49ers in the 1990 NFC Championship Game. The other—and far more memorable play—came against the Denver Broncos in 1989.

Elway had the Broncos in a fourth-and-goal situation on the Giants’ one-yard line. He’d hand the ball off to running back Bobby Humphrey, who was promptly met by an airborne Reasons, ending Denver’s chance of scoring.

Were it not for a torn ACL during his sophomore season at the University of Miami, there’s no chance that Armstead slides to the eighth round of the 1993 NFL Draft—and a pretty good chance that he never becomes a Giant.

Thankfully, things played out the way they did, as Armstead established himself as one of the great linebackers in franchise history—for a franchise that has employed some of the best linebackers the NFL has ever seen.

He made five consecutive Pro Bowl appearances from 1997-2001, was selected First Team All-Pro in ’97 and, after spending the final two seasons of his 11-year career in Washington, signed a one-day contract so that he could retire a Giant.

What is there to say about Carson that hasn’t already been said? He was the heart and soul of the Giants defense for 13 years, a nine-time Pro Bowler—including seven consecutive appearances from 1981-87—and a damn fine linebacker.

It took far too long, but in 2006, Carson finally took his rightful place alongside the game’s greats in the Pro Football Hall of Fame.

Along with Carson, Taylor and Brad Van Pelt, Kelley was part of the legendary “Crunch Bunch,” considered among many to be one of, if not the best collection of linebackers the game has ever seen.

His numbers were never eye-popping—it’s nearly impossible to stand out when you’ve got two Hall of Famers (Carson and Taylor) and a perennial Pro Bowler (Van Pelt) playing alongside you—but Kelley was a key part of the Giants defense for more than a decade.

Jackson was hugely productive over his eight seasons with the Giants, picking off 24 passes—two of which he returned for touchdowns. He also recovered seven fumbles, taking one of them the distance in 1983, his final season with Big Blue.

The San Diego State product never made a Pro Bowl but made life tough for opposing receivers and quarterbacks during his time with the Giants.

Williams was drafted by the Giants out of Grambling in 1965, spent 1966 with the Oakland Raiders and then found his way back to Big Blue in 1967, with whom he’d spend the rest of his nine-year career—and make his only Pro Bowl appearance in 1969.

He never took any of his 35 interceptions—includiang an NFL-high 10 in 1968—to the house, but hey, 35 interceptions from an eighth-round pick is a pretty remarkable feat in and of itself.

A first-team All-Pro for five consecutive years (1958-62), Patton’s 52 career interceptions are second-most in team history, behind only Emlen Tunnell.

When he retired in 1967, then Giants head coach Allie Sherman said, via the New York Times, that Patton “had the three qualities found in the best players —consistency, top performance and great heart.”

Nicknamed “Spider” by Tunnell, who was the Giants’ defensive backfield coach in Lockhart’s first training camp, he ranks third on the team’s all-time interception list with 41.

A two-time Pro Bowl selection, Lockhart started all but five of the 145 games he appeared in over his 11-year career, spent entirely with the Giants.