It took 81 games, but the New Jersey Devils never wavered and made the playoffs for the first time since 2012.

It took everything the New Jersey Devils had, including a 7-2-1 record in their last 10 games, but the Devils finally clinched a playoff spot. The last time the Devils were in the playoffs they went on a magical ride all the way to the Stanley Cup Finals, but they enter in a much different spot this time.

The Devils are the eighth seed in the Eastern Conference and a very heavy underdog. Most of the “experts” have the Devils losing in four-or-five games, but this team is far too resilient for that.

New Jersey was supposed to be in a rebuilding year, but we learned early that would not be the case. Taylor Hall put the team on his back all season posting a career high in goals, assists, and points. Taylor Hall will be competing in the postseason for the first time in his NHL career.

Another huge reason why the Devils are where they are right now is that of Keith Kinkaid.

Kinkaid had an absurd second half of the season playing basically every game down the stretch. Kinkaid started 41 games which are 15 more than the next most in his career. He also won 17 more games than he has in his time in the NHL thus far (25). That is the most by a Devils backup goalie since 2008-09 when Scott Clemmensen posted the same amount of victories.

Drawing the Tampa Bay Lightning will be far from easy for New Jersey, but every single time someone has counted this team out, they respond stronger than before. Let’s preview the series. 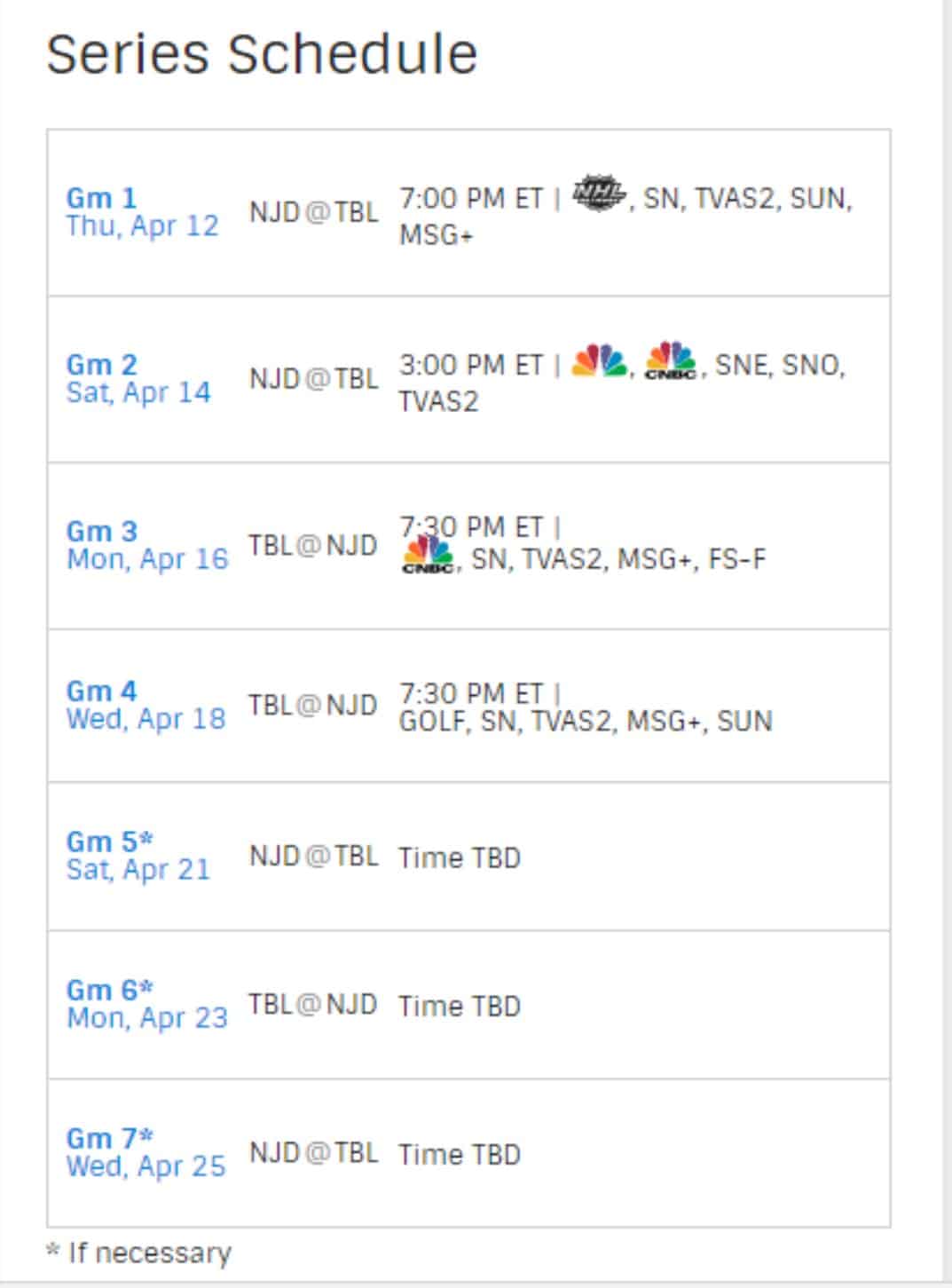 The Devils and Lightning faced off three times this season, and the Devils won all three meetings.

The first time they played was in October where the Devils defeated the Lightning in the shootout. Tampa entered that game at 5-0-1 on the season and the Devils played them very tight. Shots we’re essentially even and the Devils were able to beat Tampa.

In February the teams met for the second time, and the Devils were mightly outplayed. It took the best game of Eddie Lack’s NHL career and yet again the Devils just barely got by Tampa. Lack made 48 of 51 saves that night. If Jersey allows more than forty shots in a game in this series they will likely lose.

The final game between the squads occurred just three weeks ago in March. The Devils were coming off of their hardest road trip of the season, and a win over Pittsburgh the night before and pulled off a 2-1 victory.

The biggest problem with these games is that the Devils got dominated in shot attempts (outside of the first game). Combined in the last two games the Devils were out-attempted 150-88, granted they were defending leads in both of those games.

The current starting goaltenders are trending in different directions as we are ready to begin this series. Keith Kinkaid of New Jersey is hotter than any goalie in the league right now. Since the All-Star break, Keith Kinkaid has posted outstanding numbers and is a major reason the Devils are still playing games. Since the break, Kinkaid is 19-6-1 with a .922 save percentage, and 2.53 goals against average.

As for Cory Schneider, he has been far from good of late and he hasn’t won a game since the new year. December was also the last time he allowed less than three goals. However, despite these numbers, the Devils will still need Schneider if they are going to go on a deep run.

Andrei Vaislevskiy was unconscious prior to the All-Star break, but his numbers have seen a steady decline after the time off. He still has a really good record at 15-8-1, but that doesn’t tell the whole story. He has just a .902 save percentage, and 3.37 goals against average. His numbers were particularly bad in March where he went 5-4 with a .883 save percentage, and 4.14 goals against average.

Vasilevskiy has had playoff experience in the past, but this can be a chink in the armor for Tampa Bay. The Devils have a slight advantage coming into the series.

Both of these teams bluelines gained major additions during the season. The Devils sent Adam Henrique to the Anaheim Ducks for Sami Vatanen. It took a little while for Vatanen to get his feet under him but ever since then he has been the best defender on the Devils. In 57 games with the Devils Vatanen had three goals and 25 assists for 28 points. He has also done a tremendous job of buttoning down the hatch in the defensive zone. If the Devils have any chance to shut down Steven Stamkos and Nikita Kucherov it will be in large part because of Vatanen.

As for the rest of the Devils backend, it isn’t exactly the best, but with a combination of the forwards being defensively responsible, they haven’t been as big a liability as initially thought. It will be interesting to see what John Hynes will do with the lineup because Damon Severson has only played once in April. Mirco Mueller has stepped in and been a nice addition to the defense.

The Lightning also made major additions to the blueline right around the trading deadline. They acquired Ryan McDonagh from the New York Rangers who were sellers at the deadline. Mcdonagh has rekindled with his defensive partner from New York, Dan Girardi. Victor Hedman is far and away the best defenseman of not only the Lightning but the entire series. Hedman can play both ways along with shut down the opposing team’s first line.

From top to bottom I’d give the Lightning a small edge on the blue line, however with the speed of the Devils forwards, they can definitely give the Bolts a difficult time.

The forwards are the biggest gap in this series. The Lightning are better up front, but that is certainly not a knock on the Devils. Below are the lineups for both teams as of practice yesterday.

#NJDevils lines at practice, a final full practice before heading to Tampa. pic.twitter.com/cPHvJmsYaK

When the J.T. Miller, Steven Stamkos, and Nikita Kucherov line is on the ice for the Lightning the Devils have to do as best as they can to try and matchup Travis Zajac‘s line with them. It will be more difficult for that to happen in road games, but when the Devils are at the rock Zajac’s line has to be on the ice. Zajac has typically been able to keep Stamkos in check.

After the Stamkos line, Tampa is straight up deep. Every single player is capable of putting the puck in the net or creating plays. They are going to be a handful for Devils defensemen, and this will be a great test for a bunch of players with little experience in the postseason.

Another advantage that Tampa has up front is playoff experience. Five of the twelve everyday players up front for the Devils have played in at least one playoff game.

Despite the lack of experience, the Devils are deeper up front than a lot of people think. Nico Hischier‘s line with Kyle Palmieri and Taylor Hall has been great this season and has the chance to take this series over. They carried the Devils a majority of the way post All-Star break, and Taylor Hall is any defenseman’s nightmare. In practice coach John Hynes had Pavel Zacha with Stefan Noesen and Miles Wood, but don’t be surprised if the Devils need a goal and he goes with Patrick Maroon on that line. In the last week of the regular season, Maroon and Wood connected for a few goals.

Tampa has a sizable advantage up front.

It is going to be extremely tough for the Devils to win this series. If they are going to win the series it is going to have to be done in six games, and I believe that can happen. It all starts tonight in Tampa.

Enjoy Devils fans, you finally have something to root for in the playoffs that isn’t a team playing the Rangers.

NEXT: 3 Prospects To Watch In NCAA Tournament