For the past several seasons, the New York Giants ground game has been abysmal and consistently at the bottom of the league.

New York Giants history is littered with the names of great running backs. From Frank Gifford to Joe Morris; Rodney Hampton to Tiki Barber, Big Blue’s ground game used to be a force to be reckoned with.

That is until recently.

You have to go back to the 2012 season to find the team’s last 1,000-yard rusher, Ahmad Bradshaw. Not only was that the last season the Giants had a running back crack quadruple-digits, but it was the last time they finished in the top-half of the NFL in rushing.

Some of the reasons for the downfall of the Giants ground game has been due to underachieving running backs, but the primary reason for their inept ground attack has been due to a poor offensive line.

The line hasn’t been the same since a hip injury limited Chris Snee to just three games in 2013, an injury that would eventually lead him to announce his retirement in July of 2014.

But there’s hope that the line will be improved this season as general manager Dave Gettleman has signed free agents Nate Solder and Patrick Omameh. Gettleman will likely add a few more linemen in the draft to continue to bolster the offensive line.

Now the question that must be asked is this: Do they have the running backs that can give the Giants a balanced offense that they haven’t had in years?

With the Giants not having an interest in bringing back their leading rusher from a season ago, Orleans Darkwa, the top two backs on the Giants depth chart as it stands right now are Wayne Gallman and Jonathan Stewart.

Stewart was one of the first free agents the Giants signed this offseason. The 31-year-old spent the previous 10 seasons with the Panthers, where he rushed for 7,318 yards and scored 51 rushing touchdowns.

Despite averaging a career-low 3.4 yards per carry last season, Gettleman believes that Stewart has a lot left in the tank to have a significant workload in 2018. 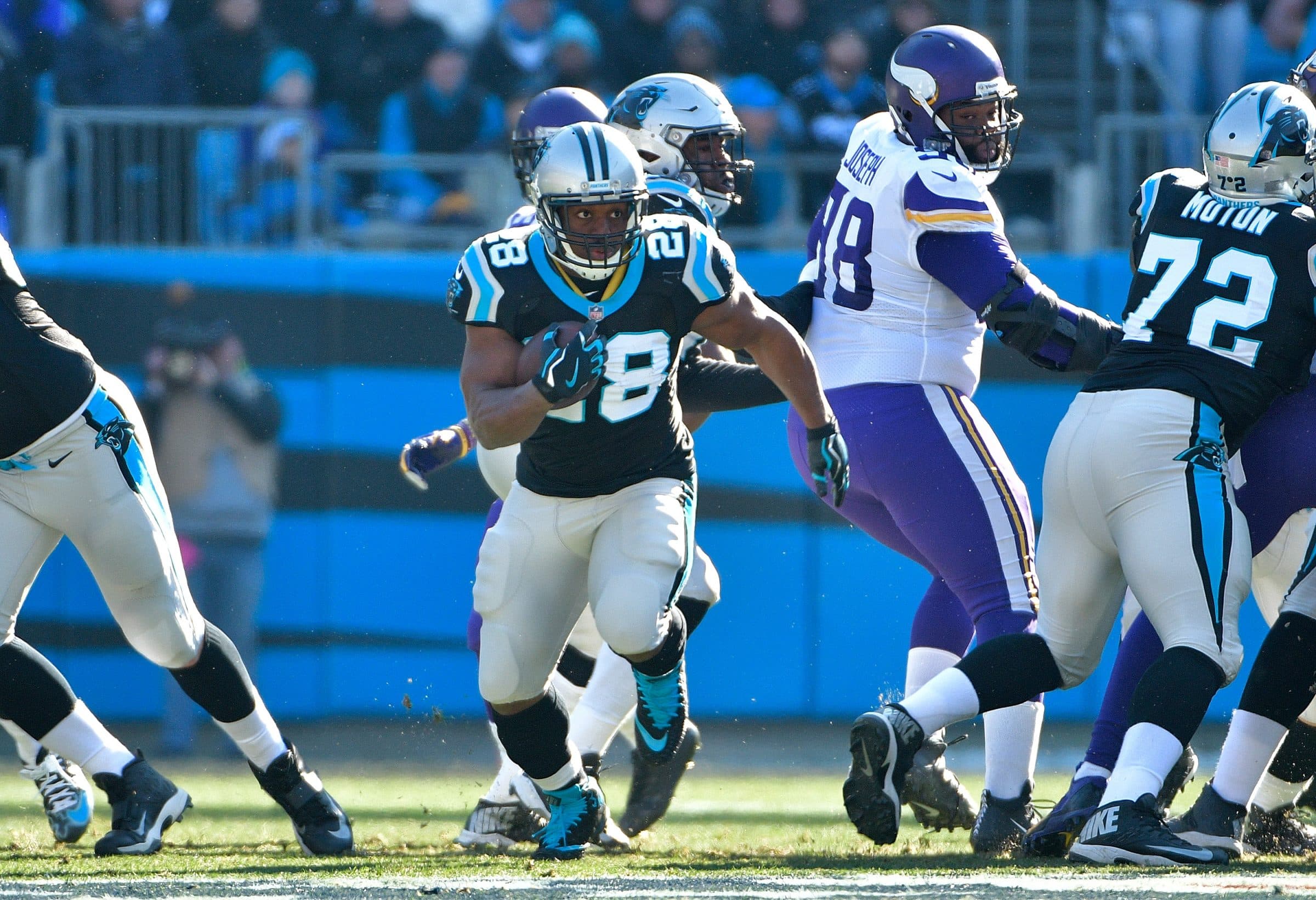 Stewart is the perfect candidate to be the Giants goal-line back, as he scored five touchdowns last season from inside the two-yard line. Goal line and short yardage situations have been an area the Giants have struggled in since Brandon Jacobs retired.

But perhaps his impact will felt the most as a veteran presence in the locker room, and a mentor to Gallman, who at the moment is expected to be the Giants lead back.

After helping the Clemson Tigers win a National Championship in 2016 when he rushed for 1,133 yards and 17 touchdowns, the Giants took him in the fourth round of the 2017 draft (140th overall).

After not playing in the first three games of the season, Gallman slowly started to make his way into the Giants running back rotation. By the end of the year, he was second on the team in rushing with 476 yards on 111 carries and caught 34 passes for 193 yards and one touchdown.

His numbers may seem modest but when you factor in that he did this with a subpar offensive line that had their three best linemen out of most of the season in Weston Richburg, Justin Pugh, and D.J. Fluker, he had an impressive rookie season.

Some may question if he’s ready to be a lead running back in this league, but Gallman has no doubts that he is ready.

Are the Giants 100 percent sold on Gallman and Stewart carrying the load this upcoming season?

There has been speculation and mock drafts that have the Giants taking Penn State running back Saquon Barkley with the second pick in the draft.

Barkley is seen by many to be the best offensive player in the draft and a can’t-miss prospect. In his final season at Penn State, Barkley rushed for 1,271 yards and had 18 rushing touchdowns. He also had 54 receptions for 632 yards and three receiving touchdowns.

The Giants may like the combination of Gallman and Stewart, but Barkley might be too good of a prospect to pass up, especially since he and Gallman can be running mates for years to come.

Perhaps Dave Gettleman will shed some light on what the Giants may do when he has his pre-draft press conference on April 19.