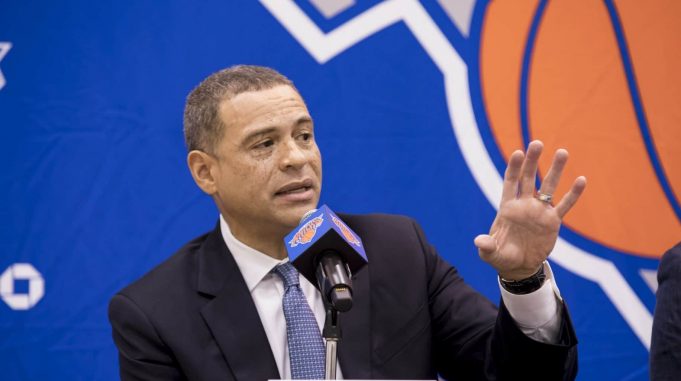 GM Scott Perry is indicating that the post-All-Star Break Knicks will have a youthful look and the Jeff Hornacek-Joakim Noah feud looks damaged beyond repair.

The playoffs are undoubtedly out of reach for the New York Knicks. That being said, there is still much for the Knicks to play for. Player development isn’t easy, but the Knicks have the opportunity to give some of their younger players a trial-by-fire.

According to ESPN’s Ian Begley, GM Scott Perry is hinting at a more youthful lineup for the sliding Knickerbockers. Begley asked him about the notion of providing some of the younger players on the roster with additional minutes down the stretch. Perry did well to avoid saying that the Knicks will go all in on the tank. He went on to say:

We understand the importance of young guys growing and developing with playing time, but I want this team to try and compete and still try to win each and every night…Obviously there are a lot of young guys deserving to play, we’re going to get them out there, competing, hold them accountable, continue to watch them all grow and develop…We want to continue to have a competitive environment . I think that’s what’s important, establishing a (competitive) environment.

This is the right way to approach things from Perry’s perspective. This shows a commitment to player development and letting the young guys get their opportunities without flat out tanking and taking away all opportunities from the veterans on the roster like Courtney Lee, Michael Beasley, and Kyle O’Quinn.

Guys like Emmanuel Mudiay, Luke Kornet, Trey Burke, Frank Ntilikina, and Isaiah Hicks deserve their opportunities, but if they aren’t performing it’s up to the coaching staff and front office to hold them accountable.

Say what you want about the Knicks as an organization, but there’s no denying the fact that Scott Perry has been a breath of fresh air. Unlike former Team President Phil Jackson, Perry is open and honest about his vision for the future. He doesn’t sugarcoat things but at the same time, he is calculated in his responses to the media.

The Joakim Noah saga has been unending. This was a bad contract from the moment Phil Jackson inked Noah to the megadeal that is currently haunting the Knicks. Over the weekend, Jimmy Butler expressed his thoughts on where Noah’s mindset was at. This wasn’t a huge surprise to anyone. He’s always been a fiery, competitive player and wouldn’t be happy being relegated to the bench.

Clearly, Noah’s frustration with his playing time, better yet his lack of playing time caused his relationship to boil over. After a physical altercation between the center and Jeff Hornacek, it’s pretty clear that this will be a tough relationship to salvage.

At the conclusion of the season, Knicks management will almost have to decide between Hornacek or Noah. There’s a good chance that the Knicks explore all of their options in an attempt to deal Noah, but there’s also a chance that they let Hornacek go in the offseason. If Hornacek is let go there’s a chance that the new coach could give Noah the opportunity he desires.

Over the weekend, Boston Celtics point guard and former Knicks trade target Kyrie Irving extended his praise and well wishes towards Kristaps Porzingis. According to Marc Berman of the NY Post, Irving had some kind words for Porzingis during Saturday’s Media Day at All-Star Weekend. Irving would go on to say:

“I told him I would love to play with a big like you, man, when we played them in the beginning of the season when he came to Boston.” Irving also stated, “He’s so versatile. So I wish him nothing but the best and hope he comes back even stronger.”

Right now things look bleak for Knicks fans and the 2019 offseason seems like a world away, but Irving is a free agent that offseason. Who knows, maybe the local product out of St. Patrick’s in West Orange, New Jersey would want to make a homecoming?

NEXT: 3 Reasons This Knicks Season Could Be Argued As A Success