The New Jersey Devils continued their hot start after wins against Florida and Chicago. Let’s see how they stack up against Toronto and Winnipeg.

The New Jersey Devils are coming off of a fantastic weekend where they took four out of a possible four points against Florida and Chicago. This puts the Devils at 11-4-2 on the season with 24 points. They are currently first in the Metropolitan division.

Here is how the standings currently shake out: 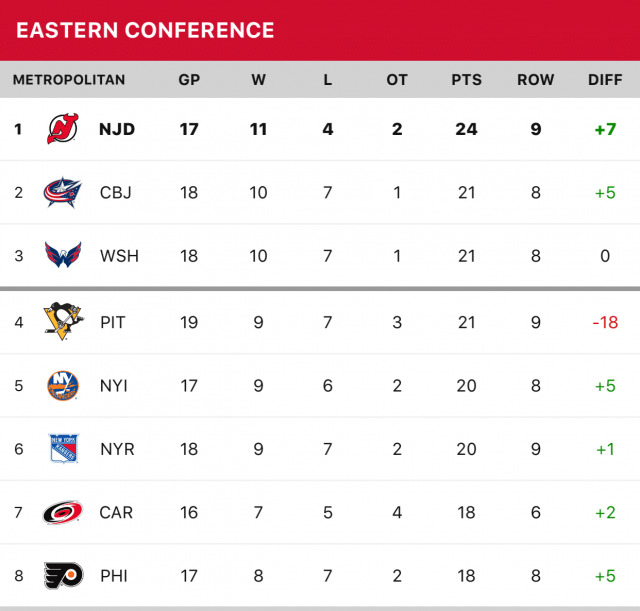 As exciting as it is that the Devils are leading the best division in hockey, they cannot take their foot off the gas pedal as all eight teams are separated by just six points. Roughly 80 percent of teams who possess a playoff spot at Thanksgiving make the playoffs in the NHL.

Let’s take a look at the Devils week ahead and the teams they will need to play to stay atop the division. The devils only have two games for the rest of this week, both on the road, against Toronto and Winnipeg.

The Maple Leafs are currently in second in the Atlantic division sitting at 12-7-0 at 24 points. This is going to be a tough one for Jersey’s team. They have to go to Toronto to play a young feisty team led by one of the best players in the league Auston Matthews.

Matthews already has 19 points (nine goals, 10 assists) and is just going to continue to improve. Matthews has missed the last week with an injury but he skated this morning before practice so he could be back at some time this week.

The Leafs were missing a couple of other players today during practice, but it appears right now that Nylander and Bozak will probably play.

Another thing to mention, even without Matthews, the Leafs have yet to lose. And they have the most goals in the NHL. Like the Devils, they have a high powered offense and a suspect blue line. I’m expecting a lot of goals in this one, and in Toronto, it will be a tough one to pull out.

The Devils road trip won’t get much easier as it continues in a Saturday afternoon contest with the Jets. This is the first time the Devils will play the Jets this season. The Jets are currently 9-4-3 with 21 points, which is good enough for second in the Central division. The Jets captain Blake Wheeler has provided a lot of the offense for the Jets this season with 23 points (5 goals, 18 assists).

Blake Wheeler hasn’t provided the only offense as Mark Schiefele, Patrick Laine, and Nikolaj Ehlers all have scored at least eight goals already. The Devils defensemen are going to have their hands full with this Jets team, and they are backed up by one of the hottest goalies in the league right now.

Twenty-four-year-old goaltender Connor Hellebyuck currently sits at 8-1-2 this season with 2.44 goals against, and a .926 save percentage. The Devils have not had trouble scoring this season, so it will be interesting to see how they match up against Hellebyuck.

It will be a successful week if the Devils can take three points in these two games. For right now they’re going to need to collect all the points they possibly can if they’re going to remain atop the division, at least until some of the other teams in the metro begin to fall back in the standings.